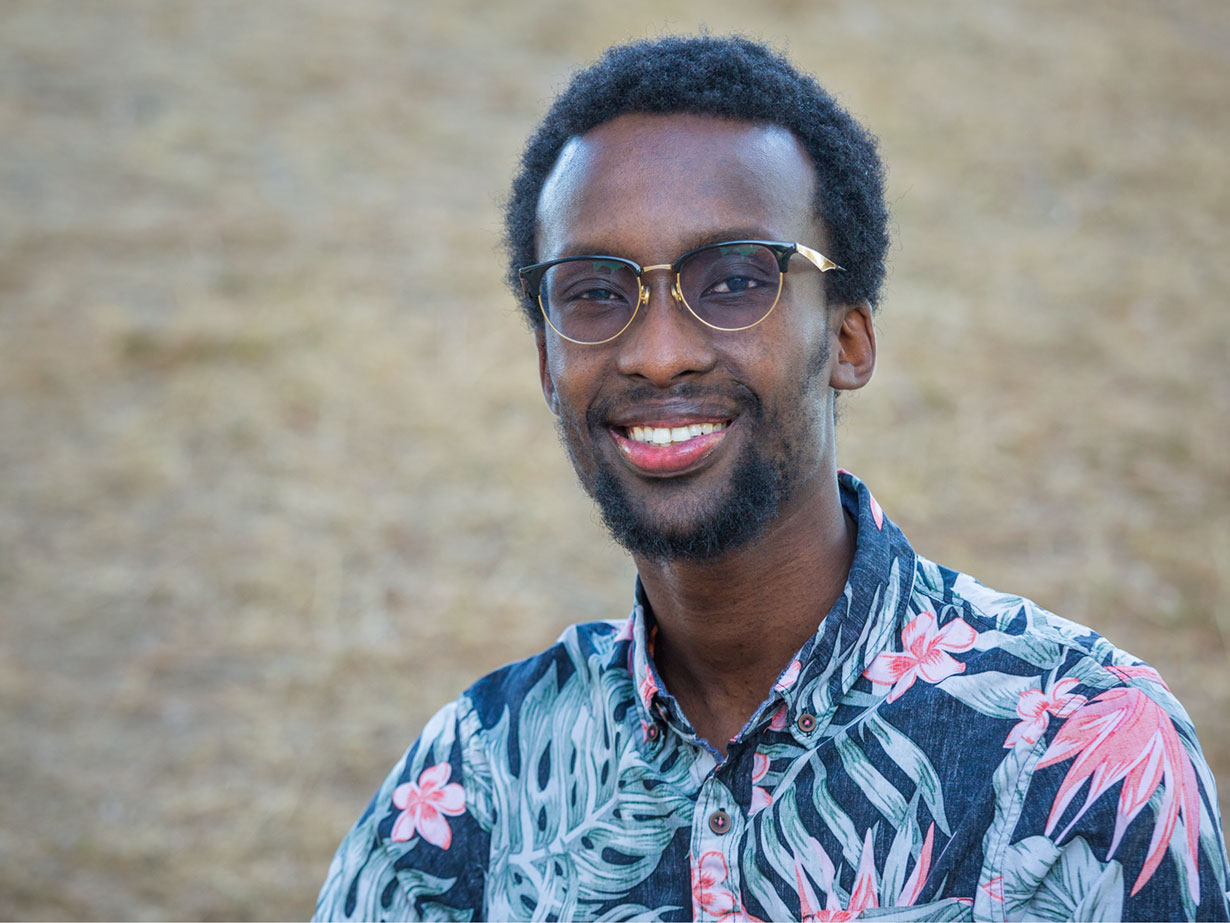 When Romy Ahounou was just a little boy in the Republic of the Congo, war broke out. “My parents put me and my brother in a suitcase and put us  under the bed while they went out to prepare for us to escape,” he says.

While their parents were gone, thieves broke in, but they left without finding the boys. Their parents returned and carried the boys out just in time. “As we left we saw a bomb fly, and then the whole house exploded,” he remembers.

Ahounou was born in Kigali, Rwanda, in 1995, a year after the genocide. His Beninese father and Rwandan mother were living in the Republic of the Congo at the time, but his mother had returned to Rwanda to check on her family, only to find that most of them had been murdered. During that trip, she gave birth to Romy.

Back in Congo, she reunited with her husband and other son. Then, in 1997, war broke out there and as the family fled, they decided to split up. Ahounou’s mother set out in a canoe with the two small boys, while his father stayed in Congo to save what assets he could before rejoining the family.

Romy, his mother, and brother settled in a little tin house in Kigali, Rwanda. But after a year with no word from his father, the family began to fear he had been killed.

Though Ahounou’s father also had no idea if his family was alive, he set out for Rwanda to look for them. “He didn’t speak the language,” Ahounou says, “he just had his wife’s name and the name of the neighborhood where she lived. He kept asking everyone he met and when he found us, my mom screamed ‘Here is your father!’ It was a very emotional reunion.”

In Rwanda, the family was joined by another baby brother. Ahounou and his older brother began going to Camp Kigali Primary School. “That was a camp where a lot of people would go and hide during the genocide,” he says.

The recent genocide remained a powerful presence. “There were a lot of houses with bullet holes,” Romy says. “And you would go in the bushes and sometimes see dead bodies, like a skeleton that still had a little bit of dry skin on it.” Although the genocide had happened before he was born, Romy felt like a target because he was Tutsi. Teachers at his school kept track of which students were Tutsis and which were Hutus, calling them out in separate groups.

Yet the community also took steps toward healing the trauma. Many evenings were spent around a fire outside roasting maize. “People would tell amazing stories of how they saved people in the genocide or how they escaped,” Romy recalls.

Although Ahounou’s dad was at a disadvantage as a Beninese in Rwanda, he completed a master’s degree, which eventually led to a job with the United Nations.

The UN paid for high school, so at 19 Ahounou decided to take the opportunity to become an exchange student in the U.S. He attended a small international high school in rural Oregon and, after graduation, moved to Portland, where he lived with host families and attended Portland Community College. He went on to Portland State University, graduating in 2020 with a degree in finance.

He works as an accountant at Good Samaritan Ministries and recently married a woman who grew up in southern Africa.

Coming to terms with the history of genocide in the country of his birth, he has struggled with the question: “He’s the one with the problem; he’s the one trying to kill me. Why should I have to be the one to work to make things better?”

But he reminds himself, “It needs to start also with me. The genocide against the Tutsis happened because of ideology and segregation. If I continue to think ‘they’ are the ones with a problem, I am recreating that same problem myself.’

He has adopted a philosophy of compassion. “When you want to create a better future generation you need to start by forgiving that neighbor who hurt you, love them, and move on,” he explains. “Because the moment where you start moving on is the moment where you are creating a life. It’s like giving birth. It is very painful, I hear, but if people chose not to be in that pain, there wouldn’t be life. So in order to create a life, there needs to be pain. It is worth it at the end of the day.”

One thought on “Building a Future With Forgiveness”