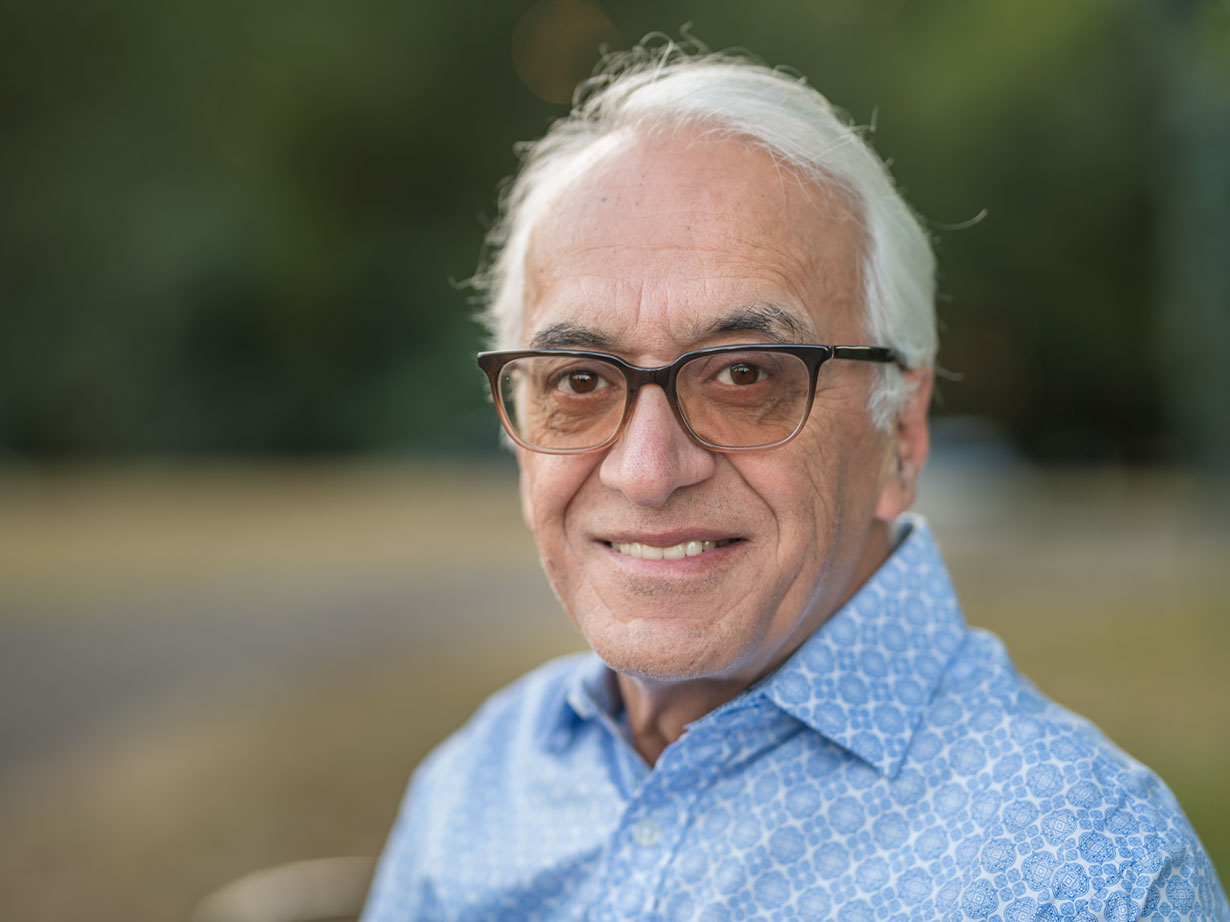 Shahryar Houranpay’s name translates to “the angels are with you.” “Shay,” the American moniker of this Iranian restaurateur, has needed all the angelichelp he could get.But sometimes even angels take a break, and Houranpay’s journey from Tehran to Portland, where he has lived for 36 years, has been a roller coaster of fortune—both good and bad.

He was born in 1948 in Tehran into a middle-class Iranian family; as he likes to say, “Our hands could reach our mouths,” which means they had plenty to eat. Under the Shah, Houranpay felt freedom and economic opportunity, while enjoying concerts and evenings at the theater. But perhaps his greatest stroke of luck was convincing a woman, who had left her husband one month into an arranged marriage, to marry him! They had twin girls (Sara and Mona), and life seemed rich and sweet.

But then in 1979 came the Islamic Revolution. Like most ordinary citizens, he had to be careful what he said in public, and his wife was constantly on the alert for the omnipresent hijab police. He frequently took to bunkers as bombs fell during the Iran-Iraq war, and was forced to serve in the military for a conflict he dreaded.

Though he’d studied mechanical engineering, without realizing it he was already beginning to prepare for his future profession as chef: it was in the army that he learned to cook. But given the repressive culture, he felt he had to leave his beloved country and, most painfully, his tight-knit family. So in 1985 his family came to the U.S. after a short stay in Germany. Luck held again: in New York his family encountered an obliging Customs officer who surprisingly spoke Farsi, welcoming Houranpay to America with cheering words: “You are a smart fellow.”

Because Houranpay had a cousin in Portland, here is where they landed. Feeling his best chance to make his way in the new land was to make and share the food he loved, he drew on his experience as an army cook along with memories of his mother’s kitchen, and opened Market Plaza, a restaurant cautiously featuring American along with Iranian food. Despite recent memories of the year-long seizure of the American Embassy in Tehran, Portlanders generously supported the place. Meanwhile Sara did not fare so well: grade school classmates viciously taunted her, calling her “sand nigger.” But worse was to come.

When the twins were 13, in 1991 they returned to Iran to spend a summer with their adored grandmother. But soon after they arrived, they were detained as spies! Houranpay surmises their arrest might have been retribution for his having left some years earlier and his known opposition to Khomeini. The girls were ultimately released and allowed to stay with their  grandmother, but forbidden to leave Iran. Their parents, back in Portland, could not know if they would ever see them again. Thrust into a now alien culture (religious police raided a co-ed teen party), Sara and Mona were objects of fascination for their Iranian contemporaries, but longed for the America they had come to know. Only after five long years, when they were 18, were they allowed to emigrate and reunite with their parents.

Market Plaza, meanwhile, was a hit; even Trail Blazers occasionally dropped by. But the success did not last: fire destroyed the premises and Houranpay had to move on to other ventures. Not to be deterred, with the guardian angels spreading their wings once more, Houranpay started Persian House in 1991. It was a place of culinary nostalgia for Houranpay, and one of its beloved hits was a favored, remembered treat: Kabob Torsh, a tart, aromatic dish from the Caspian Sea region of northern Iran consisting of filet mignon in a traditional sauce of walnuts, mint, basil, and pomegranate molasses.

Houranpay generously donated food to the homeless, helped Iranians with mental health issues, and supported owners of other Persian restaurants in Portland. As Persian House grew over the years, numerous members of the local Iranian community declared that Houranpay’s cooking evoked hallowed memories of their mother’s food.

But after three decades of culinary success, disaster struck. The angels had fled. Like so many other restaurants, Persian House succumbed to the pandemic. The restaurant closed for three months and when it reopened for takeout only, on many nights there were no more than a couple of to-go orders. Then, during the disturbances in downtown Portland in May 2020, rioters attacked the restaurant, smashing plate glass windows, looting valuable Persian rugs, and vandalizing the place. The place he had lovingly built over so many years was destroyed in a single night. To this day Houranpay shakes his head: “Who targeted us? Why did they do it? What had we done to anyone?” For a man who favored Black Lives Matter and gave so much to others in need, the gratuitous attacks were ironic and pointless.

He eventually repaired the damage, yet feared another riot. But as Shakespeare says, “When sorrows come, they come not single spies but in battalions.” As a result of the stress, Houranpay suffered a mild stroke. The final straw was the refusal of the restaurant’s landlord to renew its lease. Persian House closed in May, 2021, the end to a great run of 30 years.

Early retirement does not sit well with Shay Houranpay; the arc of his life and career shows a man with great determination and resilience. And so he plans to open a coffee shop along with a long-term employee from Mexico. It’s telling that he is joining with another immigrant, and hopes one day to help his new partner own the shop.

For many in Portland, as Houranpay summoned up culinary memories of their country, he came to represent Persian cuisine. Hailing from a civilization dating to 7000 B.C., this venerable restaurateur knows that even 30 years is but a blink of an eye. Because that civilization is deep in his bones, so many have benefitted from his unflagging energy and devotion to that culture.

As he plans his next venture, he’s hoping those angels hover overhead once more.