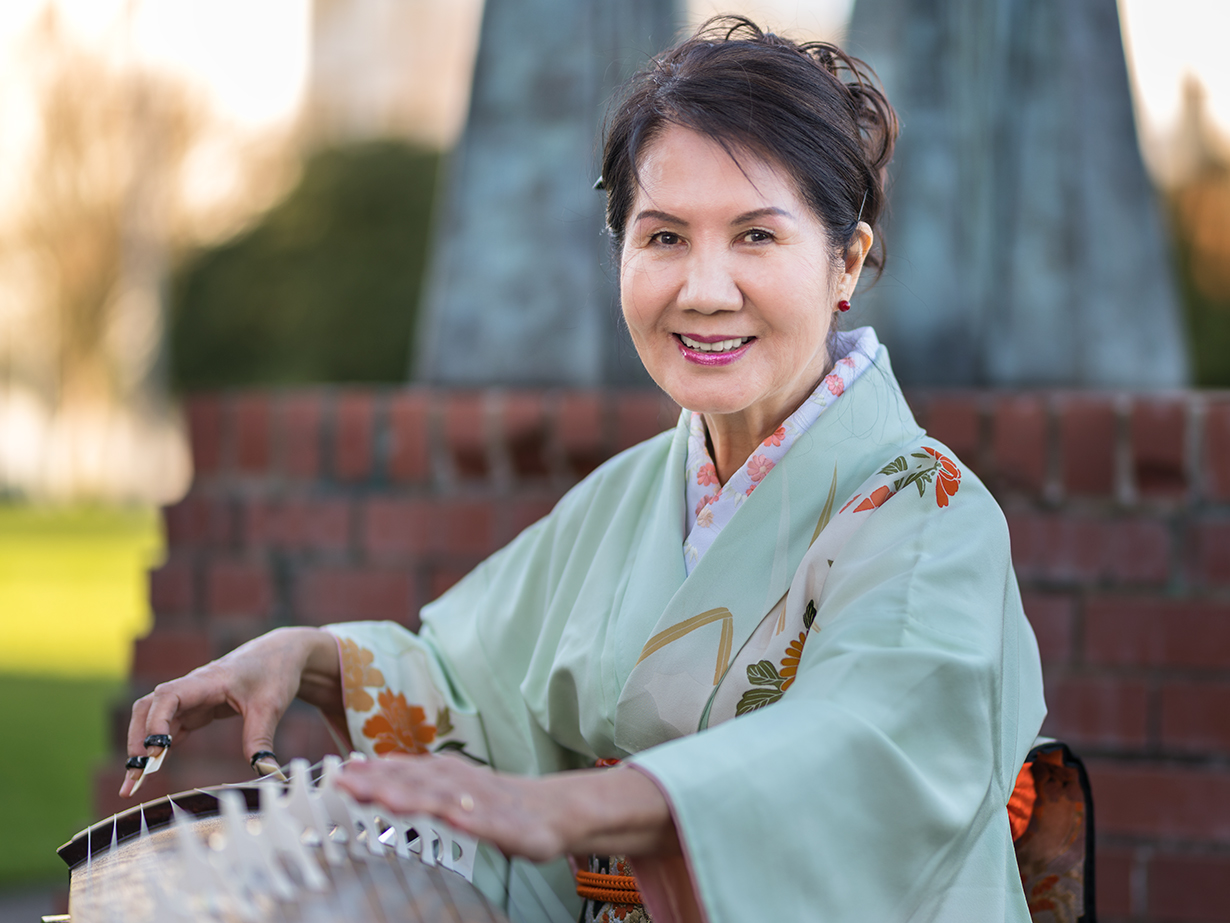 “I’m Japanese — how come I didn’t know this music?”

That’s what Masumi Timson thought as she sat captivated by her first koto concert.

“It’s a treasure of Japan,” she said of the traditional stringed instrument. “I thought, ‘Oh! I should take lessons. I should be able to learn how to play it.’”

It was that resolution as a young teen that would take Masumi far from home on Tokunoshima — the “Island of Virtue” — to Salem, Oregon. Though what brought Masumi to the United States is unique, it shares basic similarities with the lives of others at The Immigrant Story: the desire for a better life, an unknown future, sacrifice and hard work.

Now, several decades removed from that first encounter with the koto in Japan, Masumi is a master of the instrument. She’s performed in renowned venues worldwide, from Tokyo and Paris to the Hollywood Bowl and Carnegie Hall. She is a regular guest player with Portland’s Pink Martini and has also performed with legendary Japanese singer Saori Yuki.

Koto originated in China and was introduced to Japan beginning in the seventh century. A standard wooden koto has 13 strings and measures about 6 feet long by 10 inches wide. Players pluck the strings with picks and move bridges to alter the pitch.

Masumi was born on Tokunoshima, a small Japanese island with a population of about 27,000. Her father, a government worker, played the sanshin (literally “three strings”). Her mother ran a service station and would often sing along to her husband’s playing. Masumi herself played a little guitar as a hobby, but never imagined she’d become a koto master.

When it came time for higher education, Masumi moved to the Japanese mainland. It was there, while studying English Literature at college, that Masumi went to a koto concert and found herself immediately spellbound.

“I still remember,” Masumi said. “It sounded so peaceful to me. The sound was really striking and inspiring.”

And yet, despite its stature and prominence as Japan’s national instrument, Masumi had never heard it before. There weren’t many opportunities to hear koto on Tokunoshima. Most young people in Japan learned to play piano and were more interested in Western music.

Masumi began studying koto with a master at the prestigious Seiha Conservatory of Koto Music. And while teaching English on the side, she met her husband, an American and university professor. The couple moved to Oregon, where enthusiastic audiences for koto concerts inspired Masumi to continue her musical studies.

“The first time (Americans) hear this music, they get so excited and they ask me so many questions after the concert,” Masumi said. “I realized, ‘I should spread this wonderful Japanese music to American audiences.’ And I got really serious suddenly.”

That devotion to her craft meant many long nights of practice for Masumi, who sometimes neglected to eat and rehearsed until the sun had risen on a new day.

In Oregon, Masumi studied with a new koto master. She then traveled back to Japan to take a test administered by the Seiha Conservatory and officially became a shihan — or master — of the koto. She also found time to get a master’s degree in bilingual education from Western Oregon University.

When Thomas Lauderdale, the leader and pianist of Pink Martini, asked her to perform with his band, Masumi accepted. She played her first show at Portland’s Aladdin Theater with the self-described “little orchestra,” which has developed a worldwide following with its mix of classical, jazz and old-fashioned pop. Masumi found this cross-genre style appealing. The koto is a flexible instrument, Masumi said, and its distinctive sound is nevertheless well-suited for all styles of music, from jazz to tango to Mozart.

“If people are happy and they love my music, then I’m happy,” Masumi said. “That’s all I want.”

Often playing front and center stage in a flowing gown, Masumi said she is inspired by Pink Martini’s inclusive approach to musical culture.

“When you go to another country, you don’t really forget your own culture,” Masumi said. “You have to keep it, preserve it. When I play, I feel my identity, and at the same time I feel I’m part of this society in America.”