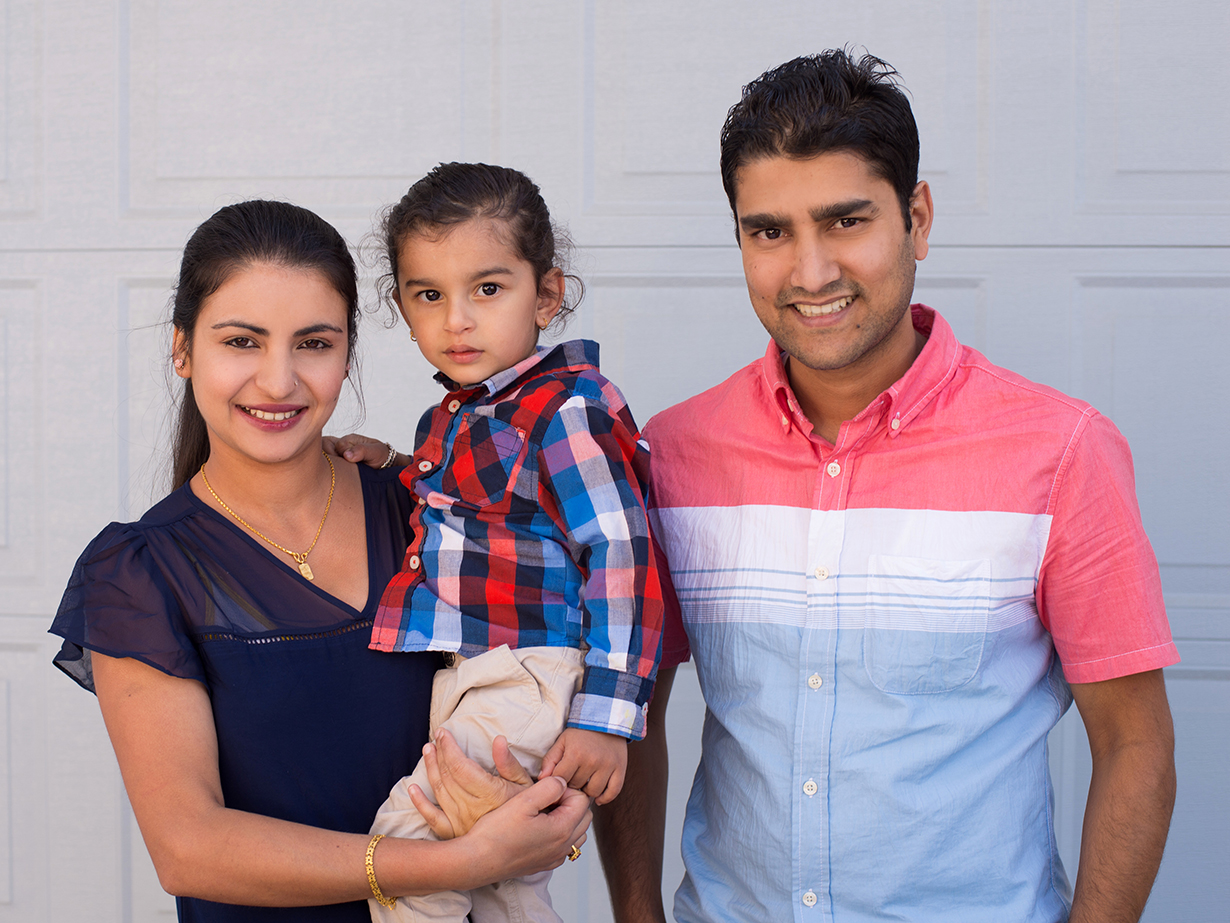 Neither Govinda nor Januka ever expected to own a house. Govinda Dhimal and his wife Januka Bokhrel both grew up in refugee camps in Nepal.

After childhoods living under thatch roofs and occasionally in tents in the woods, they finally have a place they can call their own.  Now, sitting in their living room in Southeast Portland, a colorful portrait from their wedding above the fireplace, they seem almost in awe of all this space: their very own home.

“It was so exciting to buy a house,” says Govinda.  “In the refugee camp we didn’t have an identity. Now we’ve become citizens, we really feel proud.”

The couple arrived in the United States separately.  Januka’s father, Yadu, was a farmer in Bhutan, but in the early 1990s, many ethnic Nepalese were forced out of that country.  They congregated in refugee camps in Nepal, waiting for negotiations between the two countries to arrange for their return. Januka was 9 months old when her family fled Bhutan; 19 years later, they were still waiting.  For decades, Yadu supported the family as a tenant farmer, cultivating local fields in exchange for food.

Govinda’s family had fled Bhutan when he was just a toddler.  He grew up without electricity, studying English by kerosene oil lamp.  Although he studied in local schools until 10th grade, there was no money for him to continue his education after that.  “Our own identity was formed in the camp,” he says. “We lived in a camp for 18 years with no future.”

In 2008, when Govinda was 19 years old, a fire broke out in Goldhap refugee camp.  It tore through the thatch-and-bamboo homes, destroying their few possessions, and the refugees fled again, into the jungle.  There they lived for months in tents, until an expedited visa process allowed them to come to the United States.

Govinda completed high school in Oregon, and soon found himself in a familiar position for many children of immigrants: translator.  He was the only one in his family who spoke English, and the family relied on him. Although he enrolled in Portland Community College (PCC), he had to balance earning money as an advocate for immigrant youth and families and translating for his family.

While at PCC, he met Januka.  They lived next door to each other and began to carpool to class.  A friendship began, but not immediately a romance. “It takes time.  We knew each other for a while,” laughs Govinda. Two years later, in 2014, they got married.

Back in the camps, both had separately dreamed about living in America and buying a house.  Now, as a married couple, they wanted to own their own little piece of land: “Instead of paying rent we will contribute our money so that helps in the future,” Govinda recalls thinking.

The couple continued to feel the pressure of being the family English speakers, and they both took a leave from PCC to support their parents and siblings.  It was something they were used to; both had worked in the camps starting at age 12, going to school during the week and picking up construction jobs on weekends.  Both now work within Portland’s Bhutanese community as interpreters and activists, Govinda as a Youth and Family Advocate with the Immigrant and Refugee Community Organization (IRCO) and Januka as a community health worker.

For Januka, being a part of the local Bhutanese community is a relief.  Her family had originally resettled in Wisconsin, where she felt isolated.  “There was nobody to help us,” Januka says. There weren’t many Bhutanese families there, and Januka’s family didn’t speak English.  As a teenager, she longed for a community that felt like her own. Now she tries to give back to new refugees what she missed: “When the new people come in, I show them where to shop, how to navigate,” she says.  She teaches prenatal classes, organizes rental assistance, and even throws occasional baby showers for new moms.

The couple, who are both in their late twenties, live in SE Portland, and are caretakers of Januka’s disabled brother and their young son, Ayan.  Her parents live nearby. This house, with its new countertops and high ceilings, is a sign that they are building a new life together.

Yadu putters in the back yard, tending tomato plants; his agricultural knowledge is helping to grow a garden for the family, with fresh food for Ayan.  Grandma Chitra calls her eight grandchildren, who have been settled all over the world, from Australia to California, by FaceTime. Both grandparents miss their home country.  “America has good food and good jobs,” Yadu says.“But we can’t forget.”

For Januka and Govinda, however, the United States is home.  They were too young to form many memories of Bhutan, and Portland is where they have chosen to build their lives.

“We had a home in the camp, but it’s not made like this,” Januka says.  “Here when we buy a house, we feel like we have a home.”