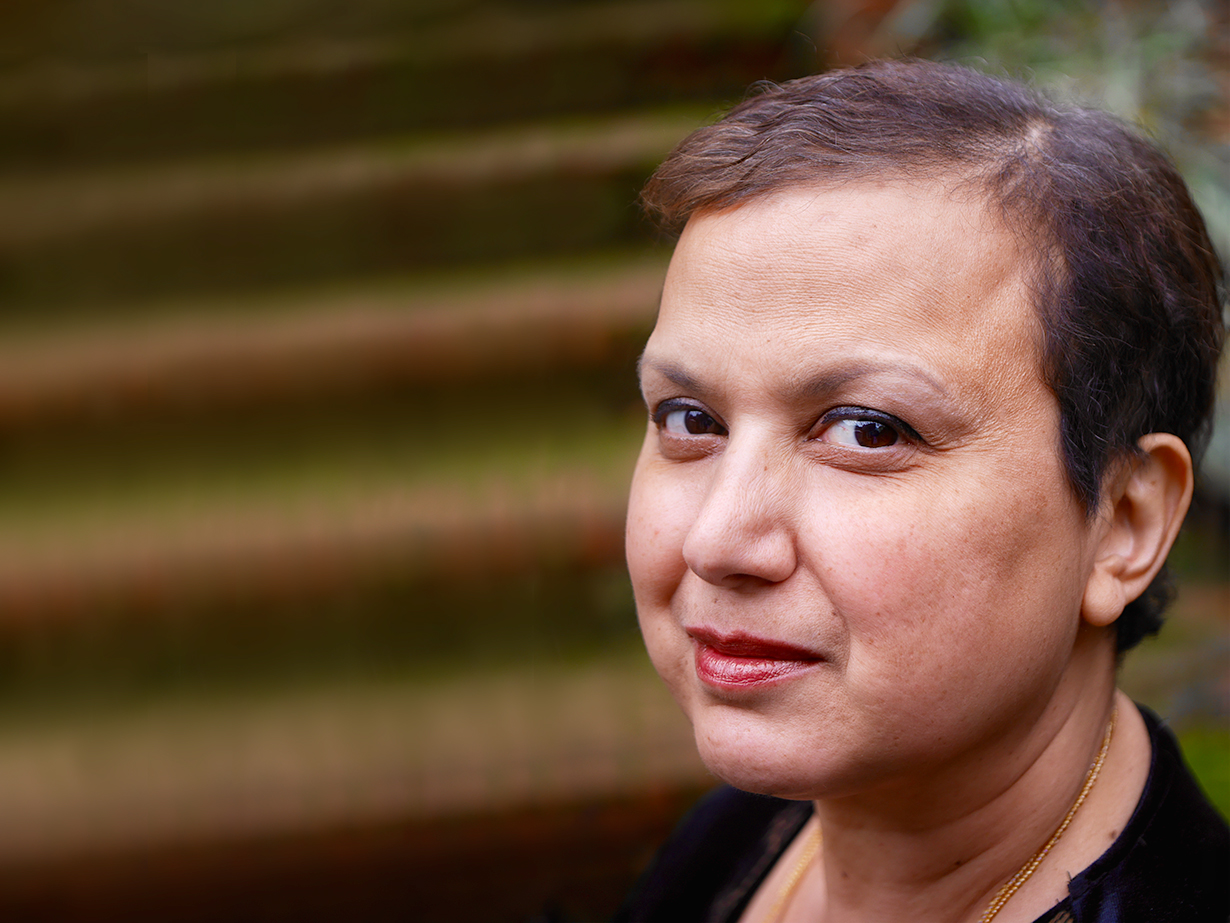 “That was when I became myself,”  says Ramiza Koya, remembering the backpacking trip she took in India when she was 25 years old.

Cross-cultural influences have always been a big part of Koya’s life. Her father was from Fiji, and her mother from the U.S.. Koya herself was born in Santa Rosa, California in 1970. Her parents divorced when she was very young, and her father moved back to Fiji.

Koya’s father was Muslim and Indian, but, growing up, she lived with her Caucasian mother and brother in the U.S. Longing for a sense that she belonged, she says, “I didn’t have an answer when people asked who I was, and who my family was.” Though she knew her father was religious, he died in an accident when she was 13 and she didn’t get the chance to learn Hindi or to learn more about Islam. It was in college courses, through travel, and in her own writing that she at last found ways to explore her Indian identity.

Koya studied comparative literature and cultural anthropology at Sarah Lawrence. After graduating, she took her savings and backpacked in India for six months in 1995. Koya “wanted to get to know India, a little bit like an Indian,” she explains. She wanted to see everything she could, so she “spent the whole time traveling,” criss-crossing south to places like Tamil Nadu and Karela, as well as north to Daramshala, and many places in between. Over the course of the six-month-long trip, she felt like she accomplished what she’d gone there to do: establish connections and build her knowledge. “Now,” she says, “I knew what I’d been missing… it was intense and hard and mind-boggling and amazing.”

For graduate work, Koya attended New York University, where she met her husband. During her first week of teaching at the State University of New York (SUNY), her world changed drastically. She worked across the river from the Twin Towers, so when the towers were attacked on September 11, 2001, she had to dismiss her class and head home, while her husband rushed toward the disaster to photograph it. Overwhelmed, she sat on her front stoop and watched as soot-covered people walked down the street.

Now, there was no escaping that her name identified her as Muslim. Koya lived in a neighborhood with a large Muslim population, and she soon got the sense that they were all under constant surveillance. New York City, which she loved for its diversity, now became hostile. “I couldn’t live in this country the way I thought I could,” she says.

During the next several years, Koya and her husband spent time out of the U.S., teaching in Spain, Prague and Morocco. Teaching abroad connected Koya’s passions of traveling and writing. Their daughter was born in Morocco in 2008, and the family moved to Portland soon afterwards.

Koya’s novel, The Royal Abduls, deals with the post-9/ll world she was forced into on that morning in her New York neighborhood. Released in March 2020, the book follows Amina Abdul and her young nephew Omar as Omar becomes desperate to connect with his Indian heritage, while the adults around him have in some ways tried to escape it. He struggles to understand his world, asking logical questions nobody has answers to. Meanwhile, Amina faces gender discrimination at her laboratory job. “It’s really about the question, how long does it take to become an American?” says Koya.

Koya explains that she got her idea for the Omar character while teaching elementary students in New York as part of Teachers and Writers Collaborative. A young Egyptian-American boy in the class had been bullied and had a cast on his arm from it, so Koya crouched beside his desk and wrote in Arabic with him. Like Omar, the boy found joy in connecting with his roots. Says Koya, “There were probably a lot of Omars out there.” The Royal Abduls, which began as a short story about Omar, puts faces to the real-life experiences of immigrants from South Asia in the U.S., particularly secular Muslims.

The book started out as a short story, but grew into a novel that was a culmination of Koya’s interests. Like Amina, at the time of writing the story Koya didn’t know if she’d come to want kids. Now she lives with her daughter Ofelia. “I almost feel like I wrote her into being”, she says.

Koya, now Director of Youth Programs for Portland’s Literary Arts, is currently dealing with many uncertainties. She’s a cancer patient, as well as a debut author whose book was released in the middle of a global pandemic. But she’s sure about the book she’s written and the message it carries, saying, “I could’ve written any book, but this is the book I wanted to write.”