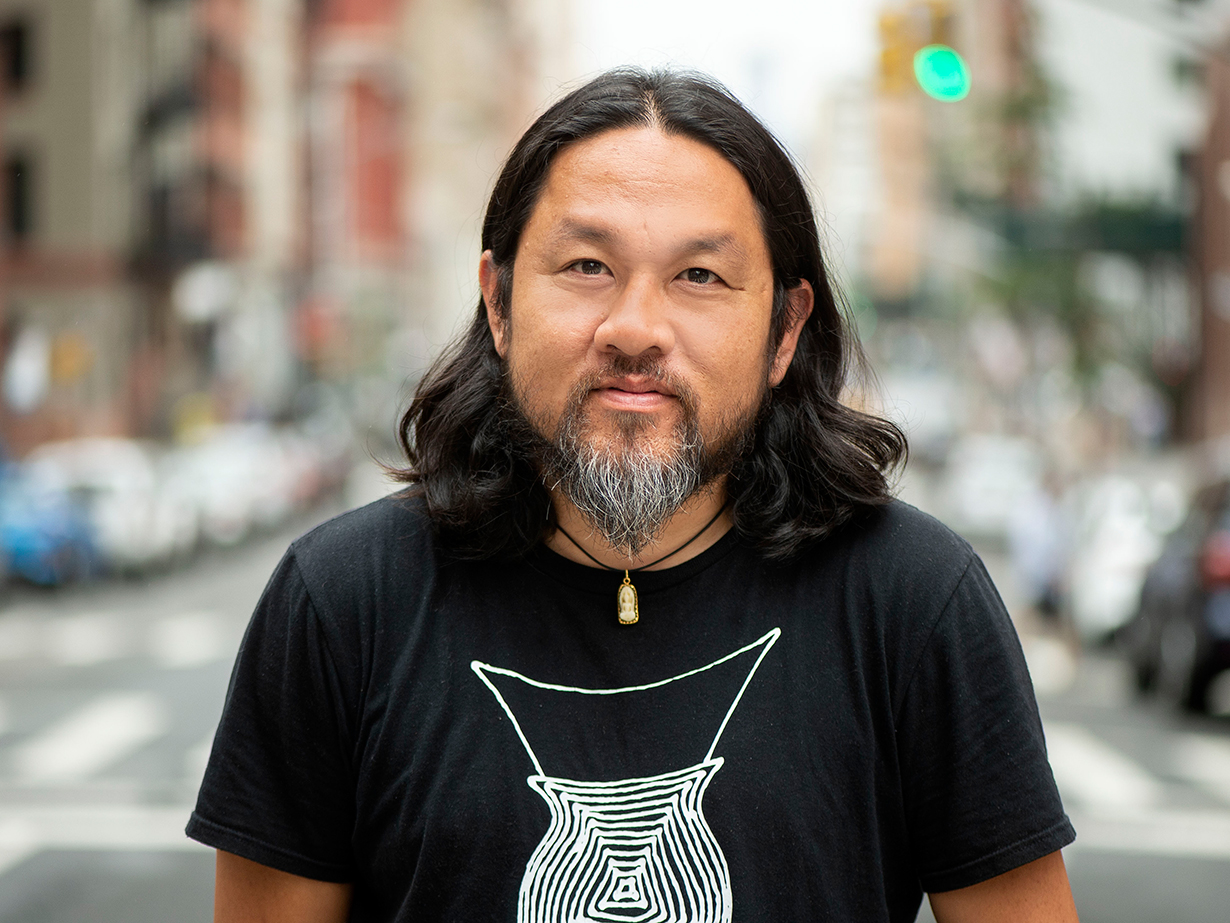 The first thing to know about Phet Schwader is that his first name is pronounced “Pet.” Unless it marks the start of a word, the letter “H” is typically silent in the Lao language.

The next thing to know about Soulayphet Schwader, to use his whole name rather than the diminutive he prefers, is that his surname came from his stepfather, the American man who married his widowed mother in 1980 after she brought her three children to the United States from a Thai refugee camp.

Still more morsels to understand about the co-owner and head chef of the Khe-Yo restaurant in New York City’s hip Tribeca neighborhood: His “kitchen Spanish” is much more fluent than his command of Lao. He loves the American Midwest, where he grew up, and believes that’s where he learned the values of hard work and respect for others. He studied philosophy at the University of Kansas but came nowhere close to academic stardom. A girlfriend who was attending graduate school in New York City prompted him to choose an East Coast culinary school. Today, Phet thinks of himself as a New Yorker first. With the city he calls home, he harbors a full-time love-hate relationship.

Now with his city under coronavirus lockdown — with urban nerves frayed and with every ride on the subway a horror movie featuring predatory germs as villains — Phet says, “I (expletive) hate it.”. Even though, he is quick to add, “it has given me so much.”

Phet was an infant in his mother’s arms when the family fled Laos following the communist takeover toward the end of the Vietnam War in 1975. He has no memory of the treacherous trip across the Mekong River in a small and rickety wooden boat.   It is only family lore that has reminded him that his mother, who could not swim, was terrified that the boat might capsize.

Likewise he remembers nothing of the Nong Khai refugee camp in Thailand where the family waited a year to obtain paperwork to enter the United States. In fact his first real memory begins with their arrival in Kansas, home to a sizeable Lao community that included the aunts, uncles and cousins who greeted them effusively at the Wichita airport.

But the welcome had a bittersweet quality. Phet’s father had died at Nong Khai, so his mother was launching a new life as a widow with three young children.

This is where Phet’s memories kick in. The family lived on a dirt road on the west side of Wichita. As the youngest — so young he barely spoke Lao — he was the first to become fluent in English. He relished what he called a typical Midwestern childhood: hunting, shooting and playing club soccer. He had birthday parties at Chuck E. Cheese. He thought Pizza Hut was a three-star restaurant.

His U.S.-born friends embraced him. In kindergarten, they decided Phet should marry the only other Asian kid in the class. Evidently they were unaware that a Korean-born girl who had been adopted by an American family and a boy born in war-ravaged Laos might have little in common.

That was long ago.

“At this point,” Phet says now, “being a New Yorker, I don’t really give a (expletive) what people think of me.”

To support himself  at the University of Kansas, Phet worked as a fry cook. What he saw in those kitchens did not impress him. Just about every chef he knew was an alcoholic by age 30, self-medicating as an antidote to long hours and grueling conditions.

Some of his bosses felt he had potential and encouraged him to study cooking. Phet was not persuaded.

“I had just wasted five years on college,” he said. “Why would I want to go to culinary school?”

But there was his girlfriend and, somewhere inside him, a tickle of curiosity about the East Coast. He enrolled at the New England Culinary Institute in tiny Montpelier, Vermont.

There, in a cloistered, blindingly white community, he came face to face with the first real bigotry he had ever encountered. One Saturday night, he and some classmates took seats in a dive bar called Charlie-O’s. Suddenly, a guy in an Army jacket approached and told them their money was not welcome there.

At first Phet was touched. He thought the man was going to buy their beers. But the message was quite the opposite. Phet and his friends beat a hasty exit.

One culinary school externship brought him to Dundee, Oregon, where he learned about terroir and wines. Another externship took him to Manhattan. Along the way he also cooked in Boston and Washington, D.C., always at top spots.

For Phet, New York was its own kind of culinary education. First, he came to realize how little he actually understood about the labyrinthine world of restaurant life. Most important, he says, “it also made me realize that you have to fall in love with what you do. Being good enough is not enough. You have to love it. That is what New York taught me.”

In Manhattan he ran the salad station at AZ, a well-known restaurant run by Patricia Yeo. Yeo herself had dropped out of Princeton University to cook, just shy of earning her biochemistry degree.

“Patricia was very eclectic,” Phet said. She also urged collaboration and creativity and often turned to Phet to explore new flavor combinations with Lao staples such as banana leaves and sticky rice. Within six months, he was promoted to sous chef.

“I was still so young,” he said. “I was just a sponge that absorbed knowledge.”

Wherever he worked, even while preparing crisp Caesar salads, crunchy fries and succulent steaks for K Street lobbyists as chef de cuisine at Washington’s BLT Steak, Phet felt a quiet longing to return to the Lao food of his childhood. Sure, as a kid he had gobbled down American junk food.  But dinner time in his childhood home always meant a sit-down meal centered around recipes his mother had learned by heart in her own Lao childhood.

Sticky rice was an essential element, and so was padaek, the pungent fish sauce that is known more colloquially in this country as funk. Every Lao house that Phet visited in Kansas had a container of this sauce, he remembered, off in a corner, fermenting under layers and layers of plastic wrap. So malodorous is this Lao kitchen staple that even today, Phet warns his kitchen staff on the days that he is mixing it so they can stay away from the smell.

Phet was 35 years old and between jobs when he made his first return visit to Laos. One goal was to see the country he and his family came from. Another was to answer a question that had gnawed at him about his culinary future.

If he had doubts, a review in The New Yorker magazine shortly after he and a partner opened Khe-Yo in 2013 should have put them to rest. Never, gushed the reviewer, had she had such a delicious pig face salad. Around the same time, the New York Times weighed in with equal enthusiasm.

“Going back to Laos,” Phet said, “it gave me a good, rooted sense of who I was and where I came from. That was what I needed.”

Phet made other trips back to Laos, including an emotional journey where he and his mother located his father’s grave and were able to give his remains the proper river burial their culture advocates. His pilgrimages have also honed the cultural perspective of a successful U.S. chef who as a baby had fled a developing nation.

“I just so appreciate growing up in the United States,” he said. “Small things — things you don’t usually think about, toilet paper, clean drinking water — they are so common for us.” But less so, he observed, in a poor country like Laos.

Phet, now 45, has a sturdy build and a face he says his friends in Kansas insisted was Native American. He wears his hair pulled back in a ponytail, and sports a black T-shirt with the logo of his restaurant, an arty depiction of a Laotian rice basket. He met his wife, Amanda Allman — born in Colombia and adopted by U.S. parents — while both were working in Boston. They share an apartment in New York’s Financial District, just a few blocks from the World Trade Center, with a Havanese dog named Oscar. In the face of the pandemic, Phet said, the normally bustling area is a veritable ghost town.

Khe-Yo, a 75-seat establishment, is open for takeout and delivery only. Phet also has been providing meals for pandemic first responders, including hospital staff, police and firefighters. Slowly, he is bringing his kitchen staff back to work, all of them cooking in masks and gloves. All the while, Phet wonders how his business will look if coronavirus restrictions are eased.

He knows for certain that until a vaccine is widely available, the days of packed restaurants — 75 tables filled with hungry customers, in his case — are over.

“As a business model, it doesn’t work for me to plan for half of my seating for the next year and a half until there is a vaccine,” he said. “How can I move forward as a business model? Who knows? I have no clue.”

His 70-year-old mother, meanwhile, has not left her own home in Kansas for more than a month. Phet worries about her, but notes that she is strong, a survivor of hardships who has outlived three husbands, and has forged a new life in a new country. Whenever he speaks to her in these days of corona confusion, she reminds him that things could be a lot worse.

Soon enough, he hopes to see her — because whenever he goes home, “Mom does all the cooking.”

One thought on “A Career Wrapped in Banana Leaves”