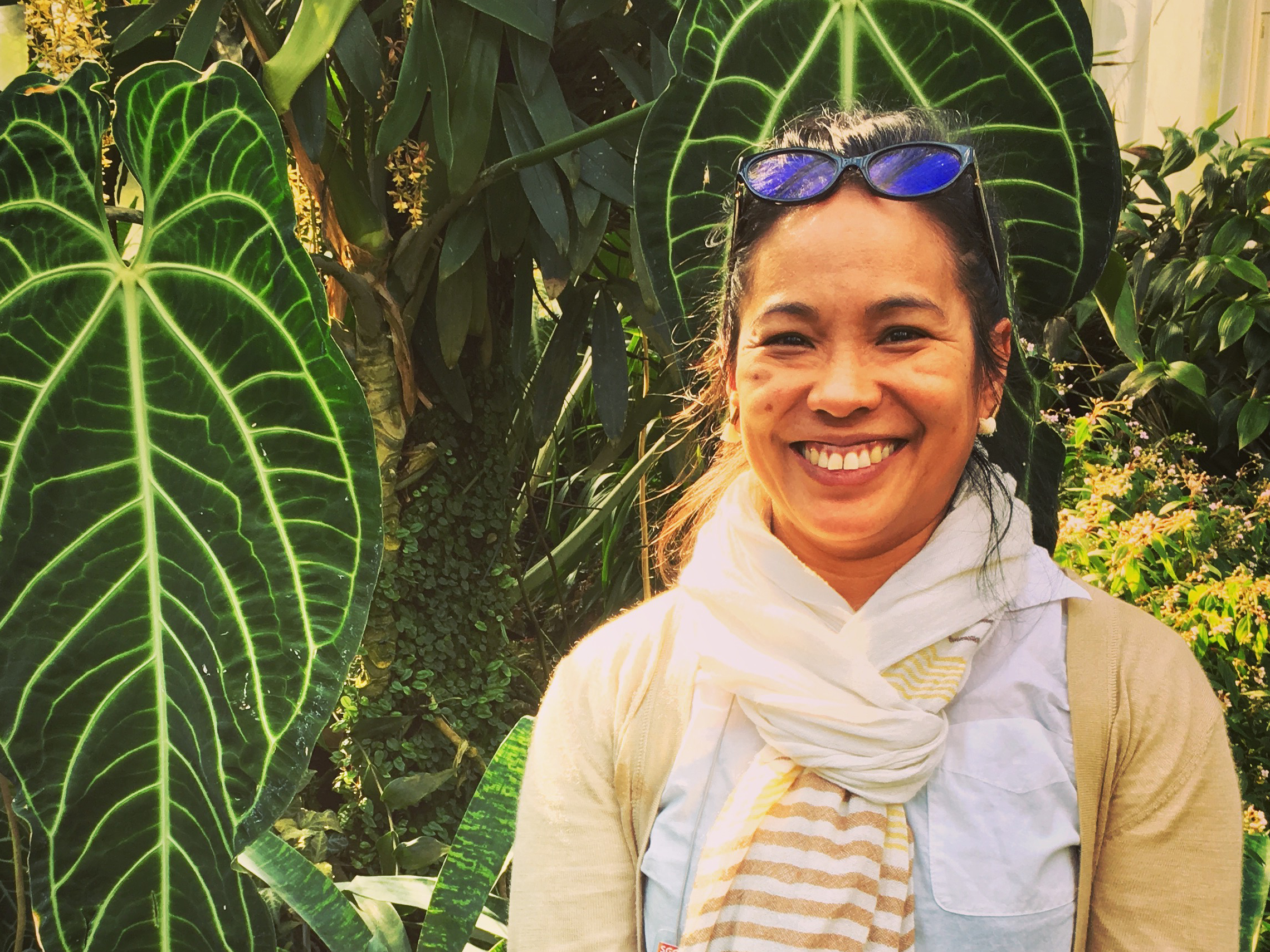 In Japan, Palmarin Pimentel Merges has taken to going for walks around Tokyo,  and creating patterns for her art work from things she sees.  “I take pictures and then pick an element of the picture and create a pattern based on or inspired from the photos,” she says.

Merges was born March 14, 1970, in Honolulu, Hawaii. Many of her early memories consist of her family life being centered around cooking and eating, a taste of home that her parents brought with them when they migrated from the Philippines.

When Merges and her sister were little, their dad took care of them during the day while their mom worked as a beautician. “He was a great dad,” Merges remembers. “He would take us to the beach, the zoo, even to boxing matches and cock fights.”

But everything changed when Merges was five years old. “My dad had a brain aneurysm,” she says. “He was okay, and then suddenly he was on the floor in our living room. My mom didn’t let us see him in the hospital with all the tubes coming out of his body because she felt like it wouldn’t be a good way for us to remember him. And I’m glad she did that, because now I just have these beautiful memories with him before he died.”

In the tight community that surrounded Merges and her family, everybody was considered family. This helped a lot during the next few years after the loss of her dad.

When she was 12 years old, they moved to Redlands, California, to live with her uncle. Merges, made new friends, and did well in high school.

The first in her family to go to college, Merges went to Point Loma Nazarene University in San Diego. Her family expected her to major in nursing, but she discovered a new passion.

“Then I took art,” she says. “One of our teachers introduced us to print making and I thought ‘this is so cool!’ I was hooked.” She changed her major to studio art and got a teaching credential.

After college, Merges spent a year teaching art in junior high and in 1993 was offered an internship with Japanese teachers of English in Yokohama, Japan. As she figured out life there, she found that she thrived on the uncertainties that came with being an expatriate.

“When I came to Japan I felt like an idiot because I couldn’t read or write or decipher any of the language,” she remembers. “But it was exciting to feel that way too. Some people have a problem with feeling like they aren’t understanding what’s happening, but I enjoy some chaos in my life.”

Merges spent three years in Yokohama, and continued to do printmaking in her free time. While there she met her husband, Matt, another expat who was also working there.

In 2005 the couple decided to move to Portland. Merges began teaching art for Marylhurst University, Pacific University and Pacific Northwest College of Art, finding that teaching adults was much more fitting for her.

“As a first generation child of immigrants, my family instilled in me a resourcefulness and resiliency which I use constantly as an artist now,” she says. “I feel that as a pretty good artist and educator, those values are the most important to share.”

It had been 20 years since they had lived in Japan, but when Matt was offered an opportunity to work in Tokyo, Merges did not hesitate. “If we can go back to Japan,” she replied when he mentioned the job possibility, “don’t even ask me, just say yes!”

So in January, 2020, they moved to Tokyo, where Merges teaches art to other expats and spends her free time visiting museums and galleries.

“One of my goals when I came to Japan was to learn about different Japanese handicrafts, like pottery, kintsugi, and aizome,” she explains.

At her weekly ceramics class, Merges is learning Japanese from her fellow students through conversation.

“They’re all making bowls, and I make a bunch of weird little creatures. I think they don’t really know what to do with me,” she laughs. She isn’t intimidated by being seen as strange to other people for being herself and doing what she loves.

“Wherever I go, I am not one to just sit at home and be sad and bored or whatever,” she reflects. “I put myself out there and find out if there is something I can do or if there are people I can meet. If it doesn’t work then it doesn’t work. You never know what is going to happen until you try things.”