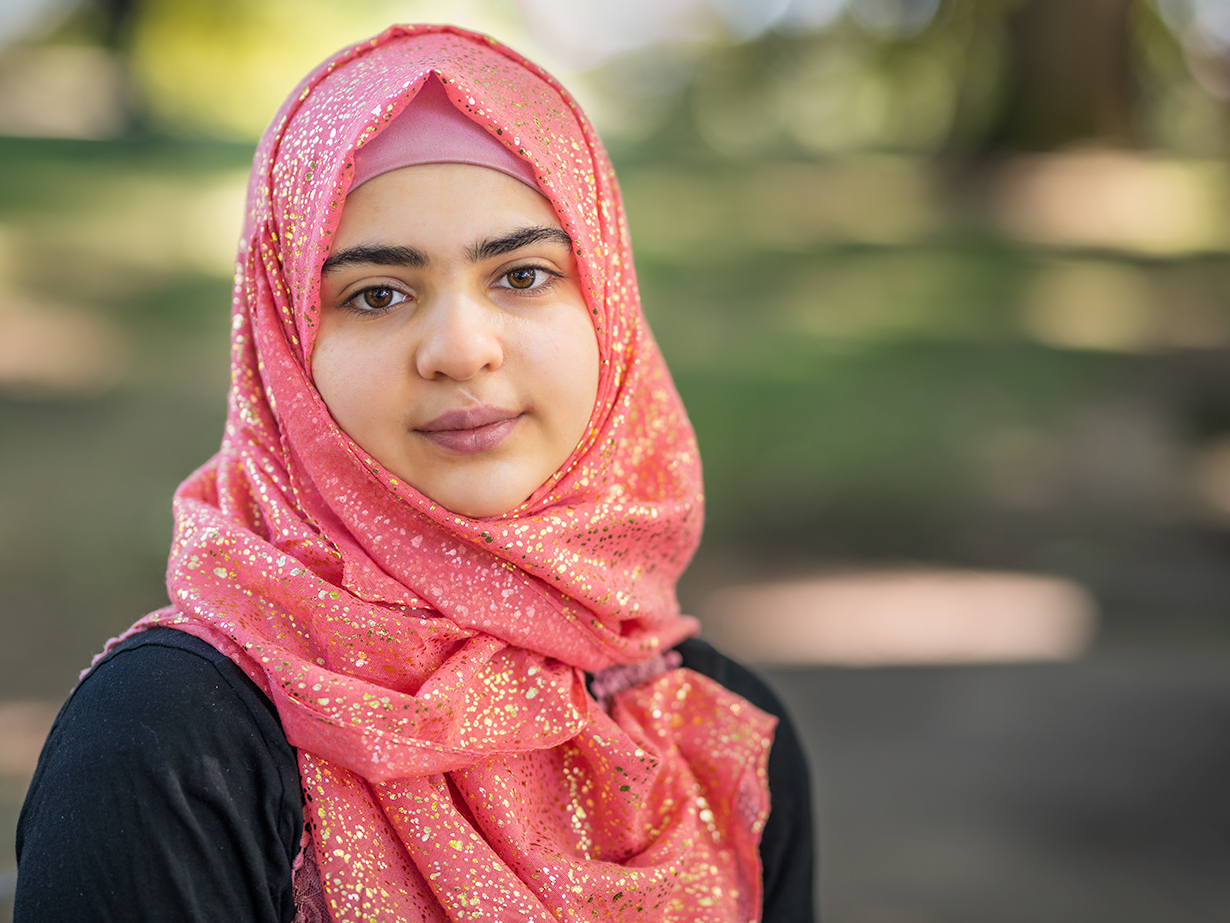 Salsabel Al Masri’s garden was the center of her world. She and her five brothers spent every day after school chasing each other among the olive, orange, apple, berry, grape, and mint trees. These days in Daraa, Syria contributed to what she describes as an idyllic childhood. But when she left her garden and white stone house in 2012, she didn’t know it would be for the last time.

Born in 2003 in Daraa, a Syrian city about 8 miles north of Jordan, Salsabel recalls growing up with fiercely protective and supportive parents. Her voice brightens as she remembers their encouragement as she excelled in math and science courses she still enjoys and that motivate her dream of becoming a doctor.

In 2011, protests against the Assad regime began in Daraa, which eventually led to the Syrian Civil War. In April 2012, the violence hadn’t directly affected her family, but her father feared it soon would, so the family crossed over to Jordan.

“I didn’t think it’d be bad in Jordan — I accepted that there’d be hard challenges — but I was very young and didn’t know what war meant. My family also thought the war would be temporary, about one [more] month,” Salsabel recalled. “But after we left, my house was bombed.”

In the Jordanian city of Irbid, her family rented a house that they tried to make resemble the home they’d left, although there was no garden. Over the course of four years in Jordan, her father struggled to find employment, and Salsabel encountered discrimination in school, she remembered. While some teachers were empathetic when she told them about this experience, they said they ultimately couldn’t do much to change it, she said.

“One girl in particular would always make fun of me in the hallway and the cafeteria. And that bothers me a lot, because we’re all human,” Salsabel said.

In April 2016, the United Nations approved her family’s request for asylum, but her two oldest brothers remained in Jordan and are still unable to visit due to the travel ban.

When they arrived in Portland, Oregon, on May 1, 2016, a family from St. Luke Lutheran Church hosted Salsabel’s family for one month as she took ESL classes and summer courses. She earned all A’s. She’s now a senior at Madison High School, where she still occasionally deals with people making fun of her name and trying to guess her ethnicity.

“I’m always cautious with my words and not letting anyone make fun of me — I learned in Jordan to always be careful and pay attention to everything. If I want to say or do anything, I always listen before [I act]. Because I’m shy and quiet, people expect me  to not ask a lot of questions, so when I do speak up, everyone listens,” Salsabel said.

Most of her school friends are from more diverse backgrounds, she said, though none of them speaks Arabic or wears a headscarf.

“I’m not afraid that I’m wearing a headscarf,” Salsabeli explained. “It’s from my heart. It’s a beautiful piece that keeps me protected, and I really love myself when I wear it.”

Salsabel has also continued to thrive academically as well as socially. She will begin classes at Portland State University in a few weeks to start working on the goal she’s had since childhood:  to study medicine. She will also soon receive her certified nursing assistant certification and care for people as she works through her pre-med track courses. She’s grateful to start college and earn experience in the midst of a pandemic that has rendered so much uncertain, she said.

“I really want to help people — this is my main point in life, and the things that I faced have made me want to achieve my dream even more and help more people,” Salsabel says.

2 thoughts on “Tending a Garden and Her Dreams”