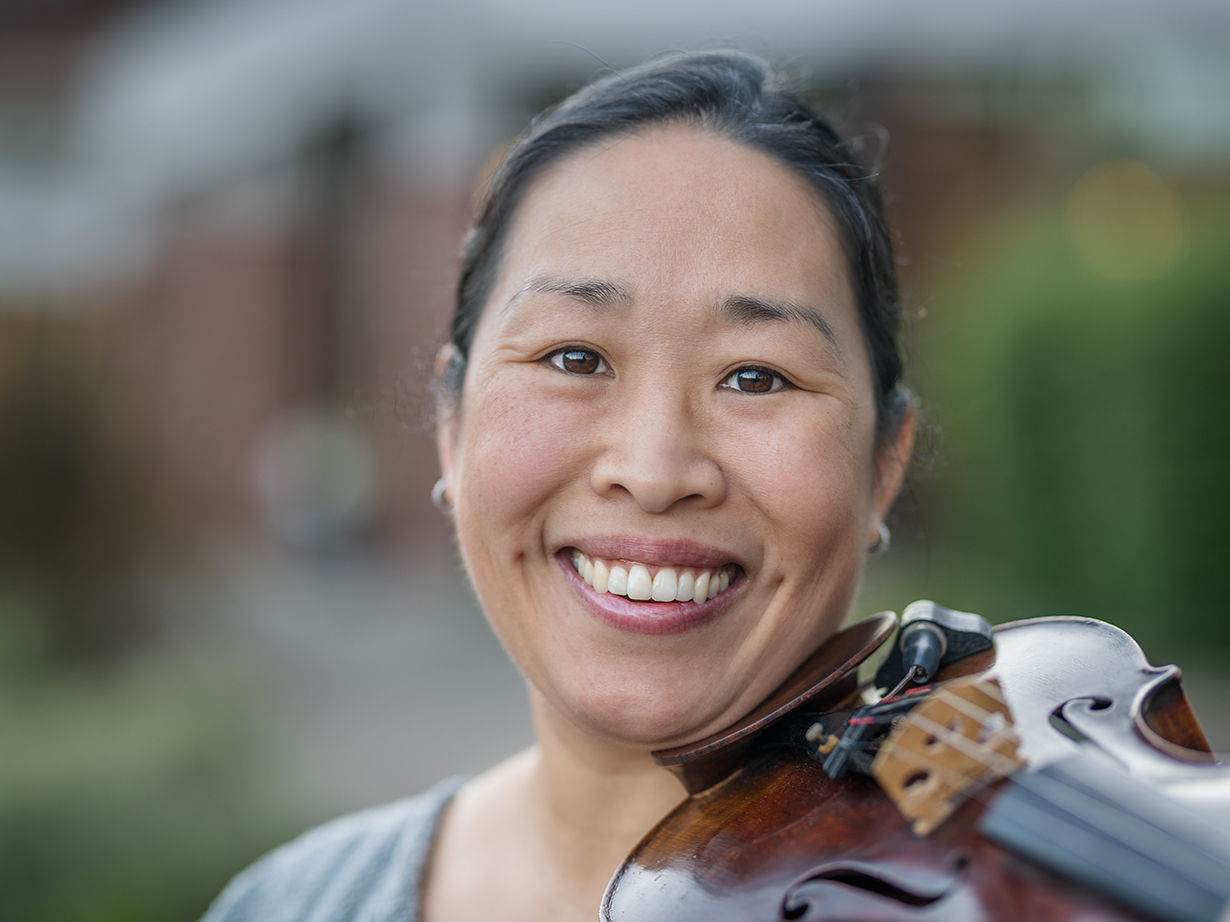 From her childhood, Keiko Araki knew what Taiko drums were. But it wasn’t until she moved to Portland, Oregon, in 2004 and became involved with Portland Taiko that  she recognized the full power of the art.

“During that whole time when the community was trying to win reparations, Taiko was one of those ways to kind of be loud and proud and fight for having your voice be heard,” Araki says.

Araki was born in Kamloops, British Columbia, in 1978 to a father who worked in the forest industry and a stay-at-home mother.

When Araki was 11, her father accepted a new regional position within his forestry company, and the family moved to Vancouver, British Columbia.

“Apparently when I was a child, I asked my mom what my dad did for work and she said ‘Oh, I don’t even know, he counts dots and colors.’ Actually I think he worked on statistics,” Araki says. Growing up, she and her family spent countless hours camping, swimming, fishing, among other outdoor activities.

“My father’s parents met after World War II.” she adds. “My grandmother and my grandfather’s sister had become friends in internment camp and then they were introduced when the family was reunited after war.”

Araki was always a good student, and in  high school she began doing more research on the internment camps and learning about her ancestry. Specifically, she learned that the Canadian government promised Japanese citizens protection over their property while they were in internment camps, including her own grandparents, but then broke those promises.

“My grandmother said that they had some land that they were never able to recover,” she says. “And I don’t know whether they were compensated at all.”

For six years, Araki attended a French immersion program in Canada, and it was then that she first developed a love for playing music.

“When we moved to Kamloops when I was five, I started piano lessons, and my piano teacher’s daughter played violin,” Araki says. “And that’s when I discovered that kids could also play the violin.

“So I did both for a little while, both violin and piano,” she says. “And then it just kind of got to the point where in order to do it, in order to do them both really seriously, I didn’t really have time to just be a kid.”

Araki’s parents encouraged her musical inclinations, to the point where her mom regularly commuted multiple hours a week to take her to rehearsals and auditions.

In high school, Araki began competing in local and provincial competitions for violin performance, both in solos and in chamber groups. After high school, she pursued musical studies at the Vancouver Academy of Music for three years before finishing her studies with a performance diploma at the Peabody Conservatory in Baltimore, Maryland.

She freelanced in Baltimore and then spent one season playing for the Alabama Symphony Orchestra in Birmingham, Alabama,.

But Araki wanted to move to the Pacific Northwest, because it reminded her of her home in Vancouver.

“I always really hoped to someday make my way back to the West Coast, because I never really felt at home on the East Coast,” she says.

In 2004, after auditioning for the Oregon Symphony several times, Araki got a position and she and her partner moved across the country to Portland, where she has lived ever since.

Araki had heard of the art of Taiko, or Japanese drum ensembles, but it wasn’t until she joined Portland Taiko in 2008 that she realized the practice made her feel more empowered and connected to her heritage.

“Our group is more than half women, and you know, none of us are quiet or timid, you know, we’re strong, we have strong voices, we have something to say,” Araki says. “It’s really nice to kind of present a different picture of who we are.”

For Araki, music is more than just picking up an instrument. It’s a way to connect with other human beings and share a passion for art with an audience. As an example, she describes the first concert the symphony played after the contentious election in November 2016. “We played the John Williams score to the movie with Indiana Jones,” she remembers. “I was so glad to be able to look out in the audience at the end of that concert and see the faces and how much they had enjoyed it.

“It was this amazing moment where you felt like you actually made a difference in people’s lives that day,” she says. “They felt moved and really appreciated having this moment to just lose themselves for a little bit and not have to think about whatever was stressing them out. When I feel we have connected with the audience (like that), those are the concerts that mean the most to me.”