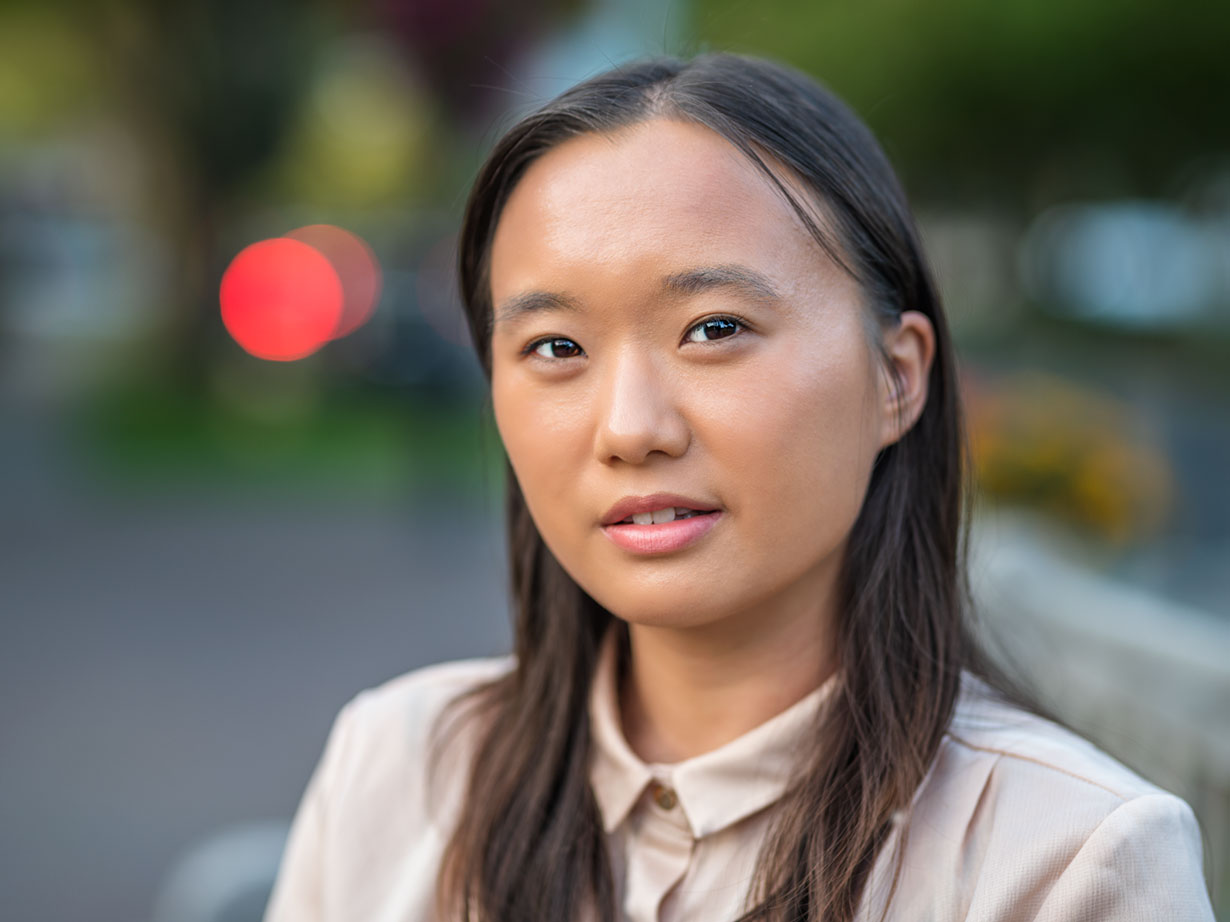 A tiny slip of paper stating the place and date of her birth — Shaoyang, Feb. 24, 1995 — was the only thing identifying Olivia Wolf when she was found as a small baby in the city square of Shaoyang, China.

According to her adoption papers, she was found by the police there and taken to an orphanage for several months until she was adopted by a Jewish American family in New York.

When she was 13, Wolf and her family moved to Portland, Oregon. As a high school junior, she was an exchange student in Japan. “It was kind of the opposite from being in the U.S.,” she reflects, “where I stood out because of the way I look, but I fit in more in terms of mindset and behavior. Whereas there I blended in physically, but not in terms of those other things. So it was the reverse there. I think that it’s impossible for me to really fit in fully in either circumstance.”

“I also went to Israel on Birthright,” Wolf says. “I felt connected to the Birthright participants in terms of background and mindset, although I also felt like I didn’t fully belong because of my race.”

As a child Wolf didn’t have much interest in China. “My adopted family was 100 percent my real family, and I didn’t really give much thought to my birth family,” she says.

Watching a film about another Chinese adoptee who went to China and found her birth family made her decide to investigate further.

Wolf went to Macalester College, and during her time there she took a summer to study Chinese in Shanghai. “I didn’t want my first time going back to be to look for my birth family,” she explains. “So then I felt like I had a taste of China and was a bit more comfortable there.”

After graduating from college in 2017, Wolf spent two weeks in Shaoyang with her father, searching for her birth family. She tried tactics suggested by a Facebook group of Chinese adoptees including handing out flyers, visiting the orphanage and having a local newspaper write an article about her. She met a few possible birth families in person, talking through a translator and even taking hair samples for DNA testing, but did not find a match.

After college she spent a year in Hunan province in China, teaching English. While there, she hired a birth searcher and also participated in a reality TV show focused on searching for people. Neither strategy led to any matches.

Although Wolf appreciates China’s culture and the gracious people that helped her there, she still feels that her heart is American.

“Because I didn’t grow up there, linguistically and culturally it’s just not really who I am,” she says. “I wouldn’t say that I felt a deep connection to China. Another difficult component to deal with when adoptees and birth families reconnect is the significant socioeconomic differences in most cases. I didn’t think having a poor birth family would affect me at all, but I definitely started thinking about it more when I visited the possible birth family that lived in the countryside.”

Although her searches for her birth family have not yet panned out, Wolf has learned a lot through the experiences.

“I grew up quite privileged in most ways in the U.S.,” she reflects. “It also made me realize how ‘success’ is so determined based on the socioeconomic conditions you grew up in, which is mostly just due to luck.

“A lot of adoptees here go on to college, have high-paying jobs, etc, whereas the birth parents of one girl I know were illiterate, didn’t go to college, could barely afford meat, and they thought they were stupid and of low worth because of this. It made me realize how I would be just like that if those were the conditions I was born into.”

“I’m not inherently better or smarter or anything just because I went to college, was able to travel and pursue interesting passions,” she says. “I was largely just lucky.”

Wolf started her grad school this Fall in California to pursue a MFA in creative writing.

Olivia Wolf has been a volunteer writer with The Immigrant Story, finding and writing about adoptees in the U.S. After considerable discussion, TIS decided to add her profile, just before she left for her graduate studies.