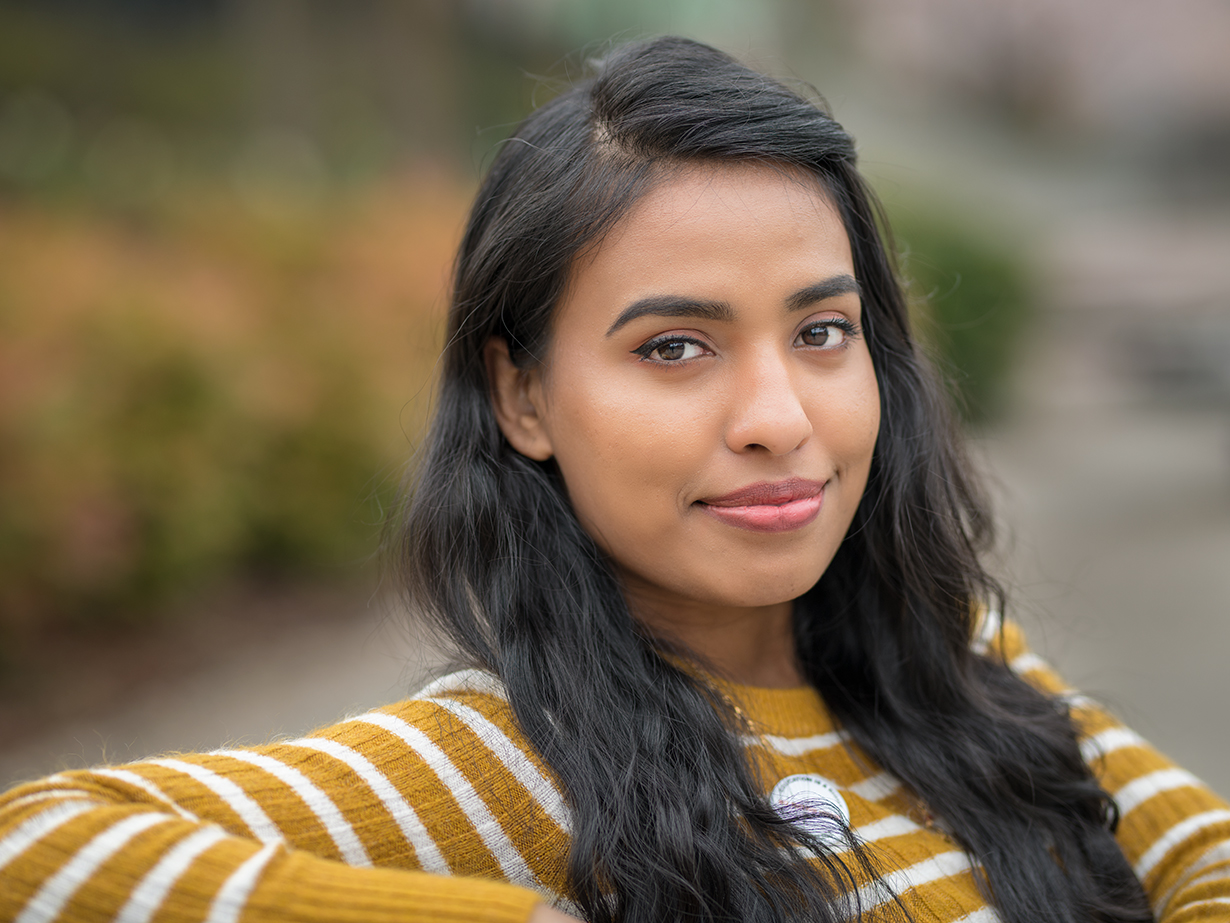 Wearing a crisp business suit and foregoing the traditional Muslim hijab, Hameda Dil Mohamed, 21, spoke last September at a rally in Portland’s Pioneer Square. Sharing her experience as a Rohingya refugee, she hoped, would encourage other women to find their own voices.

“A lot of Rohingya females, they’re afraid to speak,” she explained. “I spoke up that day because I know there were [many] intelligent women in the crowd. I want them to come up and speak as well.” When she speaks of feminism, her brown eyes get serious.

It’s easy to believe she would capture a crowd. It’s hard to catch Hameda for more than a few minutes on Portland State campus before she runs into another acquaintance and erupts into smiles.

She’s unafraid to challenge the status quo. For instance, she acknowledges that her decision not to wear the hijab means that some people see her as “less Rohingya,” and even question her credibility as an advocate for her people. This is unfortunate, because Hameda has a lot to say about a group considered by some experts to be the most persecuted minority on earth. The United Nations has gone so far as to label the actions taken against the Rohingya as ethnic cleansing.

Hameda’s parents left their country for Malaysia as discrimination was increasing in the 1990s. Hameda was born there shortly after. She has never visited the country she prefers to think of as Burma, and is not sure if she ever wants to go there. She still remembers the identification card her father carried that branded him as Rohingya.

School in Malaysia was too expensive, so Hameda spent her days caring for her two younger brothers and practicing writing with a tutor. Her older sister and parents worked to support the family, who lived in a flat in the bustling city of Kuala Lumpur.

Every afternoon, she watched from the window as girls her age in school uniforms walked to their homes. “It made me look down on [myself]. I felt like, ‘oh I am not as good as them. I am not that privileged’,” Hameda recalled.

In 2009, the United Nations relocated her family to Portland. Hameda was 14, and had yet to learn the full extent of persecution that the Rohingya people were facing. As any child would, she missed the familiar comforts of her previous life: coconut sticky rice and her collection of Japanese comic books. She was also painfully aware of the gaping holes in her education.

“I’d never been to school,” she said. “I wasn’t taught to be a critical thinker.”

Maybe not, but her fluency in five languages– Malay, English,Rohingya, Burmese and Hindi– and her ability to hold forth on abstract topics such as gender equality might suggest otherwise.

At David Douglas High School, Hameda took ESL classes and threw herself into Immigrant and Refugee Community Organization’s Upward Bound program. Once again, she felt “less than” but remained determined.

“I felt like I was less intelligent than people not in ESL,” Hameda said. For every two hours her English-speaking friend studied, Hameda knew she’d have to study for five. So she worked hard and pulled good grades.

By her junior year at Portland State, Hameda had forged forward to earn several scholarships, including a Diversity Student scholarship at PSU, where she studied social sciences. In spite of her own success, the crisis in Myanmar is never far from her mind.

“If I’m struggling here, I think about how the children there are struggling, and it makes me want to study more,” she said. Today, Hameda lives with her mother in the same apartment they moved into when they arrived in the United States, but so much has changed since the early days of their arrival.

For instance, Hameda is a college graduate as of this summer. She plans to pursue law or social work. When not busy paving her own way, she does work to help new refugees from Burma and Thailand settle into the city. Last year, she helped lead a workshop on the story of the Rohingya people in Washington.

“I want to be an advocate for my community,” she said, although it seems she may already have achieved that goal.