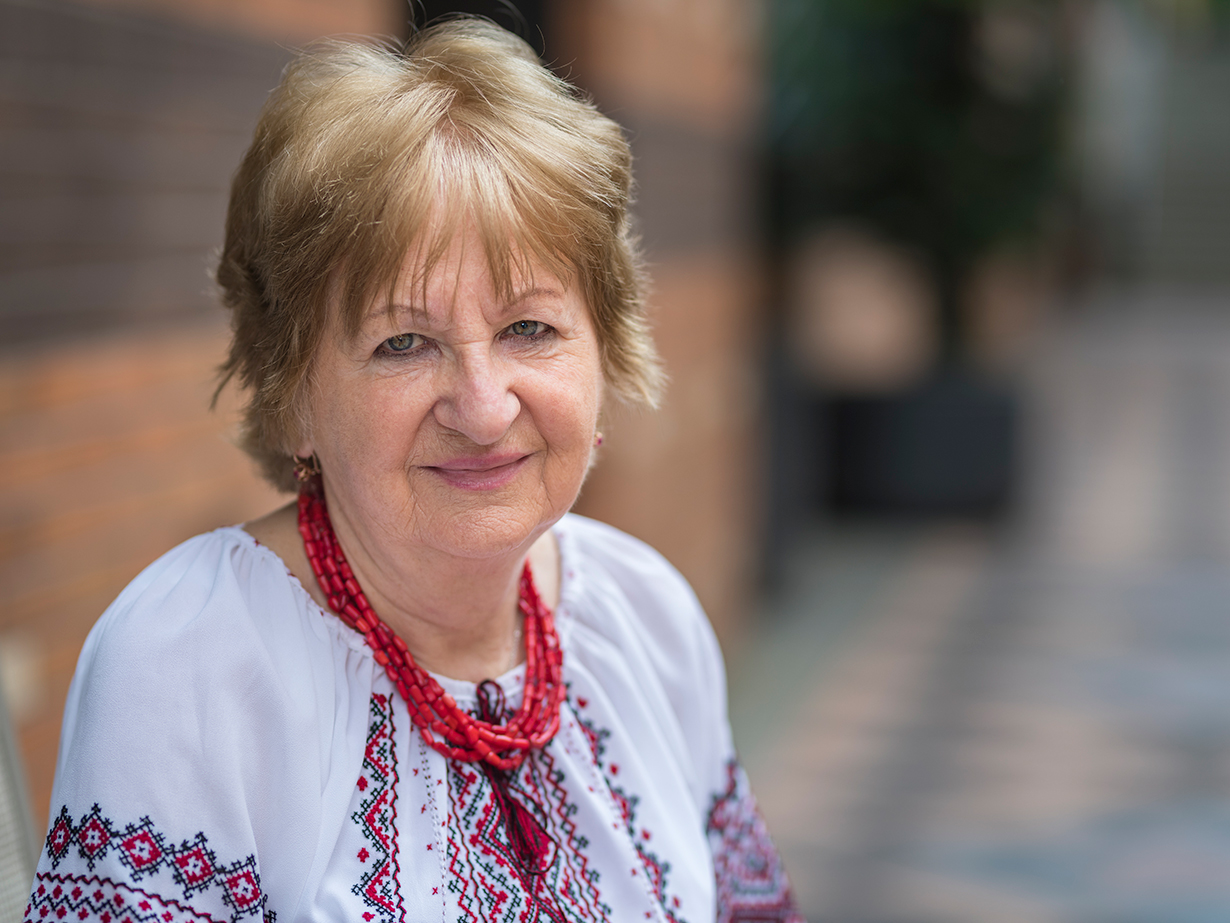 When Michael, age 9, was asked to identify the girl-power women in his life, his first choice was his surrogate grandmother. Vera Moroz, 76, was an immigrant from Ukraine. For the boy who was “adopted” by Vera as one of her own, Vera embodies strength, goodness, intelligence, and kindness.

Vera grew up in Soviet-occupied Ukraine, in the village of Cherkasy, where she was born in 1942. She never met her father and grew up not even knowing his name. To this day, she still doesn’t know; he died in the Second World War. As a member of the Ukrainian army, he had also fought against the Soviets. His political views could have meant that her entire family would be sent to a Gulag camp, she said.

“People who were in the Ukrainian army were getting sent to Sibera or prison,” she said.

Because Vera’s mom wasn’t a member of the Communist Party, she received no pension and had to work low-level jobs to make ends meet. Every morning she rose at dawn to walk into town and fuel the hospital’s wood boiler before the doctors arrived. Before leaving the house each morning, she made bread for her three children and braided Vera’s hair while she slept.

When Vera turned six, her mother convinced the local teacher to let Vera attend school, in part because the bright young girl demanded it. Conditions were dismal. “The school was half-broken, only one big room. We had one long table and there was fourteen children, different ages,” said Vera. The classroom had only one bucket of water for all the students. A shared mug was attached to the water pot by a chain because the school was afraid that the students would steal it.

When Vera was six, the widow next door stole Vera’s family’s goat. The neighbor hoped to get arrested so her children would be in government care and would have access to food and clothing. The neighbor’s plan worked, and her kids went to a government school.

Ukraine at the time was rife with sad stories like this. Vera and her family members were always hungry, she says. To help keep her children fed, Vera’s mother planted a special kind of edible grass, as well as sugar beets.

“They would give us a ticket for one loaf of bread for one week,” Vera recalled. “When I was very young, I went at night and stayed in the long line to get bread.” She wrapped herself in scarves and lay in the dirt to hold her place in line.

After graduating, Vera worked in a shoe store, married, divorced, and became a single working mom. At night, after putting her children to bed, she often knit and sewed clothing to make extra money. She did this in the bathroom because she didn’t want to wake her children.

Vera’s youngest child, Tatiana, left Ukraine to visit an exchange student and ended up staying and attending Yale University. After Tatiana married and had her first child, Levko, Vera moved to Portland to help with her grandchild and became a U.S. citizen.

She has a second biological grandchild, Lukyan.

Vera now studies English, sells home-made food, and babysits to raise money for Ukrainians hurt by conflict, especially children who have lost their fathers. She often cares for Michael, a neighbor who she met when he was a toddler playing with Levko and Lukyan. Vera took a liking to him and started treating him just like a third grandson, buying him birthday presents and inviting him to family gatherings. Vera often reminds Michael, Levko and Lukyan how hard her childhood was and urges them to appreciate all they have. When Michael brings his friends to her apartment, they always say they want a grandma like Vera.

Ally Merkel contributed to this story and, along with Lisa Cohn, conducted the interview session with Vera.