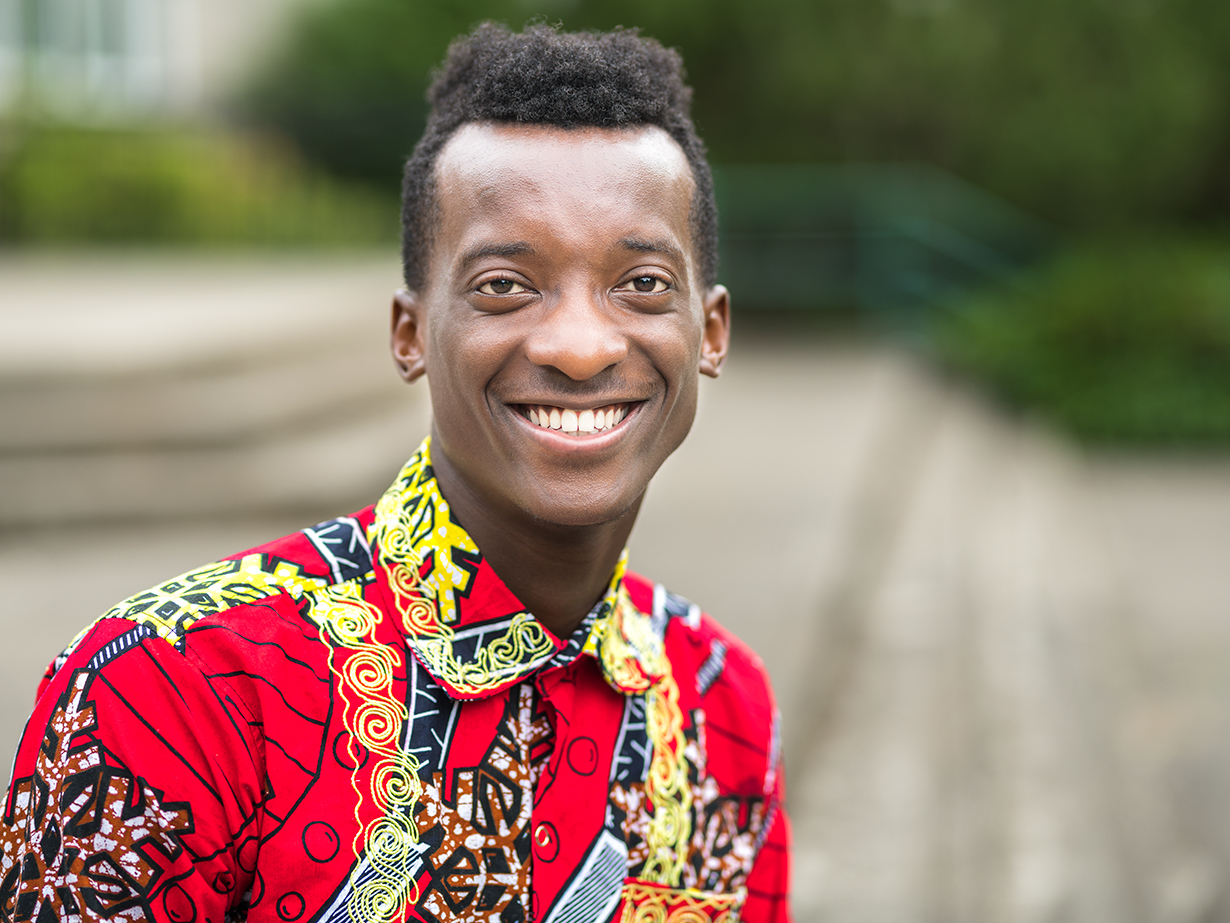 Felix Songolo does not remember much of what he left behind in Africa.  His family left the Democratic Republic of Congo before he was born because there was too much violence and death around them. As refugees, the family tried to make a new home in Lusaka, Zambia, where Felix was born.

His family does not talk about the circumstances of their leaving Congo, but he recalls his parents’ determination to keep going: “My parents are very resilient. They don’t let their circumstances get in the way of what they want to do.  I feel like I’ve picked up on that a lot. They had to have hope and faith that things would get better.”

In 2004, when Felix was four years old, his family came to the United States under the refugee resettlement program. They had hoped to go to Canada, where his mother’s sister was living, but they were sent to Portland, Oregon, instead.

Felix struggled to figure out his identity in this new place. He started his education in a public school, then transferred to a Catholic school in third grade. As one of only a few students of color, Felix found subtle racism creeping into his life.

“I wasn’t proud of being African,” Felix says. “Growing up in a predominantly white space really made you shun away your African-ness, the fact you’re an immigrant. I was straying away from being African and trying very hard to assimilate.”

Felix began pushing back against his family on little things, like not wanting his parents to pick him up from school or not wanting to wear African print clothing. He didn’t want people to know he was so different.

Soccer put Felix at ease, though: “Soccer was the only moment when I felt I could be myself, because there was no need to speak, no reason to do anything but play soccer.”

The turning point in Felix’s life was eighth grade.  Felix had struggled to keep his grades up for years, but this year, he intended to apply to a private high school.  Felix knew he needed good grades. He started working hard at his schoolwork and discovered how good his grades could be.

Before the school year began, his parents had pointed out that his friends were bad influences. After a particularly bad incident with some of his friends, Felix admitted it was true. Summoning up courage, Felix cut himself off from these young people. When school started back, he found better friends to spend time with, ones who drove him toward academic excellence.  His grades went up. For the first time, he felt smart, and he decided he could do anything that anyone else could.

This is when he decided that being different was an asset after all.

In the last semester of eighth grade, someone taped a story on the wall in his middle school about a student who went to De La Salle North High School, the school Felix would attend the following year. The  valedictorian student had received a full scholarship to University of Washington.

“And I said, that’s going to happen to me. I’m going to be like that,” he recalls.

Through hard work, late nights, and the encouragement of his parents and guidance counselor, Felix met his goals. He graduated salutatorian and received a full ride to Georgetown University, where he is presently studying Regional and Comparative Studies. One day, he hopes to be a human rights advocate or a diplomat in Africa. He wants to help break the cycle of what brought his family and many others to the U.S.

“I want people to be able to wake up and have a good school right by them, to have opportunities in their home countries,” he says. “I don’t want them to have to worry about war and death. I want people to have the option to stay.”

One thought on “Something To Be Proud Of”