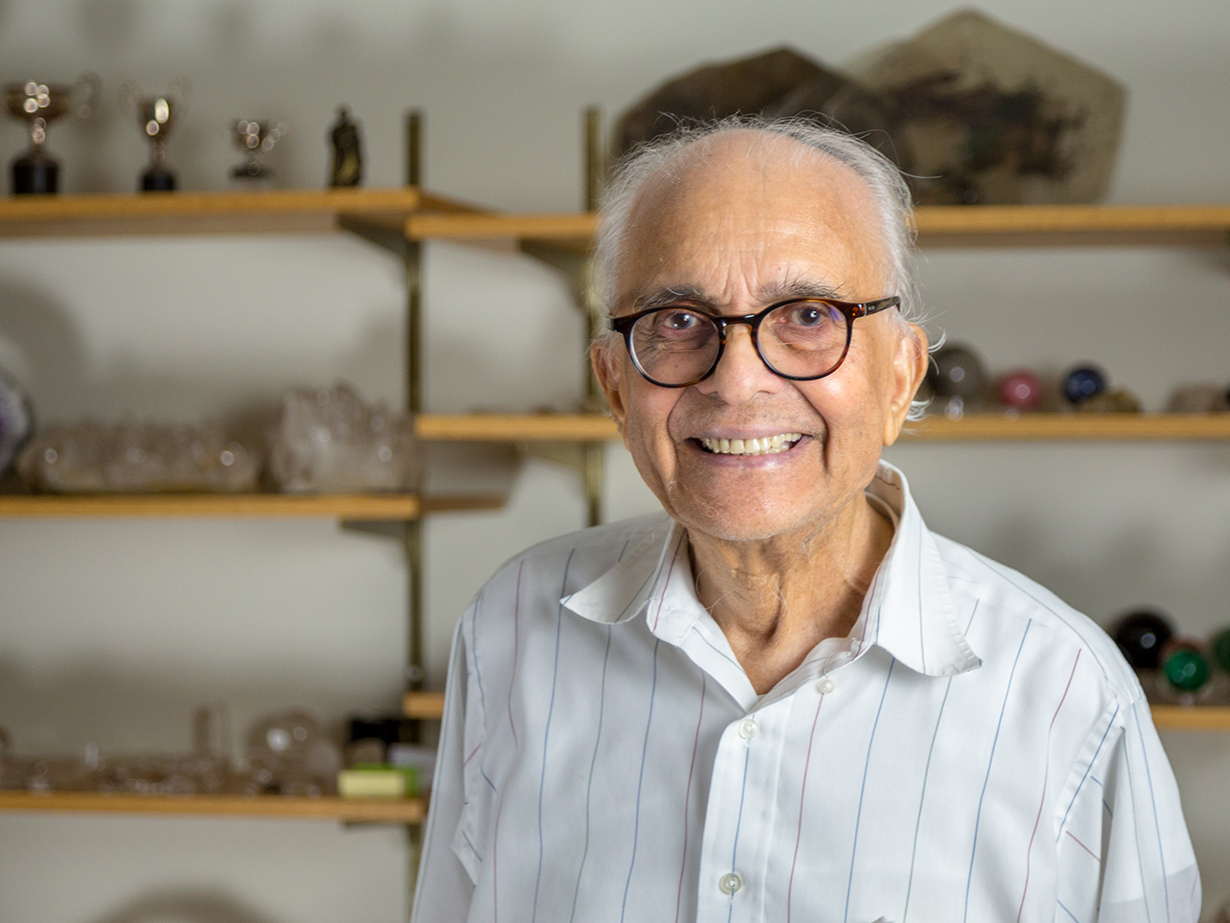 As a school boy in Poona, India, Anant Ramdas dreamed of becoming a professor.

Dr. Ramdas’ father was a physicist, and he encouraged his son to study under his  old  physics professor, Sir C. V. Raman, a Nobel Prize winner.  As a college student, Dr. Ramdas happily enrolled at Raman Research Institute in Bangalore, and graduated in 1956 with a PhD in Physics.

As a young graduate with a new wife, Dr. Ramdas was looking for work, but his desire to be on the cutting edge of the field of physics meant emigration.  His career lay ahead in America, where he and his wife would build a life in Indiana for the next 60 years.

Fresh out of his PhD program, Dr. Ramdas came across an article by chance that directed him to Purdue University, to study with Dr. Hsu Yun Fan, a leader in semiconductor physics.

“I was in Poona where my father was employed in the meteorological department. He was a very high ranking official there, and I used to go there and look at his books. And I saw this article [by Dr. Fan], and I said this’ll be the place for me to go, if he will accept me,” he says.

After corresponding with Dr. Fan over the next few months, Dr. Ramdas accepted a position in 1956 as a Research Associate at Purdue. So began the adventure of coming to the United States.

Dr. Ramdas received a scientist visa from the American Consulate General Office in Bombay. Then he and his wife, Vasanti, flew by propeller plane from Bombay to London. The trip took a couple days because the plane had to make frequent stops.

In London, they visited Dr. Ramdas’ sister, and her husband arranged passage for them on a ship sailing from Southampton to New York City.

Almost as soon as the ship started to move, Dr. Ramdas was seasick and remained so for much of the 14-day trip.

The ship was crowded, so Dr. and Mrs. Ramdas had to bunk in separate cabins. Mrs. Ramdas would come to visit her husband, to talk, read, and keep watch.

“She would look through the porthole and say ‘another wave is coming!’ After that, I decided I would not go on a sea trip again,” he says.

At New York, they caught a train to Indianapolis, then changed trains for Lafayette, Indiana.

Upon disembarking, they did not know where to stay the night. People at the station suggested the Purdue Memorial Union, which allowed boarding, and the couple caught a taxi there.

When they went into the dining room for their first meal, they were delighted to find they were not the only Indians. There were about 35 Indians at Purdue, including students. These new friends, along with others, helped them make the transition to living in West Lafayette.

Cooking was immediately challenging, both due to Mrs. Ramdas just learning to cook and to the lack of Indian cooking supplies.

“At that time, there was no grocery store that sold Indian products, but we would ship it from New York on mail order,” she says.  It would take until the 1980s before Indian products could be bought in Lafayette.

Nevertheless, the couple was pleased with their decision to move to the United States.

“We have been very happy, as happy as we would have been back in India,” he says.

A major contribution to their contentment was Purdue University itself. The school was welcoming and already diverse when they arrived, with professors from China, Australia, Germany, Holland, and Switzerland.

Within a few years, Dr. Ramdas had received full professorship, becoming the first Indian professor in the school’s history.  By then, Mrs. Ramdas had completed her Bachelor’s at Purdue. They also bought a house, which gave them a solid sense of belonging.

Dr. Ramdas retired as the Lark-Horovitz Distinguished Professor of Physics  in 2016.

Looking back, Dr. Ramdas would not change anything about his life in West Lafayette.

“The ability to teach students and introduce them to new research, and produce theses, and get PhDs, and then they become professors – belonging to that community is my great joy,” he says.

Special thanks to Vasanti Ramdas for making this interview possible, and as Dr. Ramdas says often, her constant love and support are integral to his success. Becky Spears, Purdue University, contributed to this story and conducted the interview session with Dr. Ramdas.