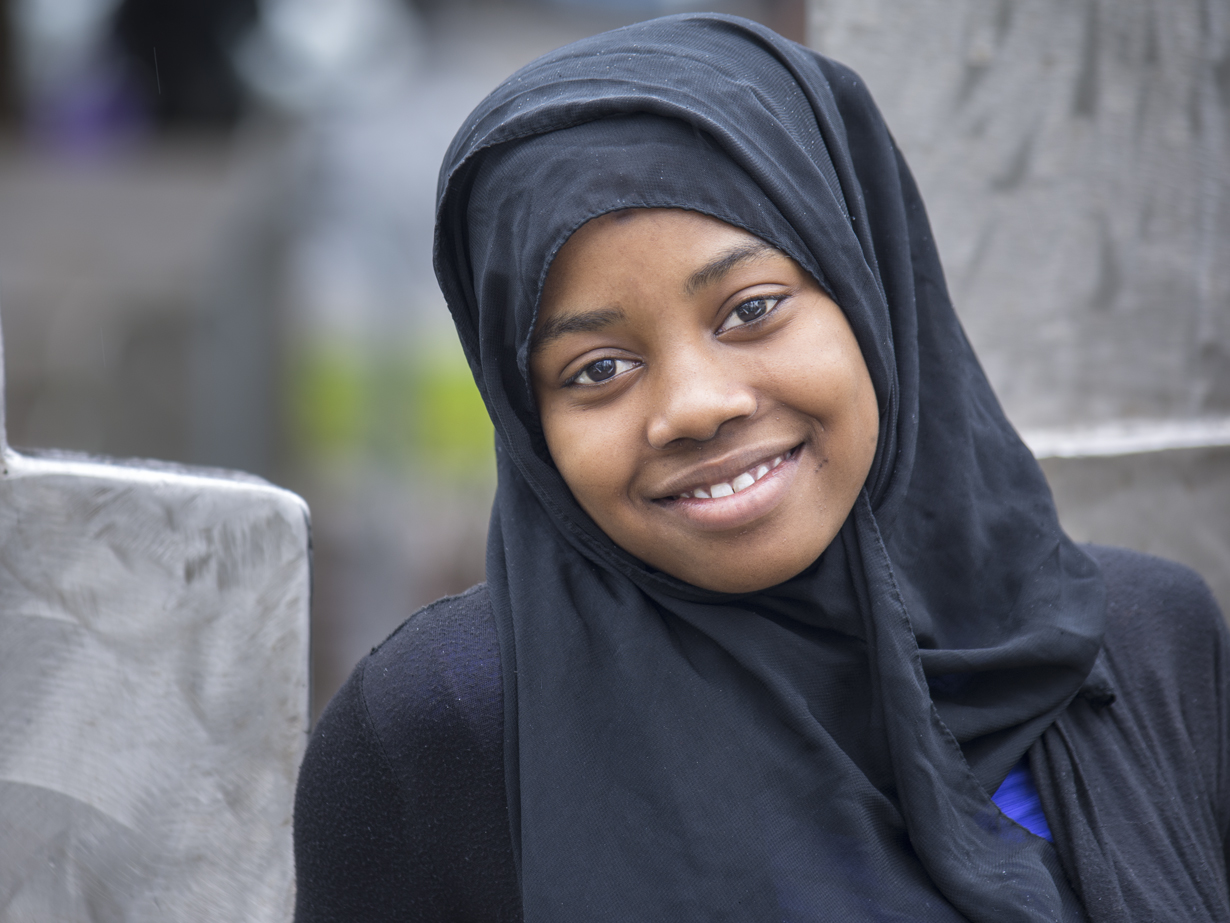 The oldest child of Somali parents, Fowzia was born in Kenya and spent her early years there in east Africa. At the age of three, her family left the poverty and struggles of Kenya for the United States, finding themselves relocated to Boise, Idaho. Isolated by culture and language, there were very few immigrant resources available to assist her family with their transition and resettlement. As the only Somalis in the area, her family stood out. In response to this isolation, Fowzia’s parents were protective, uncomfortable with her leaving their house or interacting with neighbors. In time, a Somali translator helped the family get established and other Somalis joined the Boise community.

While there was a greater sense of security with a growing Somali community, the lingering feeling of being outsiders tempered her family’s interactions with the world beyond her home. As Fowzia progressed through school, she discovered an independent self emerging. Deeply appreciative of the courageous sacrifices made by her parents, she simultaneously found herself viewing the world through a different lens. While understanding the struggles her parents endured in Africa and the reasons they responded as they did to the transition to America, she understood that her story and her path were different from that of her parents. In school, Fowzia began sharing her story and listening intently to the the stories of her classmates as they discussed their immigrant experiences. For her, the process opened doors. At the age of ten, she came to the realization that “fear takes away opportunity.”

As Fowzia distanced herself from the fears that surrounded her early years in America, she developed an open mindedness along with an inner strength that proved valuable in the face of discrimination. Bullied for her skin color, her head scarf, and her religion, Fowzia became aware of ways in which she was vulnerable. She faced those moments by drawing on her inner fortitude to stand up for herself. Her open mindedness allowed her to understand that what one individual did, did not reflect on everyone.

Moving to Portland, Oregon two years ago, Fowzia’s evolution continued. As she started high school, she began defining and refining her purpose in life. Buoyed by a Somali proverb her grandmother often shared, “to want to live life knowing that her left hand doesn’t know what her right hand paid, and her right hand doesn’t know what her left hand paid,” Fowzia has been inspired to give as much as she can to as many as she can to the point that one hand doesn’t know what the other is contributing. She is determined to leave a legacy through her efforts to feed the hungry, help the poor, and use the wisdom of her experience to enhance the lives of others.

As a sophomore in high school, Fowzia has surpassed her parents in educational achievement. Her dreams for the future are driven by her desire to be a role model to her younger siblings. Currently, she serves as a community youth ambassador through the Parks and Recreation Program and is involved in a handful of clubs that reach out to others. Her ambitious career plans include attending Harvard, becoming a social worker, legislator, lawyer, and judge. With a magnanimous energy and an indelible spirit, Fowzia is on course to bring her dreams to fruition and leave an inspiring legacy.