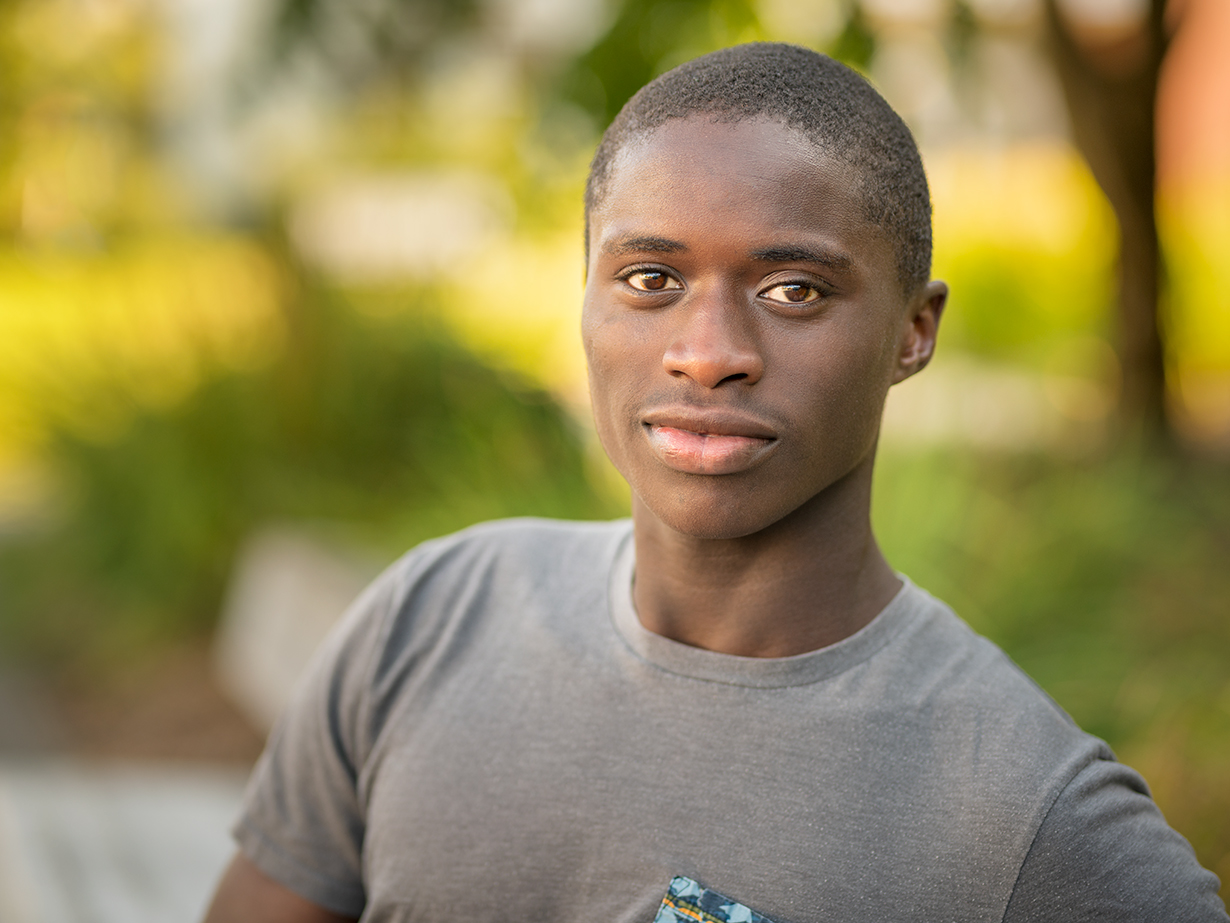 Mussa doesn’t remember much from the night his father was killed. From where he stood in his crib he could hear men’s voices in the room next door, commotion, and a gunshot. His father died while resisting a robbery at their home in rural Congo, leaving Mussa’s mother a single parent to six children.

Soon after in 2005, rebel activity escalated, and the family traveled by foot and boat to Burundi where relatives of his mother lived. Mussa was five years old, and the adjustment was difficult.

“I remember on the boat a lot of people started puking. We rented a one-bedroom house and we split the living room in half and that was another room,” he said.

For four years His mother sold bread on the streets, and the children commuted 45 minutes by foot to a school filled with strict teachers. Mussa’s mother told her children to put their education first, and he was obedient.

His mother applied for refugee status and in March of 2009, the family began their second exodus, this time leaving Africa altogether as they headed for a strange and distant place called Oregon.

On the plane, Mussa tried pizza for the first time. He didn’t like it. On the playground in Portland he kicked a soccer ball for the first time; it was nothing like the wads of plastic bags and string he had played with back home. Everything was new, and there was much the 9-year-old didn’t understand, but when he got to math class his first week, everything began to feel a little more familiar.

“I showed up to math class and I was really happy because math is an international language and everybody knows it,” said Mussa. He was placed in 3rd grade at Lents Elementary School and spoke no English. Quickly, however, he discovered that both math, and his love for soccer, didn’t require a spoken language.

“I went out to recess and I was playing kickball and this kid saw me, and he asked me if I wanted to play soccer. He pointed at the soccer ball; he grabbed me and then ran towards it. I really didn’t know how to communicate, but he was my friend and every recess we played soccer,” recalled Mussa about meeting his first close friend, Alfred.

From then on, math and soccer became Mussa’s tools for relating to a world that he had yet to learn the words for. Two skills he would eventually excel at.

In 2013 his mother succumbed to liver cancer. The-13-year-old and his siblings were left orphaned in a foreign country, numb with grief. Amid the turmoil, the suddenly fractured family banded together to support each other through life and school, in honor of their mother’s legacy.

“We’ve done a good job of staying together as a family and communicating. My older brother took control of the family and had all of us thinking about school,” said Mussa.

In the years following his mother’s death, Mussa pushed himself academically and physically by taking Honors and AP math classes and diligently practicing soccer. When he tried out for the Portland Timber’s Academy as a sophomore, he competed against 200 others for a spot on their team. Despite daunting odds, he was not afraid.

“I already knew I was going to make it. I was really confident in myself just like I was confident about making my high school team my freshman year.” In the end, Mussa was one of six athletes selected for the team.

His work ethic manifests itself in quiet confidence. As he prepares to begin his senior year of high school, Mussa hopes the future will include a Division 1 school where he can study computer science and continue to play soccer, possibly even professionally. Above all though, he honors his mother’s legacy in a dedicated pursuit of education.

“Don’t just stay in school, but stay in school and get good grades: always push yourself,” he advised, “I can hear my mom’s voice in the back of my head always saying it, that’s what keeps me going.”