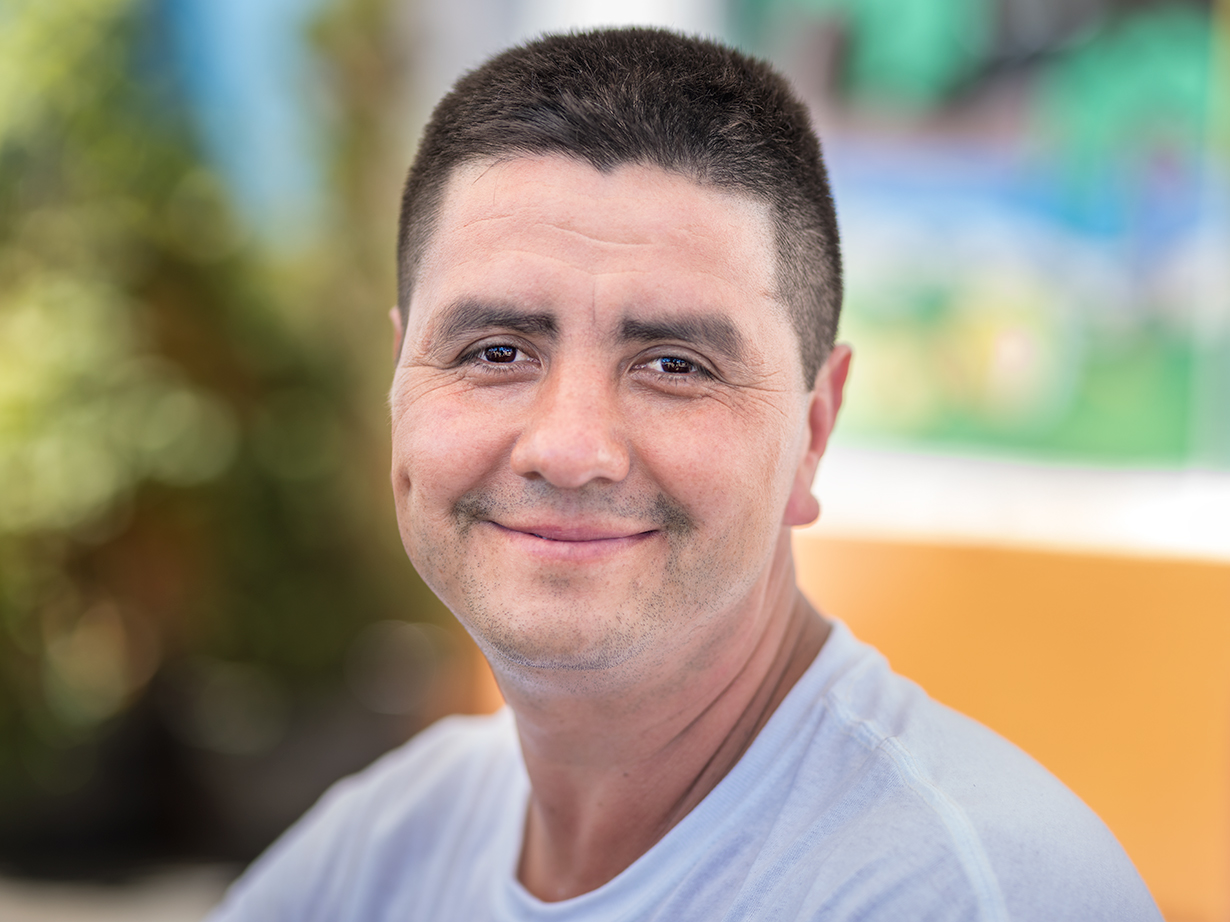 Selling matches and chewing gum on the rough streets of Mexico City, Jaime Miranda learned early on what it took to survive. “I guess at the age of 9 or 10 you become an adult,” he reflected. Today, Jaime lives in Hillsboro, Oregon, where he guides aspiring merchants who seek to set up small businesses.

Jaime, 42, was born in La Sierra Tarahumara, a rural part of Chihuahua, Mexico. Born into hardship and poverty, his family moved to Mexico City when he was just a year old in search of a better life.

His mother eked out a meager living cleaning houses and sometimes working as a house painter, but when there was no work, she would take Jaime along to sell quesadillas and anything else she could think of on street corners. Jaime went to work at an early age, picking vegetables in fields, and earning very little. He missed school often because of work, which caused Jaime to be held back several times.

The hardships made a powerful impression on Jaime. He remembers a childhood of food scarcity and an awareness of the extremes of wealth and poverty around him.

When Jaime was 8 years old, his father headed to the United States in search of better opportunities. He later came back to pick everyone up except for Jaime because he could not afford to pay the coyote, a human smuggler, enough to help all of them cross the border into the United States.

Jaime was left behind to live with his mother’s relatives on a farm in Chihuahua. “It turned out to be the best year I had as a youth,” he said. “I felt that they cared for me [and] for the first time, I wasn’t hungry.”

Another year passed before Jaime’s father came back for him. Jaime knew that many people drowned crossing the Rio Colorado at the border, so he had learned to swim and had prepared himself mentally for the journey.

As it turned out, the water reached up only to his ankles. “It was disappointing,” he said. “I thought it was gonna be more exciting.”

After crossing the border, “we were stuffed in a car like sardines,” Jaime recalled. For two days, they were kept “in a dark house with a group of people” as they waited for a car to take them to their destination.

They chose Oregon because his father had heard from a friend living in Hillsboro that there were ample work opportunities.

Living in Hillsboro, Jaime quickly picked up English and became the first member of his family to graduate from high school. He won admission to Oregon State University, and studied education while also working part-time at an elementary school. Around that time, Jaime’s parents opened stands at flea markets in Portland and Beaverton.

Working alongside his parents, Jaime realized he could use his education to teach other new immigrants who wanted to own businesses how to negotiate the hurdles of owning a small enterprise. So Jaime opened a swap meet with the goal of giving entrepreneurs a space where they could give their business a go.

Jaime opened M&M Marketplace in an empty warehouse in Hillsboro in 2000 to give small family-operated businesses a chance to thrive. Today it is a thriving community hub teeming with more than 80 vendors that comes alive every weekend. It takes on a festive mode with mariachi bands, food stalls and clowns entertaining children

Jaime, now a US Citizen,  helps connect these families with organizations that hold seminars for business owners and entrepreneurs. He also invites guest speakers to cover topics such as insurance, credit cards and safety.

Knowing how much he has benefitted from an education, Jaime is passionate about the importance of using M&M Marketplace to educate fledgling business owners. He said his own experience proves his theory that “education creates opportunities for a community, and allows you to understand how to plan your future.”

2 thoughts on “Building a Thriving Community”