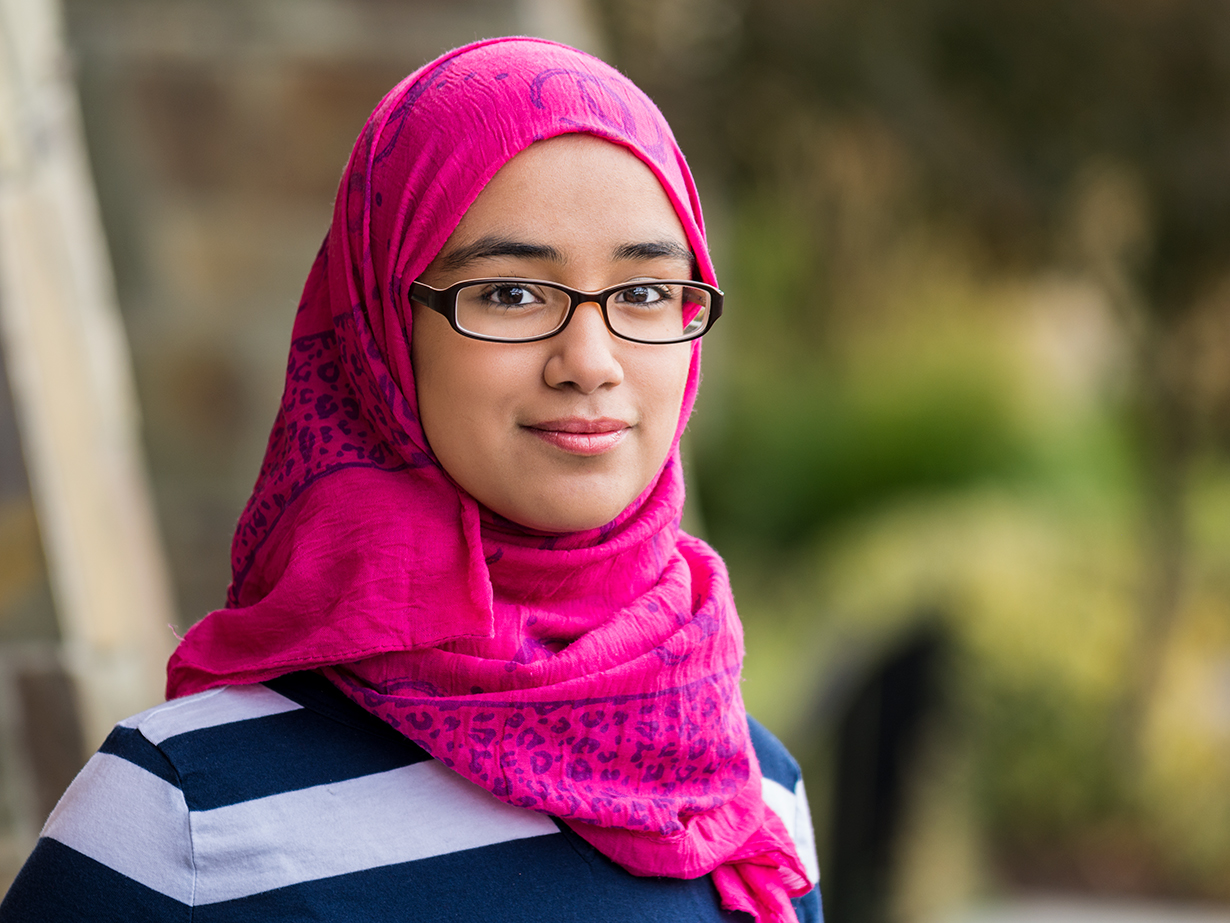 For Hanin, wearing a hijab and being a feminist go hand-in-hand.

The 18-year-old Forest Grove college student, born in Saudi Arabia, has lived in the United States   since she was a 5-month-old baby. In 1999, after her father earned a scholarship to study in the U.S., her parents brought their young family stateside from their home in Jeddah, Saudi Arabia. They lived in Pennsylvania, then Texas, finally moving to Oregon in 2002.

It didn’t take long for the family dynamic to change dramatically once they moved to Oregon. Hanin’s parents divorced in 2003 and her father moved back to Saudi Arabia.

Her mother, Fatima, stayed in Oregon and raised Hanin and her younger brother, Salman, on her own. In addition, Fatima — who had earned her Bachelor’s Degree when she lived in Saudi Arabia — pressed ahead with ambitious goals for her own education. She started work on her Master’s Degree, then her Ph.D., becoming a strong female role model to her young daughter.

“She did it!” says Hanin of her mother’s success. “She’s amazing, and I’m so proud of her.”

Growing up around her mother’s strength and perseverance helped Hanin realize her own potential. She started school at the Oregon Islamic Academy and then attended the International School of Beaverton. Hanin says the two schools are very different from one another, with the Oregon Islamic Academy being so small with familiar faces and the latter much larger in size, with people she didn’t recognize. Hanin enjoyed experiencing them both — and the wide array of perspectives each offered.

Hanin is currently a freshman at Pacific University in Forest Grove, studying Journalism. She wants to represent minorities in the media.

Describing herself as a feminist, Hanin says wearing a hijab is her “personal act of protest.” The hijab, also known as a headscarf or veil, is worn by men and women for a variety of reasons. Some wear a hijab because of their faith or for modesty, while others find an essential part of their identity in wearing one. For Hanin, it’s all a matter of choice.

“I can wear what I want and be who I am without having to conform to the standards of beauty.”

Hanin says she is faced with many stereotypes claiming she is “oppressed, or quiet, or submissive or weak. I have to constantly fight against those and prove myself.”

To Hanin, the hijab is a source of empowerment and liberation. She understands that many women are afraid to wear their hijab in the U.S., but she likes standing out. She says it pushes her to speak up.

In May 2017, hate speech led to murder on a MAX light-rail train in Northeast Portland. Two men were killed and another was wounded after defending two women — one of them wearing a hijab — from an agitated, knife-wielding rider violently shouting at the women. Hanin was shocked that something so hateful could happen so close to home.

“It was terrifying,” she recalled.

The event didn’t change the way Hanin lives her life, but furthered her determination to be who she is. She credits her mother for this trait. Hanin says she’s a “big believer that no matter how much hate or tragedy or adversity happens, there’s always something good that comes out of it.” Hanin is proud of her generation and the way they are approaching adversity.

“We’re standing up for each other, we’re learning about each other.”

Hanin is excited for her future, and the future of this country. She envisions a world where everyone is proud to be who they are, with no fear or contempt. Hanin’s fortitude illuminates her identity; she is fierce, she is inspired, she is hopeful.

Her advice to those who feel misrepresented:

“Stay true to yourself. It doesn’t matter what anyone thinks of you or says to you. Believe in yourself, whatever you do.”