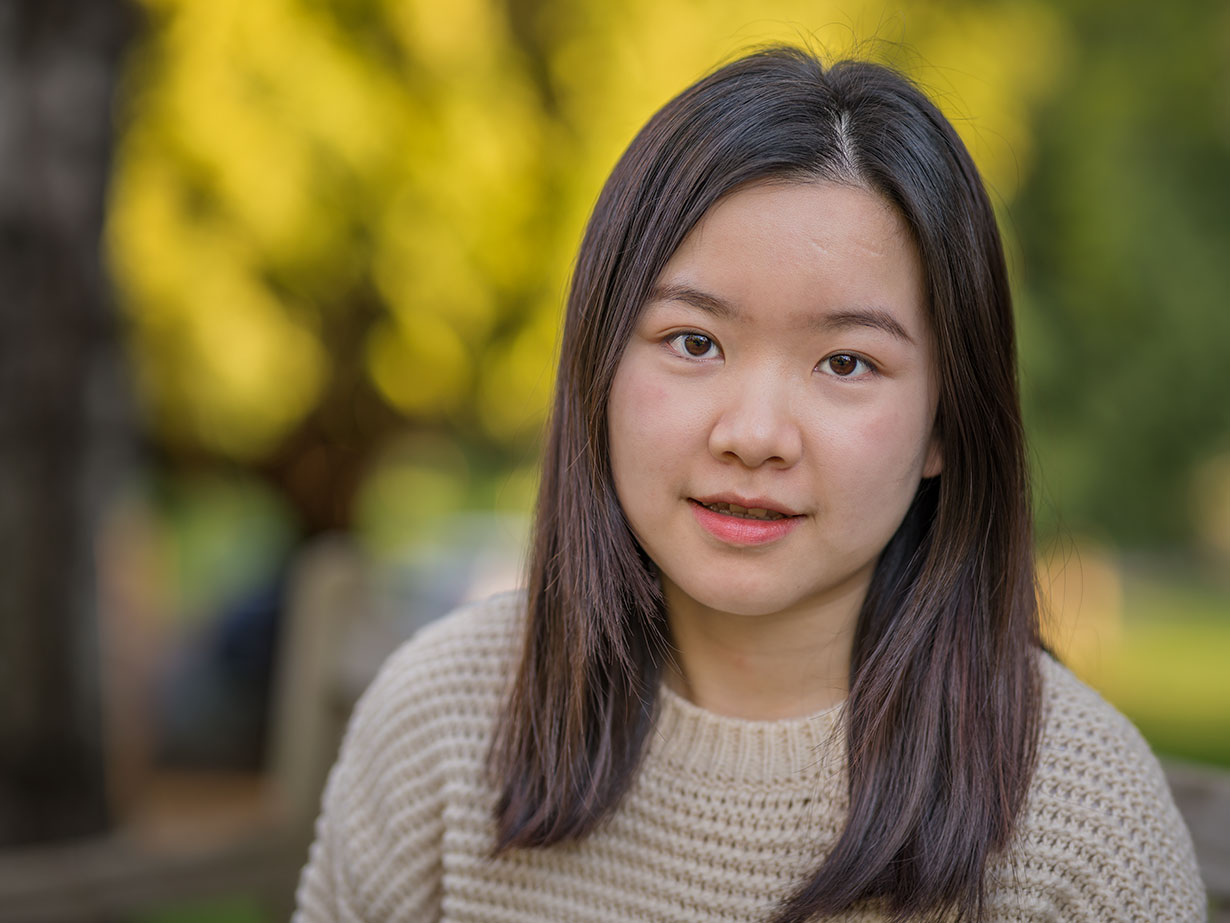 “The moment I stepped into the Chinese classroom, I knew it felt different,” Aria Chen says, remembering her first day at Franklin High School. “The teacherunderstood that I was still an English learner and she would explain how the school worked.”

Chen was born in Guangdong, China, in 2001. As an only child with working parents, Chen spent most of her time with her grandparents or friends. “I was very outgoing and optimistic with lots of friends,” she says. “My mom always said I was the head of the pack.”

Curious and creative, Chen displayed a fondness for reading, writing, and storytelling. “I was curious. I asked a lot of questions when I was little,” Chen says. “My favorite subject was language arts. I tried to write my own novel in fourth grade.”

In particular, Chen remembers loving her grandmother’s stories. “There was one about a thief stealing their television. I asked her to retell the story every day.”

The family came to the U.S in 2013 when Aria was in sixth grade. After only a few months in Portland, the Chen family moved to Hermiston, Oregon. Chen spent most of her eighth and ninth grade by herself. Her parents worked long hours at Chinese restaurants, and “I was always home alone.”

To make matters even more difficult, “I was the only Chinese student in a majority white town and my English wasn’t very good back then. I didn’t have many friends…Most students in the ESL class were Spanish speakers, so I couldn’t communicate with them, either.”

While she struggled to communicate with fellow students, math class was a different story. “I did well in math because math is just numbers. It doesn’t require any English knowledge,” she explains.

But despite her academic success, Chen felt lonely, isolated and homesick for China. “I found myself becoming more quiet,” she says, “I hesitated to even start a conversation. Sometimes I would  imagine what my life would be like if I were still in China.”

When her parents decided to move back to Portland for Chen’s sophomore year of high school, she was happy because she could be near her cousins.

At Franklin High School, a counselor suggested that studying  Chinese might help with Chen’s  English. “That’s when I met my Chinese teacher, Mo Wang,” she says. “And she was my inspiration to get involved in school.”

For the first time since she arrived in the U.S, Chen began to reconnect with the creative, social interests she had as a child in China. “I still loved math classes but at the same time I started to explore my hobbies, my other interests,” she says. Chen was invited to join the Red Cross club, Key club and Chinese club. Eventually, she  became president of the Chinese club.

“I still cared a lot about education and my grades because I felt like my communication and interpersonal relationships could be bad. But at least I will have this one aspect of my life that I do well in,” she says.

She enrolled in computer coding classes and has continued to take computer science classes at the University of Oregon, where she is a sophomore. “I’m interested in how what we see on screen is created,” she explains.

Chen’s college major is business. She loves learning about how business operates, but misses the kind of reading and writing she did back in China, where there was no language barrier.

“In China, my favorite subject was language but here it became math classes,” she says. “I always think that if I had stayed in China, I would have become a writer.” Recently, she began journaling again.

“I am half-Chinese, half-American,” she says. “I appreciate Chinese traditions and the belief in perseverance. That made it so I could become the person I am today. But I’m also glad I’m here because America gave me a lot of opportunities I wouldn’t have if I were in China.”

Although Chen struggled with feeling outcast, she now appreciates the support and encouragement she received from  her school community.

“My sophomore English teacher helped me to understand the uniqueness of being multicultural,” Chen wrote in her college admissions essay. “I am not in China anymore. I can’t live in the past. I have to start my new life.”