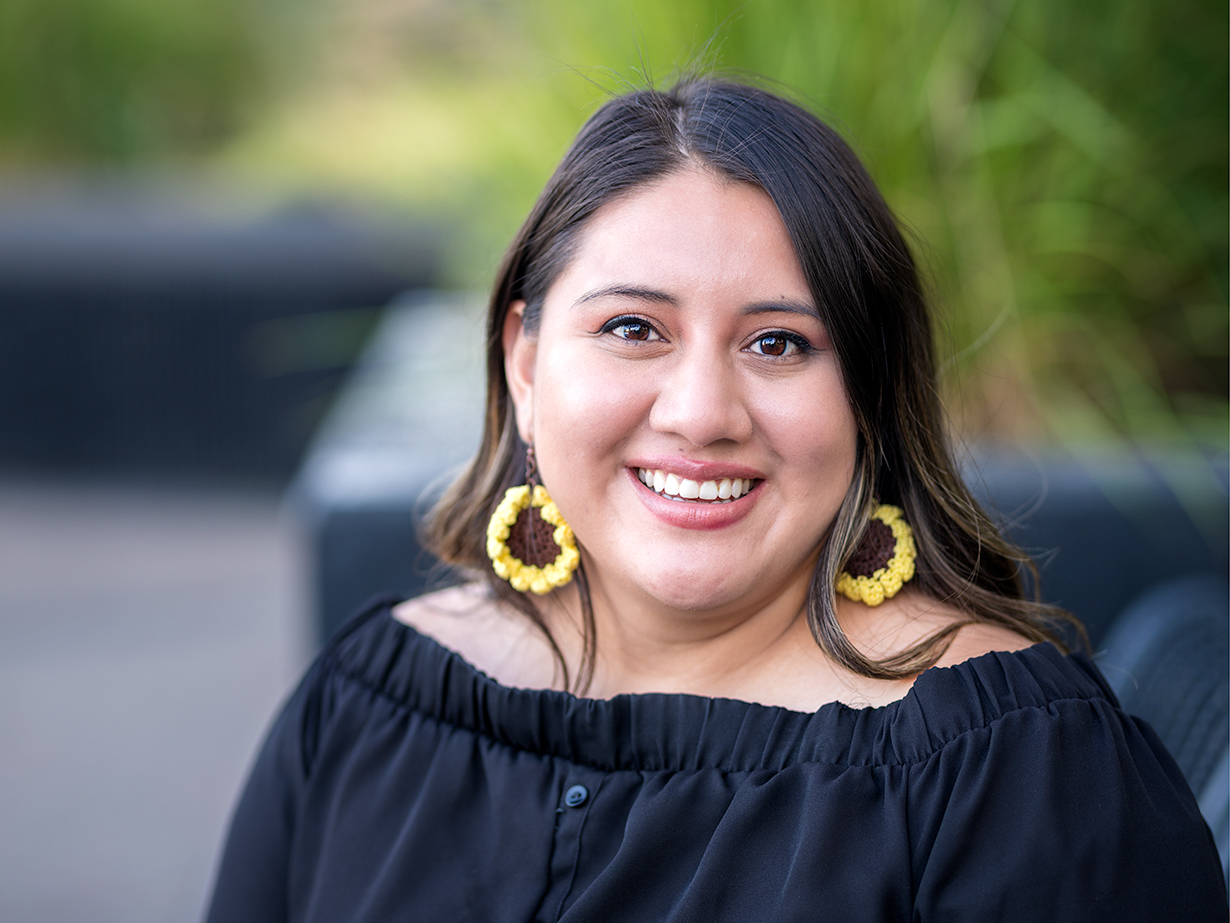 Petrona Dominguez remembers being featured in her new school’s newspaper as one of the first Hispanics to enroll there. At the time, the five-year-old didn’t understand some of the words other students called her, like “wetback.” When she arrived in the United States, she says, “I spoke mostly Q’anjob’al but little Spanish and no English.”

Petrona Dominguez Francisco was born in 1996 in Soloma Huehuetenango, Guatemala. Her family immigrated to Forest Grove, Oregon, when she was four years old. Growing up, she struggled with her identity. “I wanted to fit in with my surroundings, and it seemed like it had to be either white or Mexican,” she says, “(I didn’t realize) I was more than that and didn’t have to fit in with either of those, really.”

With her gentle eyes, easy-going smile, and long, flowing hair,  Domingueez says she learned to never bring attention to herself. As an extrovert, this was not easy. “I was always reminded to not talk about where I came from, and to not get in trouble. There was a lot of, ‘Don’t do this, don’t do that.’ ” However, her parents never explicitly told her she was undocumented.

Around the 2012 election, Dominguez began piecing together her undocumented status. In her high school politics class at Forest Grove High School, she remembers how some of her classmates talked about immigrants. One student commented that they didn’t know why immigrants needed a driver’s license and that they should use the bus instead. “It was the way they phrased it,” says Dominguez. “When I heard that statement, I completely froze because for some reason they were looking at me. I’ll never forget that.”

Sophomore year in high school was when she finally realized her status. Dominguez wanted to prepare for college and took her parents to a college readiness meeting. There, they learned about the requirements for FAFSA, the Free Application for Federal Student Aid. To be eligible, recipients must prove their US citizenship. “After the first five minutes, my parents look at what’s being required for FAFSA, and we leave. I had no idea why we left. I was angry and frustrated,” says Dominguez. “That’s when they told me, ‘You will not have the same opportunities as other people in that room because you don’t meet the requirements.’”

It suddenly began to make sense why her parents had denied her the chance to take exchange opportunities, attend sleepovers, or go to a friend’s house. Dominguez understood she was undocumented.

Then, in 2012, the Obama administration introduced the Deferred Action for Childhood Arrivals (DACA) program. When Dominguez received her DACA card, her world changed. “Getting my DACA card completely opened my eyes and perspective,” she says. “I finally was able to get my drivers license, and that was a moment of change for me.”

At Portland Community College, Dominguez became involved with the Oregon Leadership Institute, a program that focuses on the heritage of its participants and mentors Latinx high school students. She took classes about Chicano/Latino studies and met other undocumented people. “I became comfortable with who I was and my background. That (program) changed me as a person. I stopped being scared to share about myself,” she says. “There was a passion in me that sparked, a sense of understanding why I was present in the world.”

In 2018, Dominguez flew to Washington, D.C., to protest with the Cosecha movement, a national effort to advocate  for the  protection, dignity, and rights of immigrants. There, she met up with the Dream 7, a group of seven undocumented immigrants who participated in a hunger strike behind bars for the legal status of Dreamers. They invited Dominguez to a rally, and the group participated in a Congressional sit-in. It was the first time Dominguez was arrested for civil disobedience.

“That was when I finally confronted this fear that had been instilled by my family, the fear of being noticed for being different,” she says. “From then on, I have stopped being terrified of the police. It’s over – that fear.”

Dominguez is finishing her bachelors in social work at PSU while working full-time as the Advocacy and Leadership Program Coordinator at Adelante Mujeres. In the future, she plans to continue advocating for immigrant rights and wants to work towards a master’s degree.

“It goes back to this idea of being proactive,” she explains. “Whatever ends up happening (with the decision about DACA recipients), the point is that this country is our home. I want to leave a legacy showing that I was able to do something in this historical moment.”