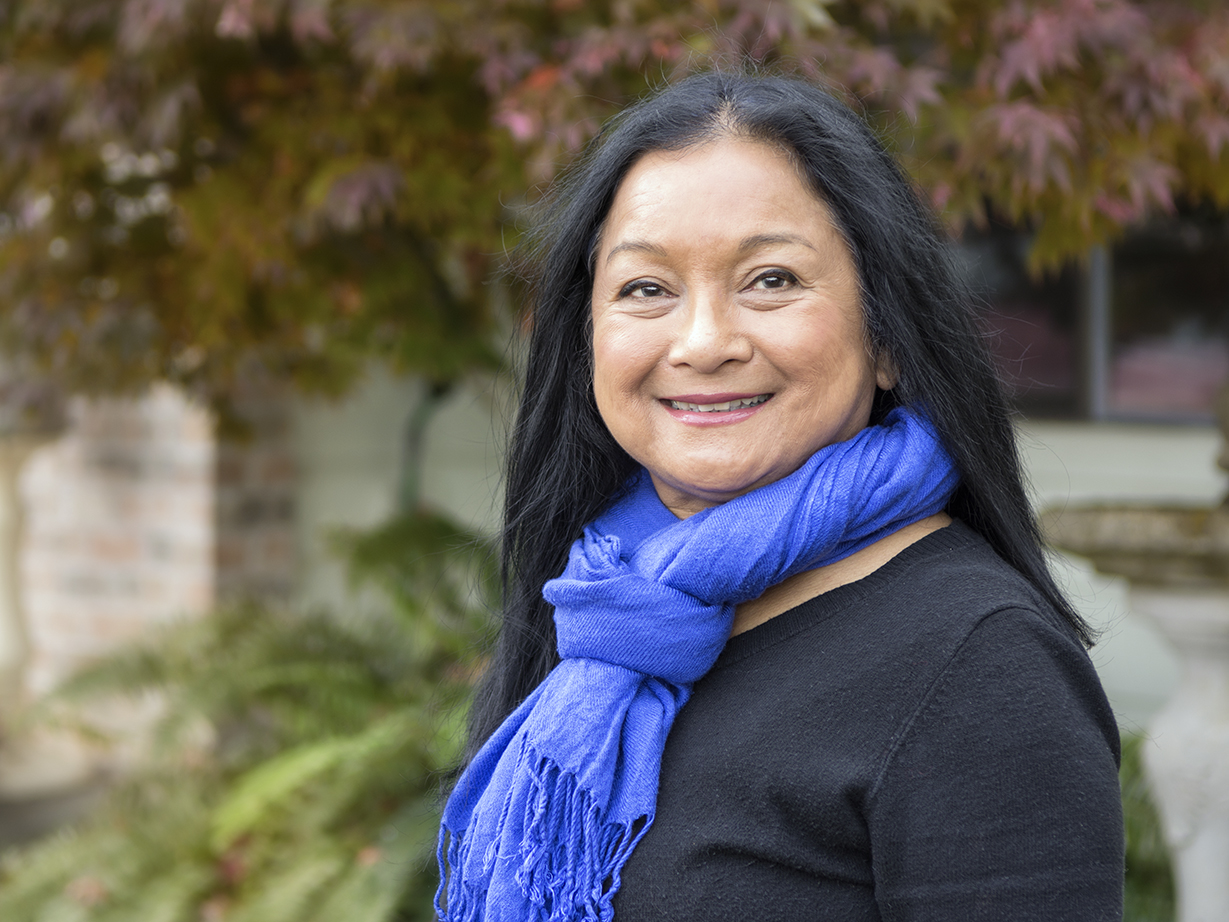 Kathy’s home is filled with art. Her paintings hang on nearly every wall of her Gresham, Oregon home. Through them, her family, history, and culture are brought to life. Kathy is an accomplished graphic designer, teacher, and painter.

Kathy immigrated from the Philippines with her parents and five siblings in 1949 when she was just a year old. Her father had been a Philippine Scout with the Asian Foreign Troops in World War II. The family was able to immigrate to the United States after he became a commissioned officer and was transferred to Fort Benning, Georgia.

When her family left for the United States, her grandmother kissed them goodbye and never saw them again. Kathy’s pictures became her only physical connection to her grandmother, a way to connect despite the hundreds of miles separating them. “My earliest recollection of creating something was sending pictures to my grandmother back in the Philippines, and she just loved them,” she says.

Kathy’s parents always encouraged her to draw. “Mom would be in the kitchen cooking and one of the walls was semi-gloss and she gave me chalk and I got to make murals all over the wall,” she recalls. She also remembers drawing pictures of the people around her, a tight-knit community made up of other Filipino families on the base.

While Kathy and her family remained relatively isolated and protected within Fort Benning, once off the base it was a different world entirely. The 1950’s South was not a welcoming place for immigrants. Kathy recalls, “I knew we were definitely different. They didn’t know what to make of us.” After a few years, the family left Georgia and moved to Palo Alto, California. They had family close by, and California’s larger Filipino community helped Kathy to feel more connected to her culture.

Her father, now retired from the military, started his own accounting business, but many Asian veterans were not as fortunate. “So many of them died in poverty and were not able to reunite with their families,” she says. She has since created a painting portraying her father in uniform with a flowing American flag. She titled it Forgotten Heroes, in honor of Asian veterans.

After graduating high school, Kathy attended UC Davis to study art and sociology, but she had to take a break and help her family after the loss of her brother-in-law in Vietnam in 1968. She never gave up on her own education, however, and after six children and nearly 20 years, Kathy graduated with a bachelor’s degree in Art from Colorado State University. “I wanted to be an example of completion despite obstacles,” she says, tearing up slightly as she explains her parents’ inspiration. “Knowing the losses they experienced during the war and how they had to survive in America…makes any little inconvenience for me so minimal,” she says. “You never give up, you always find a way.”

Kathy, her husband, and their children moved to Gresham, Oregon in the early 1990’s, and she decided to focus on fine art. Kathy’s art has since evolved into a deeply personal reflection of her family and culture. She often includes images of water or mirrors as they “enable you to see things in a different way,” she says. Her Heritage Series depicts the stories and memories of her family and her experiences growing up in America. These paintings are “very symbolic, more representational work.” Her paintings are well-regarded and have been featured in local galleries such as the Columbia River Gallery in Troutdale.

A few years ago, Kathy began another series of works after her youngest daughter was diagnosed with lymphoma. Entitled the Healing Series, she “was going to paint pictures of healthy red blood cells. Anything that [her daughter] could see visually and imagine.” Kathy’s grandmother, a healer herself, inspired these works. Her daughter is now cancer-free.

Art has always remained a steady, reassuring presence for Kathy. Her talent has allowed her to to connect with her family and honor her Filipino culture. The art and the stories which inspire them are not just beautiful, but deeply meaningful and emotional. She explains, “I decided to paint what I know personally.”