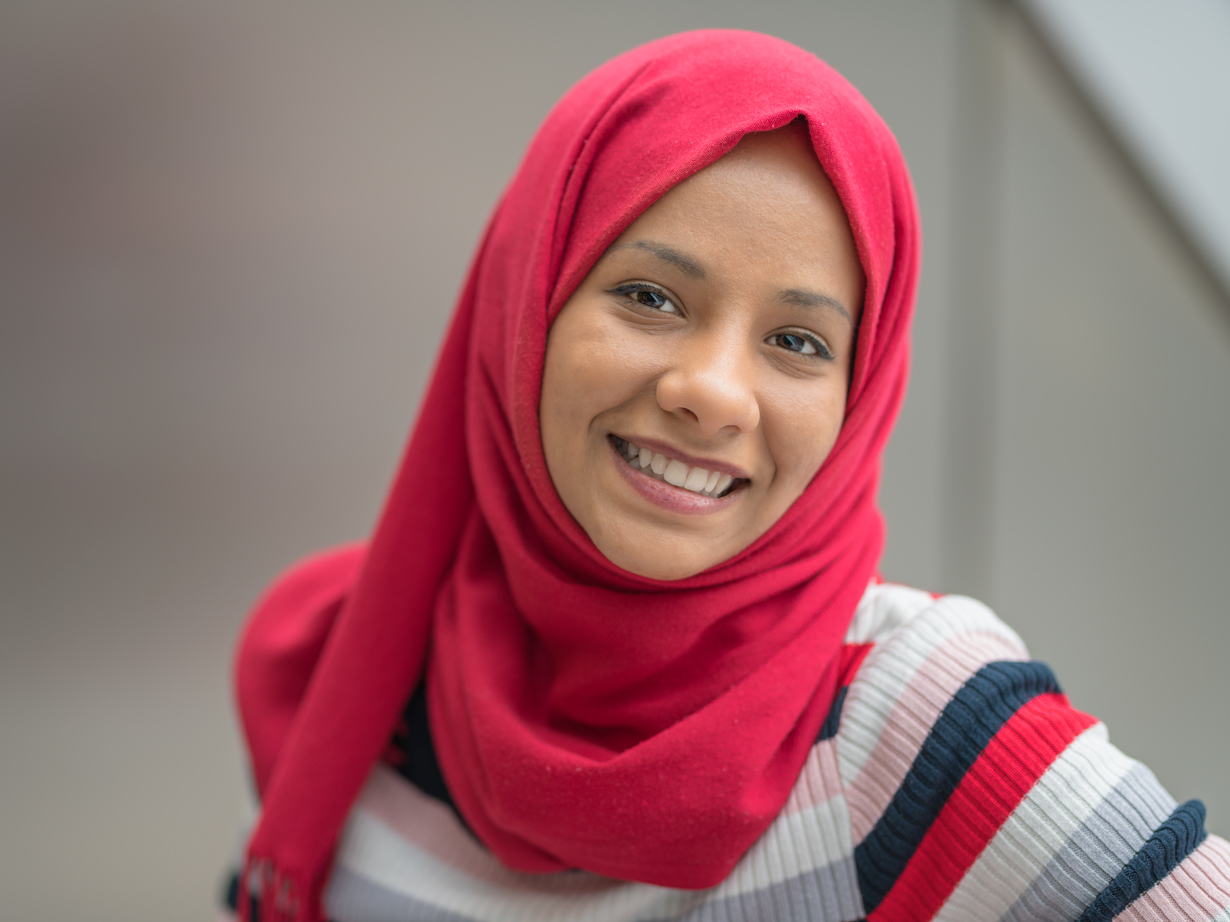 “I will never be seen as an American. I don’t even know what being an American looks like. Is it being lighter? Is it having my hair out? Or is it being willing to educate yourself, be accepting of everyone, being equitable? If so, then I am an American.”

Wafaa, born in Sana’a, Yemen, in 1997, arrived in the United States in 2015, when she was 18 years old. Wafa came to the U.S. compelled to earn an education and get away from the war in Yemen. Wafa credits her father, who still lives in Yemen, for helping her to get to the U.S. She lives in Beaverton now with her mother, who is studying architecture while working full time, and her two older brothers — both graduates of Portland State University.

When Wafa was a young girl, she thought that in order to succeed in the U.S., she needed to perfect an “American accent” or else she wouldn’t be valued as a citizen. She watched television shows and listened to music to learn as much as she could. This process was difficult for her; she felt it prevented her from being herself.

“When I was 6 and learning English, my father told me about unliked accents,” Wafa recalls. “Ours was one of them.”

When Wafa received permanent residency, she realized that her birth name, Wafaa, had been changed; immigration services dropped the last ‘a’. They told her it needed to be “Americanized.”

After only two months of living in the U.S., Wafa started school at Portland Community College. She wanted to form a community and saw hope in the school’s Multicultural Center.

Wafa loved the center, so she began working there as an office assistant. One year later, she climbed the ladder from assistant, to equity ambassador and finally to event coordinator. And yet, despite her achievements, Wafa still faces discrimination for wearing a hijab.

“Yemen is ruled by a queen,” Wafa said. “We drive; we work; we do everything like normal people. Plus, I never have a bad hair day.”

After living in Oregon for seven months, Wafa was called a terrorist. She says it was the first — but not the last — time that happened.

On May 26, 2017, two women — one wearing a hijab — were confronted by a violent, knife-wielding man on the MAX train in Northeast Portland. This tragic event frightened Wafa.

“After that happened, I wouldn’t even think of taking the MAX,” Wafa said. “What if no one had been there to step in?”

Wafa is determined to pursue her goals, even through distress. Her dream since childhood has been to become an ambassador.

“I want to show people that you can represent an entire country — the U.S. — and not be white,” Wafa said.

Wafa attends Portland State University where she double majors in human resources management, and management and leadership; minoring in civic leadership. Wafa wants to attend graduate school and study public administration. She works at PSU’s Multicultural Student Center, where she strives to create a gathering space for people from the Middle East, North Africa and South Asia region.