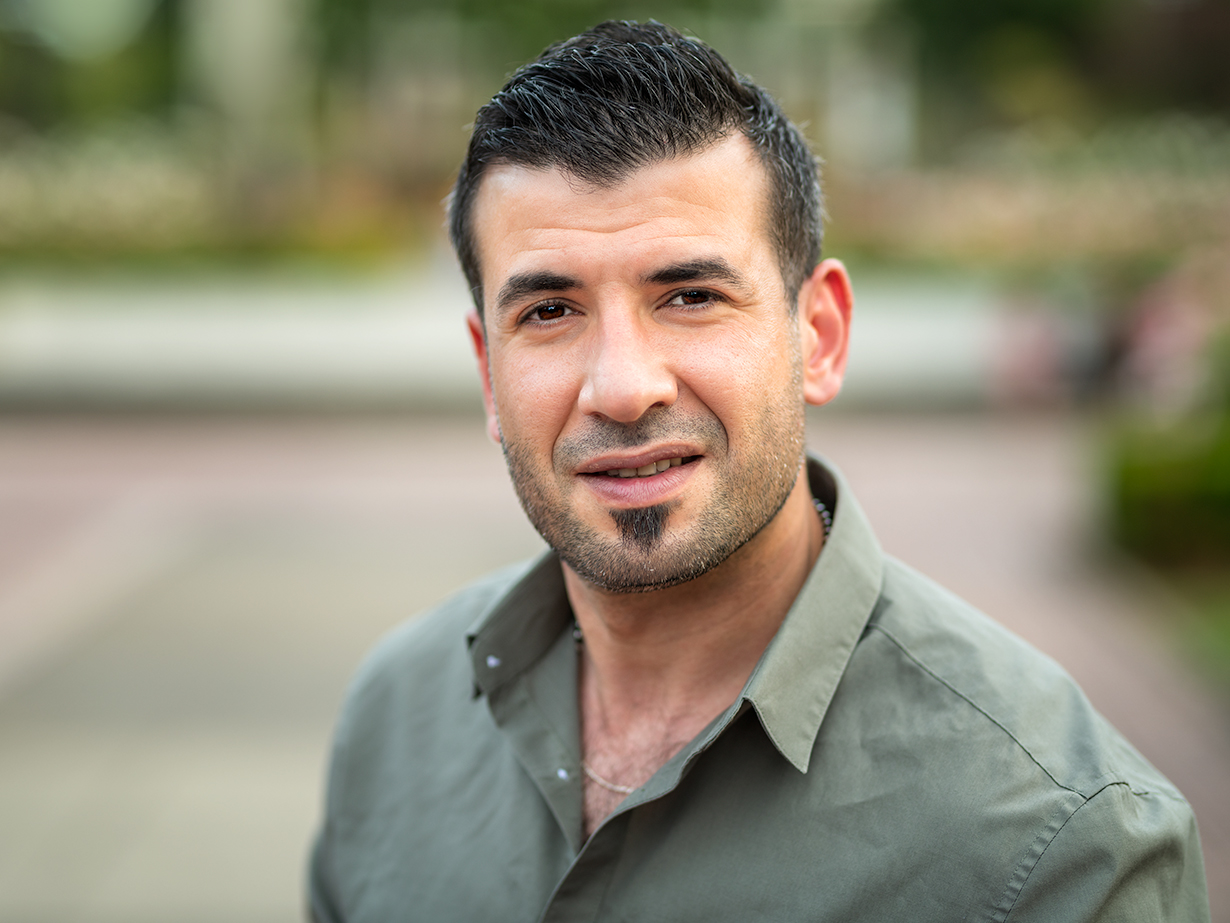 This is a story of a man whose determination, courage, ability to deal with unexpected adversity, and willingness to take risks brought him from war-torn Iraq to America, with more stops in between than the hero of Around the World in Eighty Days.

We often think that immigration to the United States is a nonstop voyage from one’s country of origin to the golden doors of freedom. This image might have described the journey to Ellis Island in the 1880s, but it is hardly the case today for many newcomers. Ghaith (pronounced “Jay-eth”) Sahib’s journey may be more typical, especially for refugees from the Middle East. His peripatetic wanderings took him on an extraordinarily circuitous route from Iraq to Syria to Lebanon to India to France to Germany to Holland, and finally to Portland, Oregon, USA.

Ghaith was born in Baghdad in 1983, in the midst of the Iraq-Iran war. His earliest memories include stories of family members killed in that conflict. When Ghaith was seven, American bombs falling during the First Gulf War forced him and his family to hide in their house. He was a small child, and the bombs also frightened him. Many years later, safely and gratefully in the U.S., he realized the irony that when he was young he regarded America as the enemy for its terrifying bombardments.

Forced to learn to fire weapons as a student in middle and high schools, he developed a life-long aversion to war. His country was suffering enormous casualties under the dictatorship of Sadam Hussein–a ruler his parents detested–and he began thinking about leaving Iraq. But expressing pacifist sentiments was dangerous, so Ghaith kept his thoughts to himself.

Ghaith hoped to become a lawyer, but his grades were not good enough. Instead he entered the College for Business Management at the University of Baghdad. Still, the urge to escape a war-torn country dogged him, and though he was devoted to his father, a teacher of Classic Arabic Language, his mother, a seamstress, and his three siblings, he felt it was necessary to leave Iraq.

He first went to Syria, but it was hard to get a decent job; so he departed for Lebanon, where he had a relative. There he found work in a pastry factory, cracking eggs. It was the first hint of the career he would build in the U.S., where he has become a restaurateur. All the while he worried about his family’s safety, and so returned to Baghdad. Now a second intimation of his eventual work appeared. With his mother increasingly occupied with her sewing, Ghaith resumed the cooking at home he had begun at 13–specializing in eggs and potatoes–since he did not want anyone else to take his mother’s place in the kitchen.

His second flight from Iraq came after a more severe precipitating event. In 2005, while driving his car on the way to college, the shock waves from an explosion just ahead of his vehicle caused him to black out. He spiked a high fever that sent him into a three-week coma and a hospital stay that lasted more than a month. This experience traumatized him: the slightest noise frightened him, and he saw danger around every corner. Once again he left home, departing Iraq for Syria on the same day U.S. forces hanged Sadam Hussein. He looked for work in Damascus for six months, before deciding that once again he needed to move on.

The only country that would give him a visa was India, and though he did not speak a word of Hindi or English, he flew to Mumbai. He loved that large, pulsating city, but couldn’t help asking himself why he was in India. Fortuitously, in a local coffee house he met an Iranian who encouraged Ghaith to go to Europe and helped him get an Estonian passport. Armed with those fraudulent credentials and hoping this was God’s plan for him, he flew to Paris, where he shredded his Iraqi passport lest he get into trouble. Happily, immigration control didn’t ask him questions in Estonian, a language in which he was no more fluent than he was in Hindi.

Ghaith did not find France to be especially welcoming. But chance was once more on his side: he met a Moroccan who told him Germany was more hospitable to refugees. So off he went again. But after only three days in Germany, he decided that Holland would be more receptive, and in Amsterdam he landed in a refugee camp. But Holland denied him asylum. Running low on options, he found lodging in a Christian hostel. There he had his greatest stroke of good fortune. He encountered a fellow guest, a young woman from some distant place called Portland. Ghaith’s English was so poor he thought she said “Poland.” Was that to be his next stop on his circuitous itinerary?

Ultimately, to his astonished delight, he understood that this beautiful teacher named Tiffany, who helped women escape from sex trafficking, was actually from America.

Reader, he married her!

But first things first. Tiffany returned to the U.S., while Ghaith worked in the hostel. Meanwhile, just as he was contemplating a return to India, he met an Egyptian man who suggested that Switzerland was an inviting nation. But because Ghaith’s immigration status at this point was so sketchy, on his way to that country Ghaith wound up in both Dutch and German jails. He spent several months in prison before he was reunited with Tiffany, who meanwhile had returned to Amsterdam to work as a nanny with a Dutch family. In 2009 the couple finally wed, and made plans to come to Portland, not Poland!

They arrived in Oregon the next year, and Ghaith got work at a gas station. But the idea of returning to his love for cooking loomed large, so with $600 he bought a trailer and opened Portland’s first Iraqi food cart, on S.E. Division Street, evocatively called Aladdin’s Castle Café. The name deliberately avoided the word “Iraq,” for Ghaith feared that with the war still raging American customers would shun a place with that name. To his surprise, many of his early customers were Iraq war veterans who had come to love that country’s cuisine.

Basing his dishes not on recipes but entirely on vivid food memories from his family’s kitchen and from his own time in Syria, Ghaith was following the impulse of so many immigrants: to recreate a semblance of home and culture through food.

His parents came to Portland to be with them when he and Tiffany had their first child, and were there to comfort them when the baby tragically died at birth. His parents decided to stay, and when they, Ghaith, and Tiffany opened a brick-and-mortar place, it became a genuine family business. The restaurant, Dar Salam (“The House of Peace” in Arabic), takes its name from the original name of Baghdad, Madiat-as-Salam, when it was established by the Caliph al-Mansur in the eighth century A.D. Ghaith’s restaurant is thus an homage not only to his family’s culinary heritage but to the long history of his native city. Photographs of Iraq decorating the walls and Arabic music filling the space, as well as familiar aromas and the spices–now available at local Middle East markets–all helped soothe the nostalgia he continually felt for his native land.

Eventually his sister and a younger brother also immigrated to Portland. Now they, along with his parents and Ghaith himself, are all U.S. citizens. Until recently his mother helped with the cooking, and his father often dropped by, with a special chair reserved for him. But of course for the moment Dar Salam–in its original NE Portland location and a second version downtown–are both limited to takeout and delivery. Nevertheless, for someone whose picaresque journeying left him undaunted, Ghaith is keeping his hopes high that the 20 employees at both restaurants can soon return to work.

Ghaith and Tiffany divorced last year, but both are active co-parents to their 6-year-old daughter, Malaika.

Ghaith worries that the Trump administration has stoked the fires of American racism and prejudice. He recalls an incident in 2017, when a decorated former Marine who had served in Iraq came into his restaurant and refused to order. Instead he harassed Ghaith’s family and smacked a waiter with a chair. Ghaith, with his own history of adversity, understood that the man must have been suffering from traumatic flashbacks of the war. He felt sympathy for him, and when the veteran eventually apologized to Ghaith and his family, the two men reconciled. They wept together as the man said to Ghaith: “You are my brother for life.” They since have become close friends.

One thought on “A Whirlwind of Unsettlement”