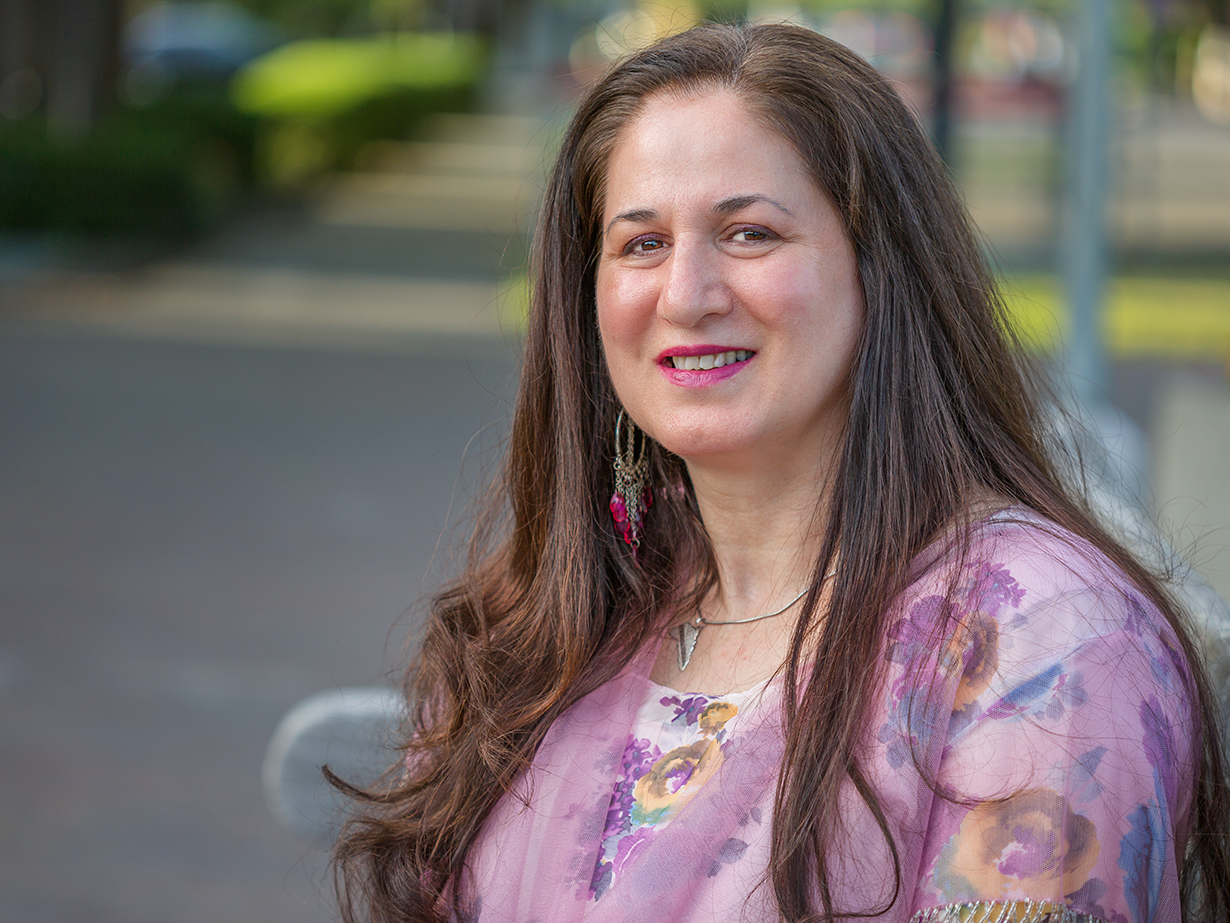 Shabnam Rostami stood in her backyard with her children, watching the Oregon International Air Show. Suddenly, childhood memories  of the traumatic warfare she experienced began to consume her.

“When I heard the loud noises,” she says, “I started crying and screaming at my kids, ‘Run! Run! Hide yourselves!’ I couldn’t remember where I was — I thought we were about to be killed.”

Rostami was born in the Iranian part of Kurdistan in 1968. Since they were young, she and her four sisters and three brothers were taught to carry their Kurdish identity with pride. Her male relatives were all involved in the Peshmerga, the Kurdish military, and her father was a prominent politician. Circumstances demanded that everyone in the family, including the women, knew how to protect themselves and how to use guns in self defense.

These skills became even more critical after the 1979 Iranian Revolution commenced. One of Shabnam’s uncles was killed by a bomb a week before his wedding and another fled to Iraq for six years.

When Ayatollah Ruholla Khomeini came to power, Rostami’s family decided the safest option would be to leave Iran. The women and children were given the choice to stay with family in Tehran, so they could continue their schooling, or accompany the men.

They spent six months in an Iraqi refugee camp, where the extended family, including eight children, lived in one tent.

“It was a very, very bad time,” says Rostami. “Every night, we would have to wake up because it was rainy and water would leak in the tents.”

When one of her brothers got sick, they tried to join other family members in a nearby city, Sulaymaniyah, Iraq. The government refused their request to travel there, so they hiked to the city through the mountains. After a year, they returned to their hometown of Baneh, Iran. But fighting soon broke out again and the family fled to a mountain village in Kurdish Iran.

One morning, Rostami’s father found a bomb attached to their front door. Her cousin was able to slip out a window and defuse it, but the gravity of their situation set in. Immediately, they left Iran again for the outskirts of Sulaymaniyah, where they built a house from the surrounding trees.

“Every night, my dad would go out to make a fire, and he wouldn’t sleep because he was afraid of either wild animals or the Iranian government attacking us,” Rostami remembers.

Six months later, in 1984, Rostami and her family moved to the village of Qalacholan, Iraq. Their house was raided by Iraqi soldiers, who found a compass from an army tank in her father’s possession. Assuming it was used for military purposes, the soldiers arrested them all.

“But the compass was a gift to my father from one of his friends, to use to find the right direction to pray in,” she explains.

After two days in jail, Rostami’s family, except for her father, was released and left on the side of a road.

“The Iraqi soldiers changed their minds about trading us with Iran since this was in the middle of the Iran-Iraq War,” she says.

“We were able to find refuge in a nearby mountain, and we built little one-room houses for shelter. My dad was still in jail, so our Kurdish leader, Abdul Rahman Ghassemlou, went to Baghdad to plead on his behalf. After 40 days, my dad was finally released from jail.”

Rostami’s family returned to Sulaymaniyah and stayed there for 12 years. During this time, fighting continued in nearby areas, including a genocide of the Kurdish community commissioned by Iraqi President Saddam Hussein.

While attending a conference for the Peshmerga with her father, Rostami met a handsome Kurdish soldier. Their long-distance relationship developed through letters and brief visits. Two years later, in 1993, they got married on Valentine’s Day.

Her husband was a leader of a small group of Peshmerga, and every day Rostami was worried for his life. One time, he had to go into hiding while on a mission.

Their first son was born at the end of 1993. By 1996, the couple decided it was too dangerous to remain in Sulaymaniyah. They took a bus northwest to Zakho, Iraq, and applied for refugee status, hoping to join Rostami’s parents and younger brother, who had by then emigrated to the Netherlands. But the United Nations denied their application, so while pregnant with their second child, Rostami, her husband, and their two-year-old son crossed into Turkey on foot.

In Silopi, Turkey, they went to a UN office to plead their case. Instead they were arrested and brought to jail.

After five days, a Turkish judge ruled that it was not safe for them to return to Iran. But a Turkish soldier disagreed with the ruling and brought them back to jail.

“I was five months pregnant at that time, and I had a 2-year-old son,” Rostami recalls. “There was a point where we were all in a room 11 floors up, and I looked outside the window and thought, ‘I can’t do this anymore. I’m going to jump.’ But when I saw my little son, I realized I couldn’t do that.

“Then, that very night, another Turkish soldier came on duty and released us from jail.”

Rostami and her family stayed in Silopi until she gave birth to her daughter. They applied for refugee status again, and this time, were approved to move to the United States. In 1997, they moved to Texas with their 3-year-old son and 9-month-old daughter.

“When we came to the United States, we had just $5,” Rostami says.

After struggling to find work, they moved to Kansas City, Mo., where they found a supportive Kurdish community. Rostami’s husband worked two jobs and a second son was born there.

Seven years later, the family moved to Portland, Ore., where Rostami’s husband started a town-car service with a friend. A third son was born and now Rostami is thinking of starting her own business, selling clothing she makes herself using fabrics imported from her homeland.

“Oregon is like a home now. I don’t want to go back,” Rostami says. “My life is here now, my kids are here. We have a happy life, happy family.

“There were many nights I cried growing up,” she admits. “But I never blamed my parents for it. We decided to live that life for freedom. We are Kurdish, and we will always be Kurdish.”

One thought on “A Nation Without Borders”