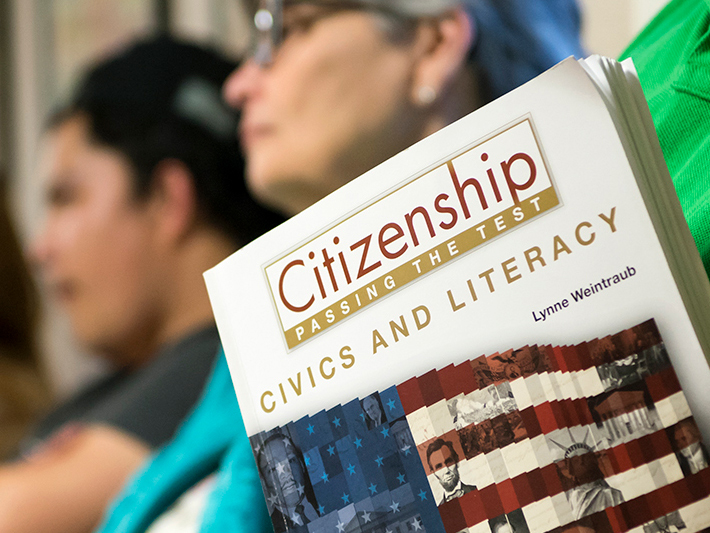 “This country is still the ‘shining city on the hill’ but the path up is getting steeper,” says Ruth Lesser, reflecting on the difficult road she is still traveling to become a permanent resident in the U.S.

Ruth, who uses a pseudonym because her immigration status is still unresolved, was born in southern China in the late 1980s. She grew up an only child, but part of a large extended family.

“I was taught from an early age that I must work hard and succeed at school,” she says. “So I’m very competitive and don’t like to lose.”

Because she excelled in languages, she decided to major in communications in college. She wanted to become an investigative journalist, but China discourages that type of reporting so she applied for graduate school in the U.S.

She was admitted to several colleges but did not receive any financial aid; her parents paid all her expenses. Lesser earned her M.A. in 2012.

As a student she had an F-1 visa, which allows Optional Practical Training (OPT) of a year or two depending on the student’s field. After Lesser’s OPT,  an internship with an event production company, she found a full-time job as a marketing event producer. Her new employer agreed to sponsor her for an H-1B visa, which allows the holder to work temporarily in the U.S.

She had been hired for her language skills, but the job proved disappointing. She worked 10 -12 hours a day, her salary was low, and she was given very little creative independence. She felt exploited but, as she points out, “Without the help from the company I would not have been able to stay in the U.S. So it was not an ideal work situation.”

Lesser wanted to stay in the U.S. because she appreciated having the freedom to make her own decisions about work and living situations and enjoyed a less polluted environment. To stay, she needed a Green Card, which would make her a permanent resident.

In 2016 she found another, more congenial job with a company that started the process of sponsoring her for a Green Card. “This officially put me in the queue for permanent residency,” Ruth explains. “But it is a long application process with many undefined waiting periods when you can’t get any answers about where you stand.”

Once in the queue, she was allowed to renew her H-1B visa and her employer began the process of proving that she had such unique skills that her position could not be filled by a U.S. citizen. The government challenged the company’s claims, however, requiring extensive paperwork, including detailed background information about Lesser, and about company finances, as well as letters of support from experts.

Because of all this scrutiny, Lesser says, “I have to be very careful and alert about my situation at work at all times. I need to not only prove my legitimacy to the system, but I need to also make sure my employer doesn’t decide I am too much trouble and stop helping me.”

The Immigration Act of 1990 set limits on the number of legal immigrants from each country so that people from countries with the most applicants must wait the longest for their applications to be considered. China, along with Mexico, the Philippines, India, and Vietnam, currently has one of the longest waiting lists. Recent government policy changes are also increasing wait times. New Data Show H-1B Denial Rates Reaching Highest Levels

While she waits, Lesser’s H-1B visa has now been extended for the third time. “But my life is on hold all this time,” she says, explaining that her only trips home have been business trips with short side excursions to see her relatives. “I don’t dare go on any personal trips out of the U.S. for fear of not being allowed to return. I can’t visit my elderly grandparents and my parents can’t leave them to come here so I haven’t seen my family for three years.”

“I used to think that coming to the US was challenging, but worth it,” she comments. “But now, I’m not sure this country is the answer for everyone looking for a better life. My advice to anyone considering immigration anywhere is to think carefully about what you most want. You might find what you’re looking for in a new country but you might just find the life you want in your home country too.”

One thought on “Think About What You Want Most”