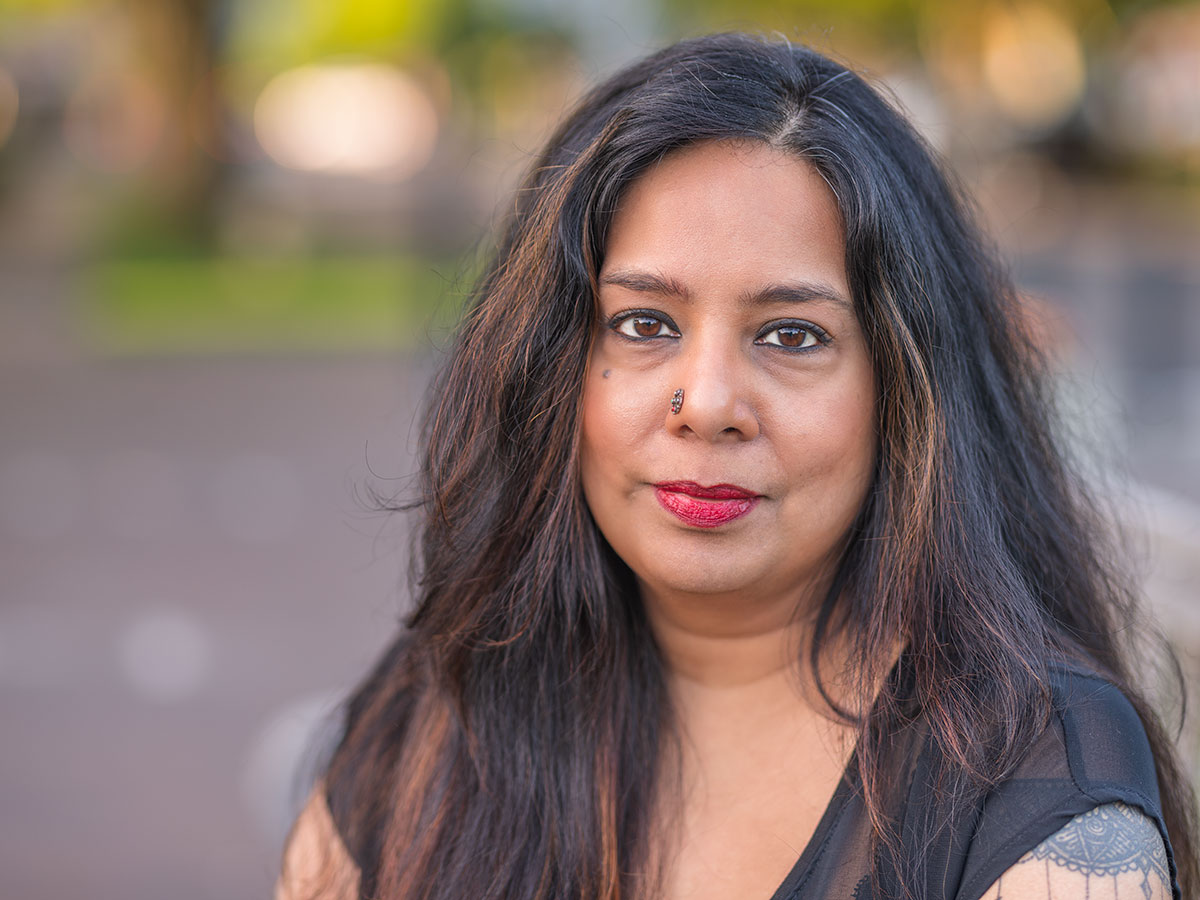 Until she met her mentor, one of the best-known art dealers in Bangalore, India, Mrunalini Giri did not think of herself as an artist. “I was just somebody who painted,” she says.“When I met this lady, what really struck me was that she said ‘you’re a fantastic artist.’ I was 33 and that was the first time that someone had called me an artist.”

Her mentor convinced her to follow her passion for art, and Giri has continued to develop her unique style.

Giri was born in Bangalore, India, in 1977. Only a year later she and her parents moved to Germany so her father could attend grad school. They moved every few years throughout her childhood, to several locations within Germany, to New Zealand, and to Saudi Arabia in her teens.

“We went on vacation to India when I was about 5 years old, and I said to my mom, ‘Everyone here looks like me!’ Because I never saw people that looked like me in Germany.”

Through all of the moving, Giri had art. She came from a long line of skilled artists, and the passion carried down to her, helping her adjust to the moves to vastly different countries and cultures. “I have this repetitive drawing, almost like doodling, that I have done my whole life,” she says. “That became this meditative process through which I was able to cope with anxieties that I was struggling with.”

Giri’s mother was a talented Tanjore painter, and growing up, Giri was always pulled into the process of making traditional Indian art. “There were always flecks of gold leaf lying on the table, and there were jars of gum arabic in our refrigerator. My mom would have me sanding down all of her plywood boards, and helping her with the drawing. I didn’t like it, but I did it. I was more interested in the European canon.”

Giri’s main experience of India was through the lens of her parents and other Indian expats. “It’s almost like I got this distilled version of India that I grew up in,” she explains. “You’re growing up with elements of the culture, but you’re not growing up in the culture itself.”

So at 20 years old, Giri decided to move to Bangalore. “I went back hoping to not feel like an outsider anymore, but I found I felt more like an outsider in Bangalore than I did outside of India.” Though she didn’t fit in as she had hoped she would, she fell in love with life in Bangalore and a few years later, met the man who would become her husband.

Giri and her fiance looked forward to being able to date in peace for a few years before getting married but were rushed into marriage by a family emergency.

The day after their engagement, his mother collapsed and was rushed to the hospital, where she was found to have advanced lung cancer. From the hospital she called Giri’s dad and said, “You have to get the kids married.” So Giri’s parents rushed to plan an entire extravagant wedding in a week. “Indian weddings are basically about the parents being able to show off their success in life,” Giri explains. “So my parents had huge plans.”

But his mother couldn’t wait. Two days later, “My husband and I both got phone calls at work about 12 o’clock in the afternoon and I was told to come home. My dad said ‘you’re getting married at 4 o’clock today.’”

“My mom was crying that she didn’t have the opportunity to put turmeric on me before I got married,” Giri remembers. “My dad was experiencing trouble of a different kind trying to find a temple and a priest that was willing to officiate the ceremony, because they thought we were runaway, or that I was pregnant or something. But he did manage to find a little temple and found a priest that would officiate on such short notice. And at 4 o’clock I got married.

“Whatever was meant to happen, happened, and whoever was meant to be there was there at 4 o’clock at that spot on that day. The next morning I got a call saying that my mother-in-law had passed away.”

The couple was thrown into adulthood, and in two years they had a baby girl. Giri quit her teaching job and stayed home to take care of her daughter.

A few years later at a charity lunch in Bangalore, Giri connected with an art collector, Meenu Jaypuria. “You know those turning points in your life? Those points where you meet somebody and your entire life goes down a different trajectory?” Giri asks. “That is what it was like for me when I met her.”

Giri was interested in the art market, and Jaypuria offered her a job at her art gallery, Mahua Gallery. “So I’m suddenly dealing with high-value artwork, and learning so much about the business aspect of it all,” she says. During the next few years the two became very close, and Jaypuria saw value in Giri’s art, even before Giri realized it herself.

After a couple of years of working at the gallery, Jaypuria convinced Giri that it was time for her to start following her own journey with art with the new advantage of knowing more about the dealing of art.

“I went off and did three paintings that were completely different from anything I had ever done before,” Giri remembers. “I showed them to her and she said ‘okay, put them in the gallery.’” Suddenly Giri went from working in the art gallery to having her own art on display with that of some of the best artists in India. “It was absolutely surreal.”

“At that time I was also able to find my voice. I had a lot of skill before, but I think for any artist to jump to that next level, you need to find a voice that is yours, that makes your work uniquely identifiable from everyone else.” That began her career as an artist.

In 2017 the family moved to Portland for her husband’s job. This gave Giri the chance to start working with Waterstone Gallery in the Pearl District of Portland.

In more recent years the impact of both the issue of stolen artwork in many Western museums and the distance from home has prompted Giri to revert back to using traditional techniques and materials from India.

“There was this need to just suddenly reject the Western art techniques that I had been working with forever,” Giri says. “Here we are in India placing so much value on Western art and Western art history — even I was caught up in it — without understanding or realizing that our own tradition and our own history predates it by many hundreds of years. I felt like a hypocrite.

“The work is still contemporary in its aesthetic and composition,” she continues, “but the materials and the techniques are hundreds of years old. I started painting on papers that I was getting from Rajasthan, and going back to practices that were rooted in Indian history and tradition. The papers were approximately 150 years old, and they were accounting letters, expenditure statements, and inventory lists. I collected these papers and painted on top of them.”

Through her art, “I was processing the idea of home. How do we define home? For me, home changed every two years. Is home here, where I am living right now, in Portland, or is home in India? And is home India because my passport is Indian, or is home all the pages within the covers of my passport where I have lived? This concept of home becomes very complex.”

In a way, she reflects, “It’s almost like I’ve come full circle, going back to what I should have been doing all along but didn’t. It’s always been there, but I think I had to go on the journey to find that what I was looking for had been there all along. And suddenly I find that I’ve gone back to my roots, and it’s become so important for me.”