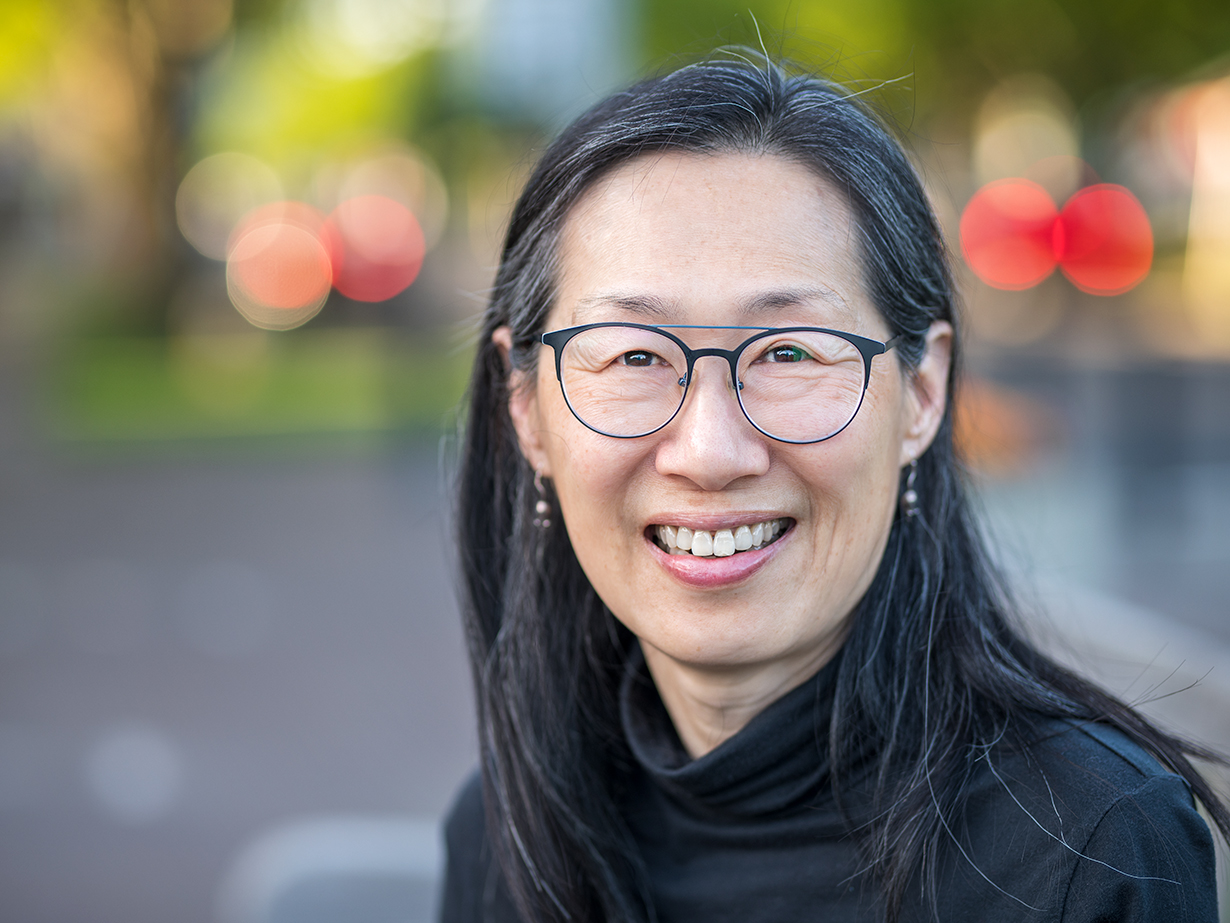 Through her love for patterns and problem solving, Shu-Ju Wang creates art that highlights the immigrant experience and the importance of ecology to all people, regardless of nationality.

Born in Taipei, Taiwan, in 1960, Wang grew up in a quiet city neighborhood of townhouses, with small shops at street level.  She had an early fascination with patterns. Her father, traveling frequently due to his military career, would bring home Sears catalogs from his trips abroad.

“I would spend hours poring over the sets of dishes pictured,” she remembers, “And just circling all the patterns that I liked.”

Through a chance encounter while in the U.S. attending war college, her father got acquainted with a family in California, the Denistons, who had hosted many international exchange students. The Denistons invited Shu-Ju to come live with them and attend high school in the U.S.

Two days after she arrived in Walnut Creek, California, in 1975, Wang started classes at North Gate High School. With the support of her host family and her predilection for patterns, she acclimated to the U.S. school system, and did well in her classes, especially math.

After one year in Walnut Creek, Wang learned that her host father had gotten a new job 3,000 miles away. So at the beginning of her junior year, Wang and her host family moved to Belle Mead, N.J., where she completed high school.

Wang’s problem-solving approach also influenced her choice of college major. She got a computer science degree from Rutgers University in New Jersey. There she reconnected with her Chinese roots through friendships with other students from Taiwan. She discovered that she enjoyed speaking Mandarin and eating Chinese food with them.

For graduate school she enrolled at Oregon State University in Corvallis, Ore., and, for the first time, experienced life in a small town.

While at Oregon State, Wang was offered a job at Tektronix. She  decided to leave school in order to move to Beaverton, Ore. and start work as a software design engineer.

Wang loved her job, but she needed other ways to fulfill her passions, so she turned to art.

“Unlike engineering, where having a really good solution is important, in art the process is just as important as the solution,” she explains. “Having a good solution is good, but there may be a hundred different solutions when you’re making art.”

When she noticed that the Oregon School of Arts and Craft was only minutes away from her work, it felt like fate.

“It was so set up for me,” she explains, “the school was just right there. It was like God wanted me to go to art school.”

Through art she finally found a way to immerse herself in patterns and problem solving, and in 2000 she quit her job to become a full-time artist.

“Art is a really good way for me to learn about the world,” she says, “Pretty much everything I do is project based, so I go out and I do a lot of research, and it gives me a reason to learn more.”

In her installation piece, The Laundry Maze, Wang blended the modern day experience of many immigrants with historical references to the laundries opened by many Chinese immigrants when they arrived in the U.S.

“My grandparents in Taiwan had a laundry,” she says. “And as a little kid I would go into this space where all the clothes were hung. It was like a maze where you can’t see out. That experience of being in the laundry, the feeling of being lost, having fun, but still being lost, came back to me when I thought about the immigration experience.”

Inspired by this recollection, Wang interviewed other immigrants she met in ESL classes, creating a T-shirt for each one listing the person’s job before and after immigrating. She hung the shirts on clotheslines in the lobby of the Portland Building in 2012.

“So often people have to give up their professions when they emigrate,” she says. “I wanted to make a statement about that.”

In the future Wang intends to focus her art on ecology, as she sees the climate crisis as something that affects everyone, regardless of who they are or where they came from.

“The climate crisis is really making everything else worse, whether people know it or not, it makes all these other social problems worse,” she warns. “And It’s not really an option for us, I think we have to pay attention.”