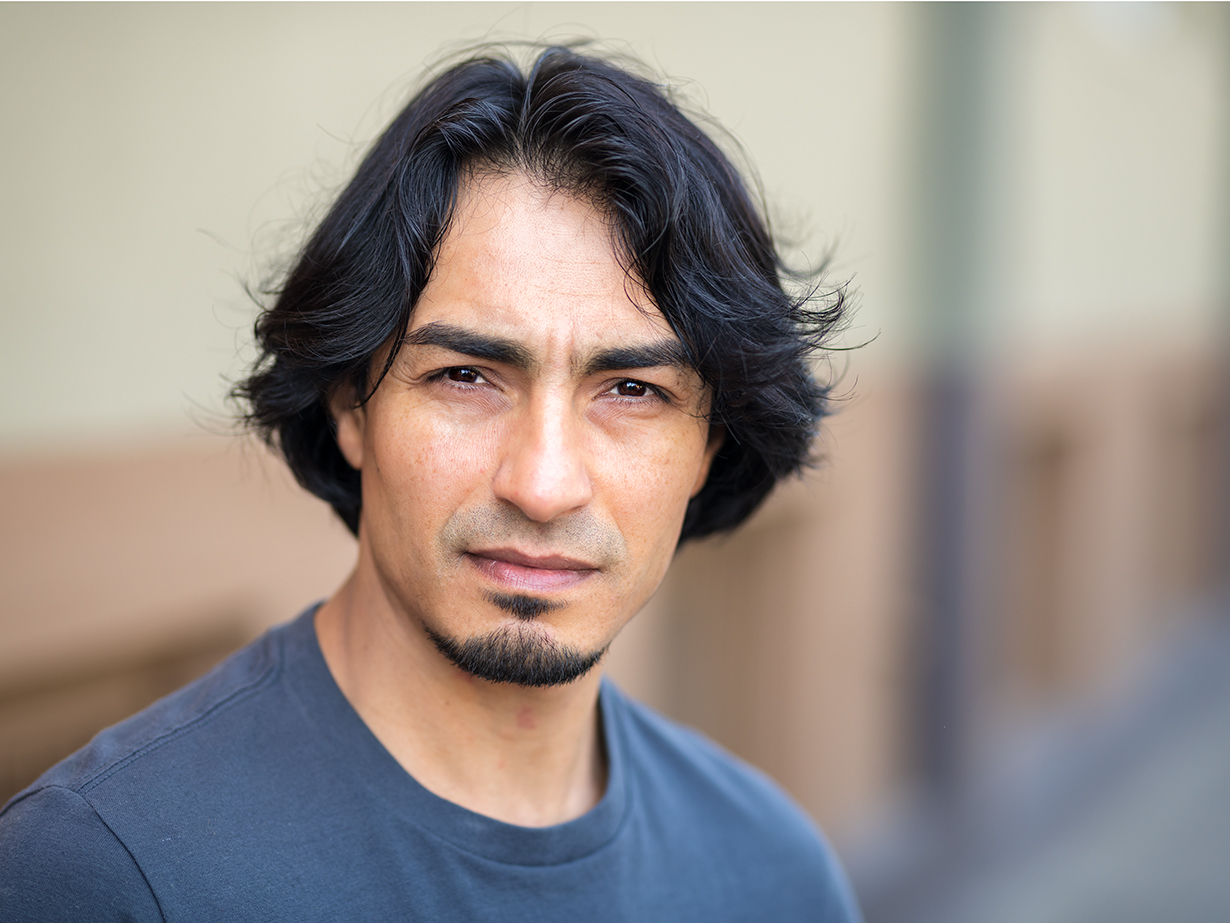 On a Wednesday afternoon in 2003, Samir Khurshid burned his own painting. The rest of his 480 works were also destroyed that year, he said, in his hometown of Tus, Iraq. That’s because he was an artist in the Iraqi military, and his art depicted only one subject: Saddam Hussein.

After the US-led invasion of Iraq, people were demolishing anything with Hussein’s likeness on it, to ensure he’d be “totally gone,” Khurshid explains.

Since the destruction of his painting, Khurshid has created hundreds of other works to replace it, from painting for the U.S. military to “ghost painting” in Turkey, and to choosing his own subjects at his own studio in Portland, Oregon.

Khurshid was born in 1978 in the northern Iraqi city of Tus to an Iraqi Turkmen family; he and his ten siblings spoke Arabic at school and Turkish at home. Art became his “toy” as soon as he could walk. He used to steal pencils from his sister to draw birds, cows, and sheep on any surface he could find — on floors and walls, and hidden under the rugs that hung in their home.

“My mom knew it was me [drawing on the walls],” Khurshid remembers. “So she bought some sketchbooks for me, and I drew so much that I would fall asleep on top of the sketchbooks.”

He tried replicating famous works, and at age 12, began drawing portraits for his neighbors. He also began something of a small business. His friends would point out their girlfriends, and Khurshid would draw portraits of the girls and get paid in pencils, brushes or t-shirts, but rarely money.

“They would say over the microphone, ‘Who can cut hair, who can build, who can do calligraphy?’ My hand would always go up. ‘You can even do art?’ they said. ‘We need people to paint Saddam.’”

Saddam needed to be everywhere, so they needed a lot of artists, Kurshid explains. “I painted all the Saddams for every situation.”

Khurshid never met the dictator, and so relied on a picture to paint him in portraits and on murals. Perfecting the resemblance nearly 500 times refined his skills and compensated for his lack of formal training. Without Saddam, he wouldn’t be the painter he is, Khurshid states.

After 2003, he reconnected with an American friend and soldier from Tus and began painting for soldiers at the US military base in Baghdad. Painting the soldiers’ families, dogs, cars, and motorcycles allowed him to support himself and his family. But in 2006, he found a threatening note from radical Islamists on the windshield of his car and realized he had to leave, for his family’s safety.

It would take him almost four years to find a safe place to call home. First, he lived with some fellow Iraqis in Istanbul for a few months, trying to find ways to cross without a visa into Italy. .

Later he started the refugee resettlement process through the United Nations and was sent to Gaziantep, in southern Turkey, where he lived with 20 other Iraqis and had to register with the police every day. Since as a refugee he couldn’t legally work, he relied on his savings from Iraq and a bit of money from the UN, but his funding was running out. One by one, the other refugees left, until he was alone after four months. He suspected it was due to his Turkmen ethnicity, and he pleaded his case at the UN office in Ankara repeatedly.

He also wasn’t making art at this time, so a connection in Istanbul introduced him to someone for whom he “ghost painted.” As Khurshid describes it, he painted while the other person simply wrote his name. He made some works for himself, though, like a piece depicting himself inside a key, symbolic because somebody else holds it, controlling his fate. He worked in Istanbul for two and a half years and tried to forget about his hopes of leaving as a refugee. Then he got a call from the UN.

“Iraqi people always joke [on the phone], ‘Hey, it’s the UN, we’re sending you to this country!’ So I thought it was a joke,” Kurshid says. “Then they called me a third time and gave me my case number, which nobody else knew, so I knew it was real.”

A week later, the UN told him he was going to Portland, Oregon, although he was somewhat conflicted about the news. He spoke the language and felt familiar with Turkish culture, but he disliked what he described as the imposition of religion on people’s lives.

“Honestly, it was hard to make a decision,” he explains.

But before he could leave, he had to spend a month in jail — for illegally living and working in Istanbul.

In November 2010, he boarded a flight to Portland, donning his blue International Organization for Migration badge. He saw Mt. Hood through the window just before landing — a good sign, he believed, as he had seen mountains like that in his dreams. Another omen: seeing an acquaintance from the Istanbul UN office in the Portland airport.

Two local organizations, IRCO and Catholic Charities, placed him and three others in a house, and one year later, he moved into his own apartment and art studio. He now paints, works at Target, and takes ESL classes at Portland Community College.

With the circumstances to finally make art on his own terms, he creates works portraying migration, corrupt politicians controlling society, different cultures living in harmony, and how culture, politics, and religion can make people forget each other’s humanity.

“All that has come to me in my life has been through my art. I’ve always followed my art. It started with painting Saddam, and then I broke the rules in Istanbul with art, and I’m here because of art. It’s always with me. My English is not enough, but people understand what I’m feeling and doing through my art,” Khurshid says.