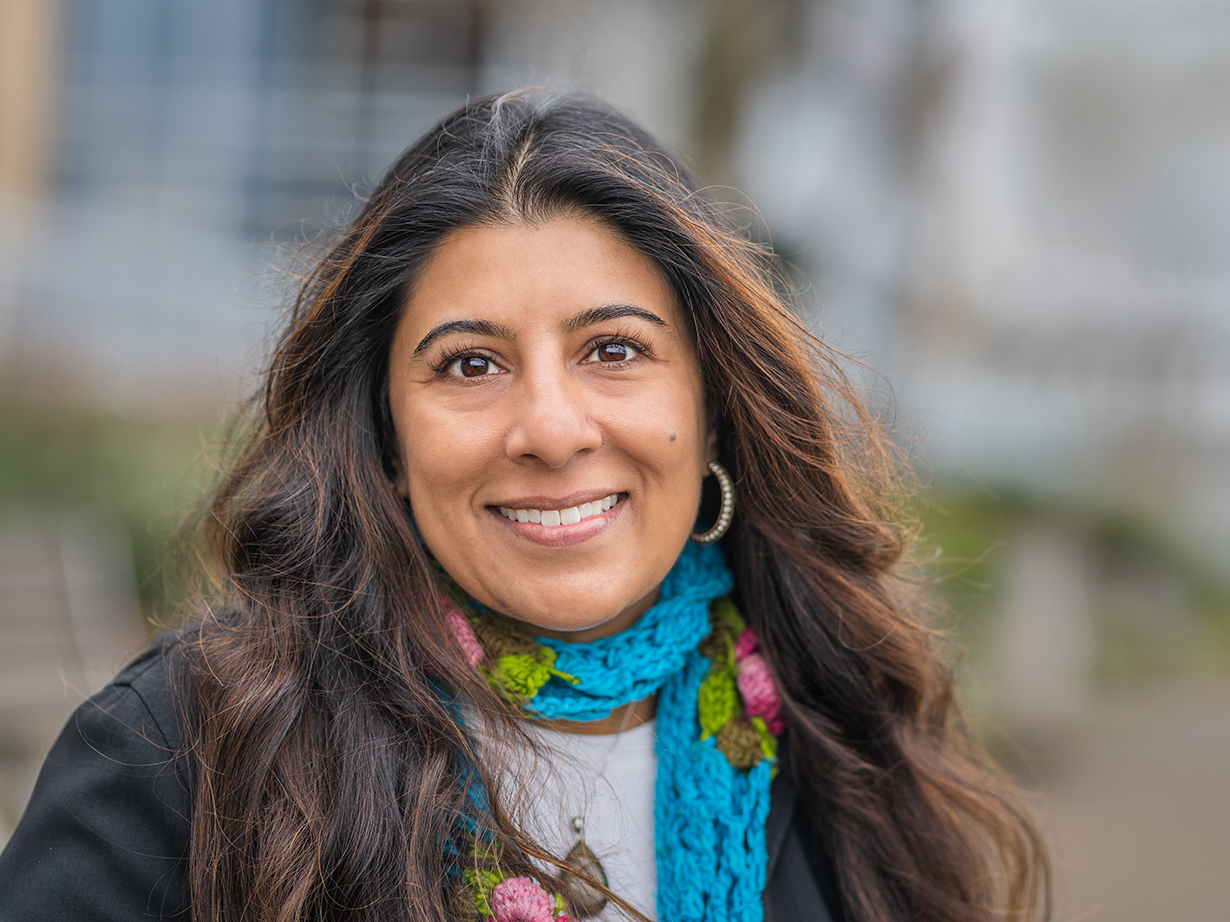 When Priti Gandhi was six years old, her mother noticed that she liked to hum along with the radio. She also observed that her daughter had a strong vocal pitch. So she signed Priti up for piano lessons and now takes full credit for Priti’s professional path.

“My mom likes to tell me that I have her to thank for my opera career now,” Priti says with a laugh. But she adds: “If they hadn’t enrolled me in piano lessons, I don’t know that there would have been a way for me to have the opera career that came later.”

Priti was just a baby when she immigrated to the U.S. from Mumbai with her parents in 1973. She grew up in Encinitas, Cal., not far from San Diego, and remembers listening to a lot of Indian bhajans, or devotional songs, at home. Her parents also loved Bollywood music.

“Opera was never on the radar,” Priti says. “It wasn’t something I really understood or knew about. That’s not a surprise. It’s not something that was popular in our community growing up. But because of piano lessons, I was playing Bach, Beethoven, Mozart on the piano and having that exposure, which I’m so grateful for.”

Outside of a rich tapestry of music, Priti didn’t have the happiest childhood.

“I was bullied in school,” Priti explains. “I was made fun of for my name, a lot. The kids gave me horrible nicknames. They couldn’t say ‘Priti.’ They would call me ‘Pretty,’ and as a result, my nickname became, ‘Pretty Ugly.’ And being an immigrant kid who was already not knowing what my identity was and I was extremely sensitive, it hurt me hard.”

The constant bullying – which started in first grade and continued through junior high – drove Priti to tears. To avoid teasing and humiliation on the playground and in the lunchroom she found a safe haven in the school library.

“Piano and books became my refuge,” she says.

Though her family was actively involved with the Indian community in San Diego, gathering for holidays and raas garbas, Priti struggled with her cultural identity.

Priti felt the expectations of being the first child in a highly educated immigrant household. “My mom has a master’s in economics and my dad is a double major in engineering. My two siblings are doctors,” Priti says. “My dad wanted me to be the lawyer.”

But Priti arrived at the University of San Diego in 1990 not yet knowing what she wanted to do with her life. Two years into college, a writing class sparked interest and Priti decided to pursue a path in communications and journalism.

Looking for a distraction from all the homework and papers, Priti found an old, out-of-tune piano in the dorms. But it sounded awful and she scarcely had time to practice.

“I need something musical in my life,” she remembers thinking. “I’ve always wanted to learn how to really sing, maybe I’ll just start taking voice lessons.”

One day, just a couple months into voice lessons, an observation from her instructor changed everything.

“She [the teacher] was taking me up these scales and I was singing extremely high,” Priti says. “And she looked at me and she said, ‘You have an operatic voice. Have you ever thought about studying opera?’”

Priti’s instructor gave her a famous aria to try. It was “O Mio Babbino Caro” (“Oh My Dear Daddy”) from “Gianni Schicchi,” a Puccini opera. The effect was immediate.

“I had an absolute kinesthetic reaction in my body,” Priti says. “I tell people it felt like a light switch had flipped on. I felt so happy all of a sudden. I had never had this feeling before in my life. Something in me woke up … it filled my body with this kind of joy and fire.”

Priti drove home that day desperate to learn more about opera. She cold-called the San Diego Opera, asked for the general director, and managed to get a meeting with him. He invited her back for an audition, but that tryout did not land Priti a role.

So after graduation, she got a job in the promotions department at a local radio station and continued to study opera in every spare moment she had – including lunch breaks. Priti’s efforts soon paid off and she secured a place in the San Diego Opera chorus.

She was elated. And there was no turning back.

“Oh my God, I’m on a stage singing opera in front of people who have paid to be here!” she remembers feeling. “This is incredible. I’m wearing a costume. I can’t believe I’m here.”

Her parents were in the audience the first time she sang in the chorus. The performance was Verdi’s “Aida,” and it was the first time they had seen a live opera.

Before long, she was taking to the main stage in San Diego as the third lady in Mozart’s “The Magic Flute.” “And I remember just being so thrilled that I got to do that,” Priti says. “So exciting to sing Mozart’s music in this incredible cast with a trio of women that were all harmonizing in this incredible way.”

In the early years of her performance career, Priti was so focused on making up for her lack of formal training that she initially took little notice of the bias surrounding her in the Eurocentric opera world. Germans, Italians and Austrians have composed the vast majority of widely performed operas. With the possible exception of “Otello,” most of these operas have traditionally not provided starring roles for people of color.

“The discrimination I felt later came more in the sense of going to auditions and having people feel very free to say to me, ‘Well, we really wanted a blonde for this role’ or, ‘Well, you’re never going to get cast in that because you’re not white,’” Priti says.

This not-at-all subtle discrimination began to wear on her.

“As years went on, then I started to understand, ‘wait a minute, my voice is perfect for this role,’ and opera is an art form about the voice and how it tells a story,” Priti says. “It shouldn’t matter what I look like. Shouldn’t matter that I’m brown. I should still be able to sing this role, especially in the traditional canon of opera – they were composing operas set in foreign lands; ‘Madame Butterfly,’ ‘The Pearl Fishers,’ ‘Aida.’ And casting white people in these roles. So why shouldn’t people of color get to be cast in roles that are meant for white people?”

More than a decade into her performance career, Priti’s star was rising. She had steady work in lead roles at top opera houses across the U.S. and Europe -– from the New York Philharmonic to the Los Angeles Opera to London’s Royal Opera House. Her lead roles included Musetta, from “La Boheme,” with the San Diego Opera, and Cio-Cio San in “Madame Butterfly,” with Opera Columbus.

Then, the 2008 recession came crashing in. With gigs quickly disappearing, Priti left New York to move in with her parents in San Diego, where she began a string of temp jobs to tide her over.

“And there I am, you know, in my late thirties, early forties, and I remember thinking, God, I feel like I’m not even an adult yet,” Priti says. “All my friends, siblings, cousins, marriages, mortgages, retirement plans, kids. None of those things were on my radar. I was still an artist trying to make a living.”

In 2013, as opera gigs were finally starting to pick up again, Priti got an unexpected call from the San Diego Opera inviting her to take over as artistic administrator. Priti’s first thought was to turn the job down – she wasn’t done singing and the thought of sitting behind a desk all day was not her idea of fun.

But she also saw the potential.

After five years in administration at San Diego Opera, Priti took over as chief artistic officer at the Minnesota Opera. This move brought her deeper into equity work and important conversations around diversity in the industry.

Following George Floyd’s murder, which happened just a few miles from Priti’s home and from the Minnesota Opera offices, a new sense of urgency and dialogue formed around making changes.

“We need to look at how we cast operas,” Priti says. “We need to look at what kind of commissions of new stories we want to do. We need to diversify the board. What does it mean? Equity work in our industry, even down to the language we use around the offices?”

But Priti also cautions that the pendulum can sometimes swing too far.

“I love the traditional repertoire,” Priti says. “I never want to stop listening to it or stop producing it. I don’t want to cancel it out. I don’t want to say we should never do ‘Madame Butterfly’ again because of the racist tropes, because I know there’s problems with ‘Madame Butterfly’ through the lens we have now. But I also know that I adore that music, Puccini’s music. I never want that to go away, but I also understand there’s a lot of problems right now with presenting Eurocentric white opera.”

Priti, who recently took over as Portland Opera’s artistic director, says it’s important to talk about these narratives and the problems they present now. And to cast diversely.

“I used to be someone who thought you can’t change anything. It’s a temple,” she says. “And now I’m saying, ‘Well, let’s change the narratives up. We want to get more people exposed to the beauty of this art form. And if it continues to look like something that is out of touch and out of reach, that’s not going to do any of us any good, it’s not going to keep our art form alive.’”

These are the challenges Priti and her colleagues face today, starting with: How to make opera relevant to a broader audience.

The goal is to get people from different communities and cultures to fall in love with the operatic art form, so they don’t feel intimidated or see it as a space reserved for rich white people.

“How are we going to break down those walls and say, ‘Come experience an opera, just try it.’?” Priti wonders. “How do we message our community and our city that opera is amazing and beautiful, and it’s a place where you can belong?”