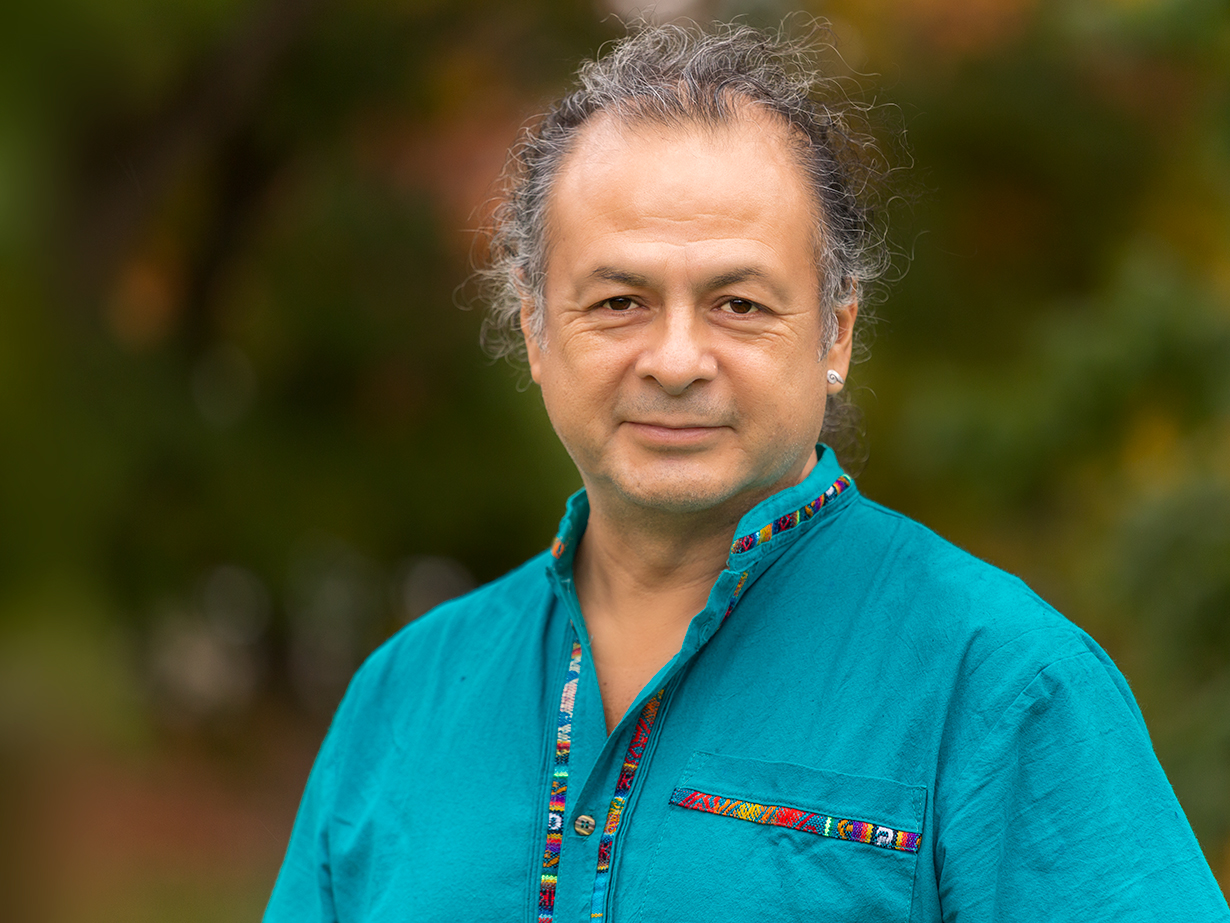 As he was relaxing on the beach at sunset, beer in hand, Gerardo Calderon Garcia was startled when a stranger approached. After a short conversation, the stranger remarked, “You know, there are people here to teach, and people here to learn. You are here to teach.” The comment stayed with Calderon, though, at the time, the college student had no plans beyond playing a musical gig at the nearby bar with his friends that evening.

Calderon was born in 1965 in Mexico City, the youngest of six. Music has always been part of his life.

“I grew up with music, dance, and singing,” he reminisces. “My dad had a beautiful voice, and he was a great dancer. My mom actually used to sing in bars when she was younger. My dad used to sing songs to my mom every day.”

In elementary school Calderon participated in a band with his brothers. For a couple of years, Calderon attended a music school in addition to his regular classes at school. After high school, he entered Universidad Autónoma Metropolitana in Mexico City, to study computer systems.

During his final year of college, he and some friends spent their spring break playing music in the tourist town of Puerto Vallarta.

“We didn’t have anything to eat, no money for gas, no money to stay in a hotel, nothing,” he remembers. “We were staying in my car.”

The group began playing at the restaurant on the beach for meals and tips. After three nights, they had earned enough to return to college in Mexico City. A few weeks later the manager called and offered the band a job playing at his restaurant daily. “I was almost done with school, but that moment was when I knew music was my thing.”

The group played in that restaurant for the next few years. “It was a great experience. I don’t regret quitting my degree and going after music,” he reflects. “I started my musical journey there in Puerto Vallarta.”

He mainly played guitar, but also started picking up other traditional stringed instruments and playing folk music from all over South America.

While in Puerto Vallarta, Calderon met his wife, Melissa, a woman from Oregon in Mexico on a student exchange. In 1988, they moved to Corvallis, Ore.

Several years later, after the first of their three daughters was born, the family moved back to Oregon. Soon Calderon joined Andanças, another Latin American music group based in Boston. This position took him on frequent travels, going to Boston to play and then touring around the country.

“It was great for me because that group was like going to school for me,” he says. “Whenever I met with them I learned a lot.”

After about five years with Andanças, Calderon and some other musicians formed their own group, Grupo Condor, based in Oregon.

“When I moved to the States, Latin American music was fairly new here, and that was great for us,” he explains “We went all over and played in big venues and festivals. But by the time Grupo Condor had been playing for about six years, there were many groups playing that kind of music and it was harder to get hired.”

After Grupo Condor dissolved, Calderon began teaching Latin American music, remembering what the stranger had told him on the beach many years before. He found that he loved teaching.

“I also studied music therapy in Oregon at Marylhurst University,” he says. “I was seeking to understand music in a different way. I like to teach people how to see music from the cultural perspective, not just the musical perspective.”

Marylhurst shut down before he graduated, but, for the second time, he realized a formal degree didn’t matter to him. “I wasn’t seeking a degree. I went to school because I wanted to learn.”

A few years ago Calderon bought a house in Zipolite, Mexico, and has been spending time there each year. “Being there in that beautiful town on the beach inspires me to compose.

“In Mexico right now there are a lot of great musicians coming out. So I want to take advantage of that and work with people,” he says. “I want to share what I know, and learn from other people. There are a lot of artists from all over the world living in Zipolite, so I’m writing a song about this town. I want to collaborate with some new musician friends and build a community there.”

One thought on “A Musician’s Education”