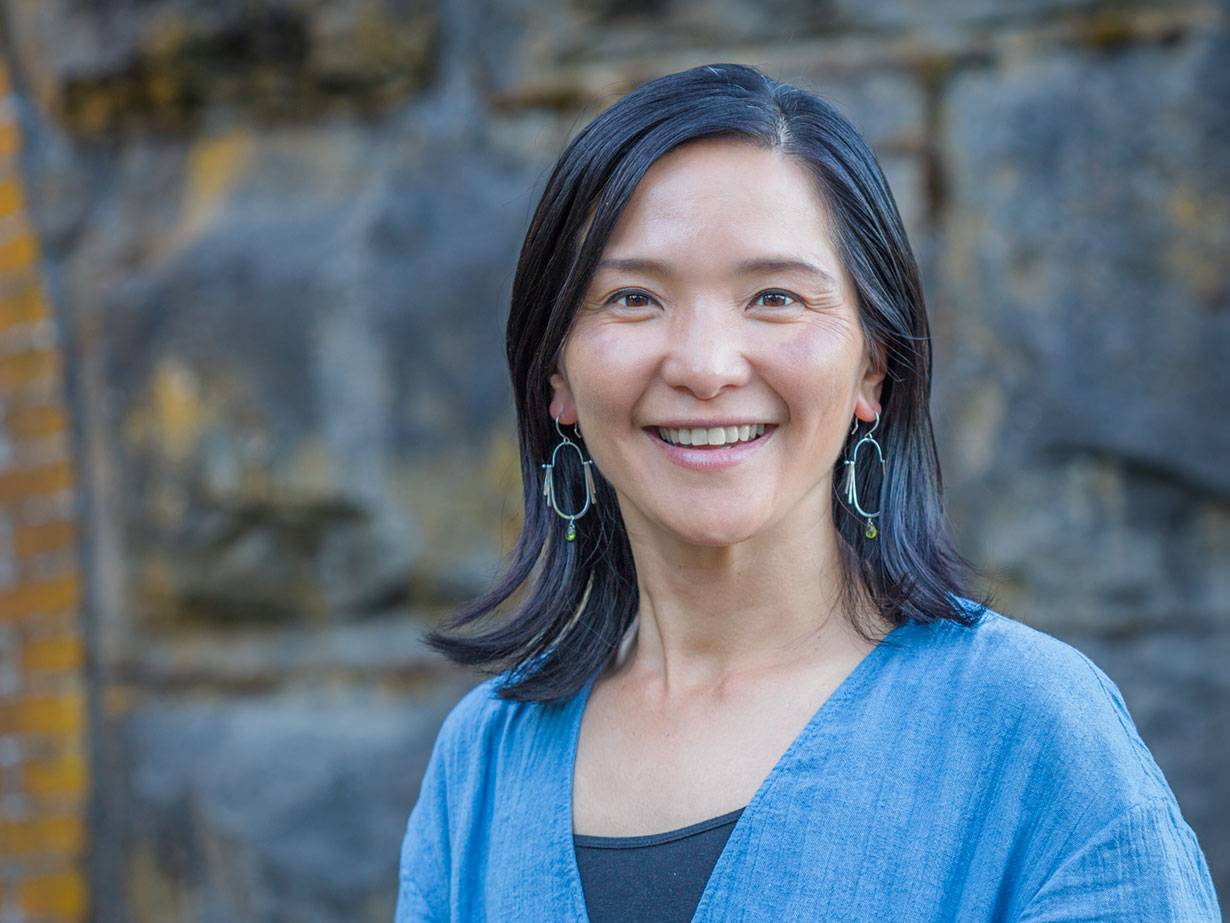 When her calligraphy teacher, Sekko Daigo, gave Rie O’Doherty the artistic name Sora, meaning universe or sky, it reminded her of her childhooddream of being a flight attendant.

“I realized,” she says, “I can still fly all over the world, maybe not as a flight attendant, not just on the surface, (but) maybe I can fly all over with a brush and my ink and my soul and my heart.”

Born in Usuki, Oita, Japan, in 1977, Sora was the youngest of four children. Her father was well known for his beautiful handwriting, and wrote Noshi, a type of origami used to attach thank you notes to gifts, in sumi ink.

“I remember the ink smell and the big brush. It was all very interesting to me,” she explains.

Like other Japanese children of her generation, Sora studied calligraphy, or shodo, in school, but as a child, art did not interest her. Her goal at the time was to be a flight attendant, a job that held the promise of a good salary and high status in Japan.

“I loved other countries, I loved people, and I loved the sky,” she remembers. “I wanted to fly all around the world. That was my dream.”

But the competition for flight-attendant jobs was stiff. In order to attain this highly sought after position, Sora needed to learn English and also do exceptionally well in school. At 15 she passed a test admitting her to an exchange student program in the United States, where she hoped to strengthen her English skills.

Sadly, Sora’s exchange student experience was not what she hoped for, as she faced both racial discrimination and cultural differences that resulted in her moving from one host family to another before finally staying with a Christian family in Daleville, Indiana.

“I was crying every day for three months, and then I just hit my limit, I think,” she remembers. “But the experience also made me strong.”

When she returned to Japan she swore she would never return to the U.S.,  and set her sights on being a flight attendant.

At 19 she left Oita for Tokyo, where she attended a junior college well known as a scouting ground for airline companies. There she met her future husband Bryan O’Doherty, a U.S. exchange student from the University of Oregon, who was studying in Japan for the year. When Sora told him she had landed her dream job as a stewardess at ANA Airlines, he challenged her and asked her why she would want to be a glorified waitress in the air.

“I thought, oh my gosh what is this person saying!” she remembers. “But that was some inspiration from him, to think about it differently.”

Being a flight attendant was a tough job, and Sora questioned whether it was the right path for her, but since it had always been her aspiration, she decided to try it out for four years.

“During that time I realized who I am, little by little. Maybe because I was dating an American, and being exposed to different cultures.” she says. “I wondered, why am I working for this status? Why does it matter?”

When Bryan graduated from the University of Oregon with a degree in architecture, he returned to Japan to teach English, in order to be nearer to Sora.

The two were married soon afterward, and had two weddings, an American one in Hawaii for her husband’s family, and a traditional Japanese wedding at an ANA hotel in Japan for Sora’s.

“That was another big dream,” she remembers, “I loved the fancy Japanese wedding, getting to wear a kimono and everything.”

The couple then moved to Portland, Ore., where Bryan had a job at an architecture company. Sora expected to do well in the U.S.; however, the status and recognition she gained as a flight attendant in Japan was not recognized, and the only job she could find was at a Starbucks.

“That was a really tough time for me,” she reflects.

In 2011 Sora, her husband and their three young children moved back to her hometown in Japan, where they lived for four years while her husband renovated a hundred-year-old house in the town.

“The whole community in my hometown was so happy to see the house when it was finished,” she says. “And that made me remember what was important in life.”

The family returned to Oregon in 2014, and Sora felt as if there was something missing in her life. “I was looking for a way to do something in this world,” she says.

Then she saw a beautiful Kanji drawing on the wall at a friend’s house, and was immediately reminded of her father’s brushes and sumi ink.

“When I saw the big brush my soul just said, yes! I want to do this! So I asked my friend to introduce me to the calligraphy teacher he knew. That was Sekko Daigo, who gave me my artistic name. She encouraged me to continue her work, as she was gradually retiring.”

Through shodo and performance art, Sora has found a way to connect to her own identity, as well as help others.

“I think my art is about mixing culture, not just shodo,” she says. “I want to express the way I just learned on the surface, all about status, not from the heart. And I want to change that for other Japanese kids.”

Sora’s art is both collective and personal. She paints traditional Japanese Kanji characters onto large canvases, creating spontaneous pieces inspired by the energies of a live audience and an accompanying musical performance.

Before each performance Sora meditates to clear her mind, in order to best channel the emotions of her audience, and then she writes whatever energy she feels in the room using a mixture of traditional shodo practices and performance art.

“When I got the name Sora, everything in my life changed,” she says. “All the experiences I had connected. All the people I met connected. When I had a brush and sumi ink in my hand, my soul just asked me to express.”

In the future Sora will continue her artistic process, and hopes to create public art in collaboration with the unhoused population in urban areas.