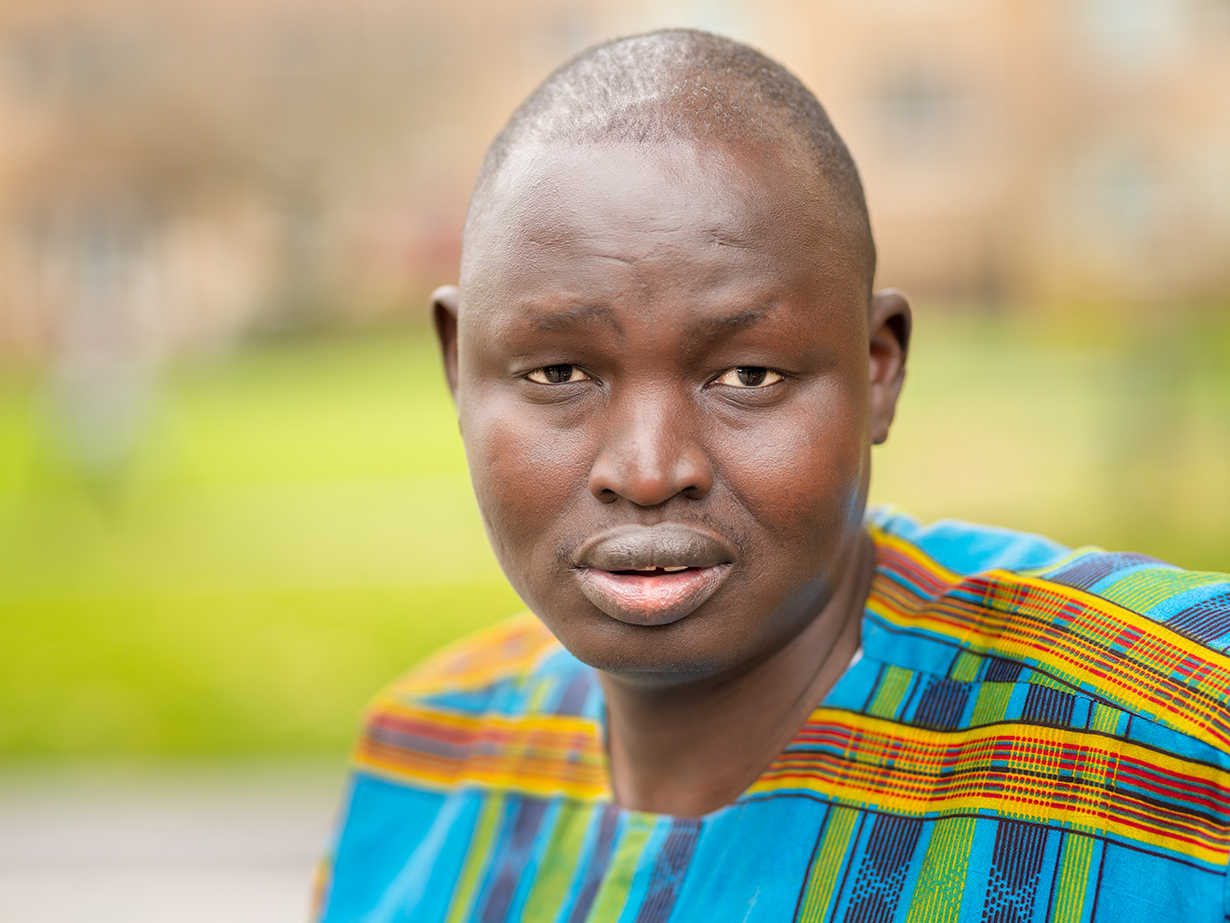 When your world is torn apart around you, you have to decide whether to give up or to keep going. Peter Magai Bul has had to make that decision a number of times.

He was born into the Dinka, the largest tribal group in South Sudan. Dinka life is based on cattle; wealth is measured in cows and even time is calculated by the needs of cattle. “I don’t know the exact date, but I know I was born in the dry season, when the cattle needed to be moved to a camp near water. So it was either December, 1981 or January, 1982,” he explains.

Peter was the youngest in a family of ten in the village of Wangulei. He would often accompany his father, who had been blinded in an accident, to community meetings. “Even so young, I was drawn to listening to those discussions,” he says. “I would choose to do that instead of playing. I believe hearing my father’s loving wisdom in those times gave me the strength to endure the later painful years without my family.”

The family had a large farm in the village, where they raised sorghum, and several cattle camps, where they kept their herds. In those days, children roamed freely from village to village, always part of the wider Dinka community. “Wherever we went,” Peter says,” people would take care of us and give us something to eat.”

When he was about five, he began to join the other village boys in caring for the cattle. Every year from December to May, the young people in all the villages would take the cattle to camps along the Nile River, where there was fresh grass year-round. It was a two-day walk, or about 30 miles away from Peter’s village.

At camp, the girls would milk the cows and exchange some of the milk for food at the nearest villages. The boys would tend the cattle and catch fish. “We all worked together,” Peter remembers. “We took care of the cattle and they took care of us. At night we would make a fire using dung and then sleep beside it surrounded by a circle of our cows.”

The Coming of War

Meanwhile, conflict was building between north and south Sudan over the discovery of oil in southern Sudan in 1979. At times southern troops from the Sudan People’s Liberation Army (SPLA) passed through the village and the local people had to donate food to feed them. Planes from northern forces would drop bombs in the area, sometimes killing villagers.

In December, 1987, when he was six years old, Peter went to cattle camp as usual. In May, the Nile flooded so he and his brother moved the family cattle to higher ground instead of returning home. When they finally headed home in December 1988, walking all day to get there, they had been gone from the village for almost a year.

But the very night they returned, their village was attacked. His parents decided that his father would stay there with the older brother while his mother would take Peter to a safe place.

Joining a large group of women and children, Peter and his mother walked for seven days, going from village to village, carrying blankets and food. “We tried to go to villages that were safe,” Peter recalls, “but it was impossible to get accurate news; everything was just rumor.”

After a week of wandering, the fleeing women and children met some soldiers, who advised the women to send the children to safety in Ethiopia and to return to take care of their cattle.

This advice, though hard to accept, made sense. The soldiers, who had trained in Ethiopia, described it as a safe place for the children and the adults knew they needed to stay with the herds, since that was their only resource for the future.

But Peter’s mother felt he was too young to go to Ethiopia alone, so she continued with the group toward the desert. Accompanied by the soldiers, they walked all night until noon the following day.

By then his mother’s legs had become so swollen that she could barely walk. Late that afternoon trucks arrived with supplies for the walkers and transportation for those who could not continue.

As she prepared to leave, Peter’s mother told him to stay with the children in his group and to be strong. “She reminded me how my father had always told me I had to take care of myself,” he says.

Food was being served and Peter had had little to eat for several days, but he could hardly get the food down as he watched his mother climb onto the truck.

Then he decided he could do it.

“I told myself that this was like the cattle camp,” he says. “It was like those separations and I could do it, just like I used to take care of myself in the camp.”

He forced himself to eat and then rested in the shade with the others. That afternoon, they began the pattern they would follow for most of their journey; they rested out of sight till it was dark, then walked all night. In the morning, they would stop and cook, then hide again all day. Walking by day was too hot and also too dangerous because they could be spotted by enemy planes and bombed.

The children, mostly boys and some girls, were between five and twelve years old. They were accompanied by a few soldiers, who led the way. From Peter’s community there were about 700, walking together in three sub-groups. “We stayed together with the others from our own villages,” Peter explains. “The older ones would watch after the rest in the group.”

As they walked hour after hour, some children would become exhausted and lie down to rest in the grass beside the path. If they were discovered, the others would rouse them up to continue. But, if no one noticed them, they got left behind and died there. Others would wander off the path into the tall grass, sometimes higher than their heads, and become lost. Some died of starvation, wounds, sickness or animal attacks and the survivors would have to bury them.

At the end of each night’s walk, Peter’s job was to count who was still there and to distribute food. “These jobs helped keep me focused, “ he says. “And remembering how my father helped people settle disputes helped me make the decisions that had to be made.”

As they rested during the day, the children would discuss with each other, “Which is better, to lie down and die, or keep trying?”

“Each time I’d tell myself that I would just keep going for now, until I couldn’t do it anymore,” Peter remembers.

Altogether, an estimated 20,000 children, who came to be known as the Lost Boys and Girls of Sudan, made the trek from southern Sudan to Ethiopia.

When the children arrived at the border with Ethiopia, they were divided into two groups. Peter was among those sent to Dima, a further five-day walk. They had to cross the Gilo River but, fortunately, it was low and they were able to walk across.

When the SPLA came to Dima, the boys all hoped to be recruited. Back in Sudan, they thought, they would have a better chance of finding their parents. But only those over twelve were selected and given real guns. “I was tall for my age,” says Peter, “so I tried putting on extra clothes to look older.”

To his disappointment he wasn’t chosen and had to remain in camp and attend school, where they learned Arabic.

In 1991, the civil war in Ethiopia reached Dima, so the boys left and headed back toward Sudan. This time the Gilo River was in flood. “Our biggest fear was the water itself, dark and swirling and known to harbor huge crocodiles,” Peter remembers. “But the soldiers were approaching behind us so we had to choose.”

Many of the boys drowned there, some were shot by the soldiers chasing them, and others hid in the bushes planning to make the crossing later. Peter decided to keep going and make the crossing at once. He clung to the rope stretched across the water and made it just as the water began to rise to even more dangerous levels.

The survivors of the river crossing made it back to Sudan, and camped near the border, hunting and digging up wild foods to feed themselves. When the fighting got closer, the boys started walking again, heading east. Red Cross trucks ferried the boys at times, usually just taking each group for a few miles and then returning for another group, so most of the trip was on foot.

They finally arrived at Kakuma, a refugee camp that had just been opened to accommodate them in the desert in Kenya. The camp has grown into one of the largest refugee camps in the world, including people from Somalia, Rwanda and all over sub-Saharan Africa. Its current population is estimated at 190,000.

Just as they had done throughout their long journey, on the walk, in Dima and on the riverbank, the boys organized themselves into a community in Kakuma. “This is how we survived,” Peter says, “By creating our community to support each other. Each of us knew he was not alone.”

Peter lived at Kakuma from 1992 to 2001 until he was 19, attending school there. He became one of the leaders of the 12,000 Sudanese boys in the camp. When the U.S. announced that it would take 4000 of the Sudanese, he decided to try for one of the slots and was selected to go to Chicago.

“I had spent a lot of time creating community in Kakuma and I knew that, if I left, some of the others might have a hard time,” Peter says, “But finally I decided to take the opportunity and go.”

Just before he left the camp, Peter and his brother who was stationed in the army at the border of Ethiopia, met for one last visit. They sat up all night catching up on all the family news. Many years would pass before they would meet again.

Arriving in the U.S.

Along with the others who were over 18, Peter was sent to Chicago and given an apartment plus money for living expenses for three months. Once again, the young men were facing a survival situation; this time, they needed to create new identities in an urban environment with unfamiliar expectations.

And once again, they survived through community, supporting each other as they attended local colleges and found jobs, and establishing a Sudanese Community Center in Chicago.

Peter wanted to go directly into college, although his counselors advised taking more ESL classes first. But, following the strategy that had worked so long for him, he said, “Why not just try and maybe I will get in.” He was accepted and earned a BA in political science.

After he became a U.S. citizen in 2007, he returned to his village in Sudan and, at last, saw his family again. With others from his village, he founded a school in Wangulei; it has eight grades and equal numbers of boys and girls.

“No one wants to leave their country,” he says. “It is always a terrible decision to leave everything behind you. As an American myself, I want to live in a country where those who need help are welcome. Political leaders can always divide people so we all have to be aware of what we can do as individuals to educate each other.”