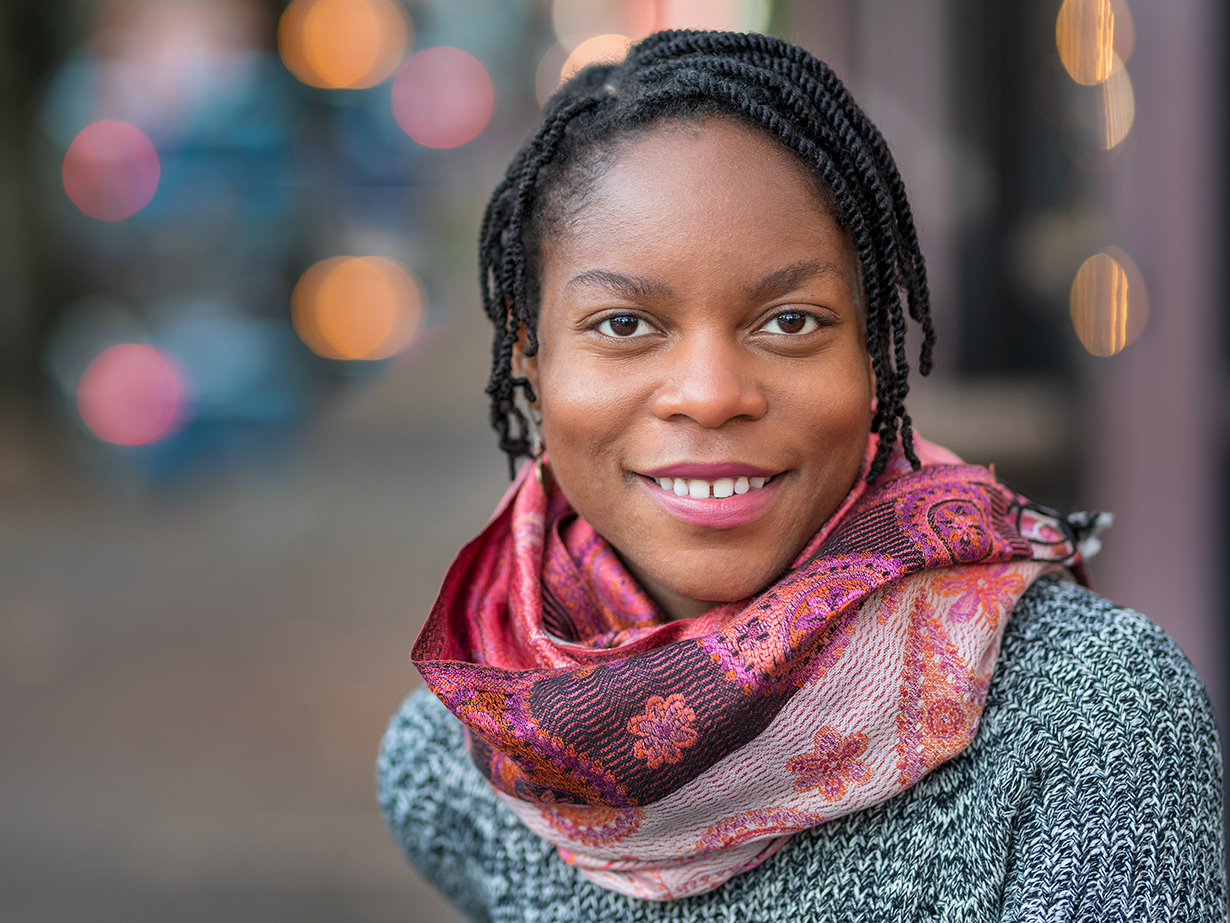 When Onyeka Azike journeyed from Nigeria to America to attend Portland’s Reed College, she believed she would fulfill a childhood dream.

She expected that she would benefit from a consistent education uninterrupted by teacher strikes, and she wouldn’t have to struggle with the daily hassles of pollution and loss of electricity in her hometown, Lagos–the most populous city not only in Nigeria, but in all of Africa.

But never did she expect that peers, strangers and even friends in America would be so preoccupied with her accent and skin color.

And so her dream of benefiting from life in the U.S. became a slow, subconscious effort to fit in by changing her accent.

Fitting in wasn’t on Azike’s mind as a child growing up in Nigeria, she says. She was unaware of her–or others’–skin color or accent. She remembers spending family holidays playing with cousins. Her mom, a chemistry professor, and dad, the owner of a skin-care business, like many middle-class families, had “house helps,” maids and security guards.

But even though the family was solidly middle class, Azike and her family were plagued by resource shortages and pollution from cars.

“My dream of going to America came from watching American [TV] shows,” she says. “I wanted to go to a good school and graduate in four years and live in a comfortable place.”

In 2006, Reed College awarded the 17-year-old a large enough scholarship to begin life in the U.S.

As soon as she arrived, her dream of America and the reality of life in the U.S. began to clash.

“I would try to talk to someone and all communication would stop. People would ask stupid and ignorant questions,” she says. Some people even corrected her pronunciation.

Worse, some Americans seemed to equate her foreign accent with stupidity. Close to 500 languages are spoken in Nigeria, but the official language of the former British colony is English. Azike grew up speaking English.

In the U.S., she discovered, “Somehow the ability to speak English was connected to how smart you were.” The Nigerian cadence of her spoken English placed her at the lower end of a perceived intelligence hierarchy, Azike says. British, American and Australian accents meant you were smart.

Slowly, Azike began to imitate the American accent of those around her. But she wasn’t aware of just how much she had changed the way she spoke until she traveled to Nigeria as a sophomore. During her visit, her mom had a hard time understanding her. And when she tried to buy a scarf at a market, the scarf vendor didn’t understand her at all.

“It was heartbreaking to be in Nigeria and not be perfectly understood. I had to repeat myself over and over again in both Nigeria and the U.S.”

After graduating from Reed, Azike began a job as a market research analyst at Nike. She married her husband, Brendan Jones, in 2016, and changed her name from Azike to Jones.

Not only did she struggle with the American reaction to her accent; she grappled with how people treated her because of her skin color.

During a recent visit to Walgreen’s with her husband, Azike-Jones tried to buy a gift card with a credit card, and the store employee rejected her request. Her husband then tried to pay for it with his credit card, and experienced no resistance.

Brendan Jones had to explain to his befuddled wife that racial injustice was at play.

Often, people assume the pair is not a couple because of their different skin colors–even if they’re being openly affectionate. For example, after her husband offered two tickets while boarding a bus with Azike-Jones, the driver assumed the second ticket was not for her.

“Their biases affect their common sense,” she says.

Sometimes, even her husband has trouble understanding her struggles.

“My husband and I argue about my accent. My accent is like a mask I wear all the time,” she says. “The more comfortable I feel with him, the more Nigerian my accent becomes, but then he has trouble understanding me.”

More and more, Azike-Jones has begun removing the mask and embracing her Nigerian accent.

“Before, I wanted  people to just forget that I’m not American. But now I don’t care.”

While she doesn’t care anymore what people think of her accent, she does care about how her future children will be treated. Azike-Jones and her husband want to find a place where skin colors and accents aren’t important.

And like the child who dreamed of America, she’s searching again, this time not for comfort and education, but for a home where she and her kids won’t need to wear masks to fit in.