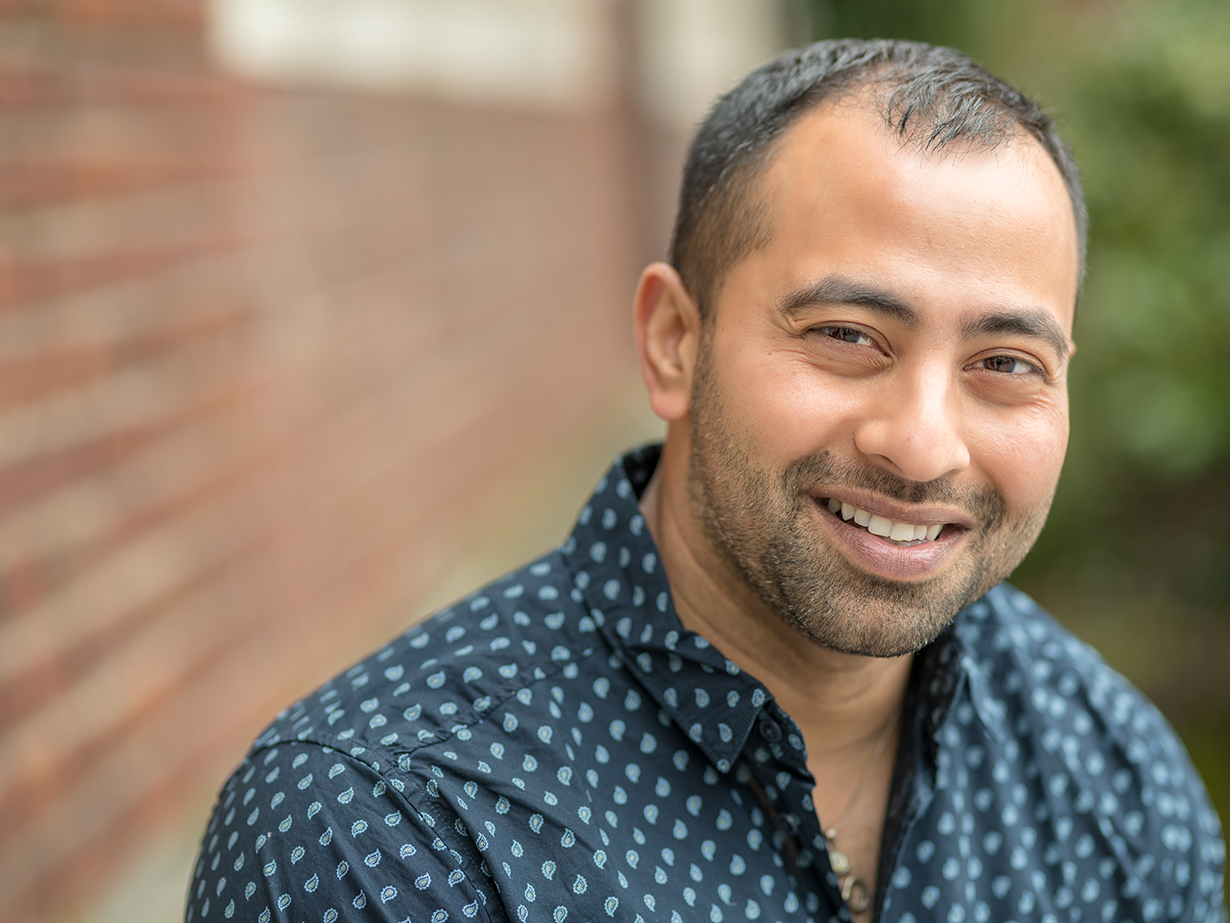 Not many men would invite their ex-fiancée to their wedding, but Vikram Srinivasan invited his. After all, she was his best friend in high school and stood by him when he came out as gay. She was the only “family” from India present when Vikram exchanged vows with his partner in a backyard ceremony in Portland in 2015.

As an immigrant from a country which did not decriminalize homosexuality until 2018, Vikram struggles to balance culture and identity. “Be true to yourself, and if you believe in that, the path will come.” he says.

Vikram was born in 1981 in Chennai, India. As a member of the Brahmin caste who grew up in a close-knit family of engineers, he was expected to follow suit. With fierce competition to get accepted to an engineering school, the pressure was on. Vikram got up early to take extra classes, worked hard, and excelled in all subjects. He loved language and writing the most. “Communicating an idea, emotion, thought, or experience through any expressive medium – a play, symphony, or poetry—that is so beautiful and powerful,” he says.

At 16,  he proposed to his best friend in high school, but then he panicked and called off the proposal. She felt devastated and confused.

A mutual friend became their mediator and spent several hours talking to them in private. That is when Vikram realized he was falling in love again, only this time with the friend. He understood the love he felt for his girlfriend was platonic but he felt something much stronger for their friend.

When they graduated from high school, Vikram realized he was gay. In college, he came out to  his old girlfriend.“I didn’t know how I was going to live my life as a gay man but I knew I could never marry a woman in deceit, especially my best friend,” he  admits There were several incidents at home when his family found out about his sexuality. But the reaction was always the same: disgust, rage, or total silence.“We never talk about difficult emotions in our culture,” Vikram explains.

With time , his best friend overcame her anger and awkwardness. Their friendship re-blossomed and  he soon came out to all of his close friends. After graduating with a bachelor’s in electrical engineering, Vikram got a scholarship to the University of Cincinnati, where he earned his Masters degree. In 2006, he moved to Portland OR for his first job.

The anonymity that comes with living in a new city gave him the courage to join the Portland Gay Men’s Chorus. “I stepped into the rehearsal space, and a hundred men stared at me. I thought, ‘Oh God, What have I done?’” he chuckles.

He soon learned that he had not just perfect pitch, but supportive friends as well. “Joining the chorus gave me the community and family I was seeking. Family doesn’t always have to be the one you are born into.”, he says. In 2012,  about to move to a better job in Boston, Vikram met a handsome man. “It was blissful—I forgot about reality, that our time was short-lived.” he recalls. “We were falling in love.”

Vikram was willing to try long distance, but is boyfriend was not. They broke up, but reunited after Vikram’s job relocated him to India. He was able to return to the U.S. with a job in Boston and  the couple got married on a hot summer day in 2015, a few days after the Supreme Court ruled in favor of gay marriage. “I daresay I may be one of the first Indians to have a same-sex wedding in USA.”, remarks Vikram. The wedding was an intimate summer ceremony, with seven vows and Sanskrit songs. His best friend from high school flew in and their closest friends filled the backyard.

Today, Vikram works at a hi-tech firm in Portland and is completing his 10th year with the chorus. His family  has not fully accepted him for who he is or recognized his marriage. However, his friends, community in Portland, and a strong sense of self sustain him.

Vikram still doesn’t read music, but doesn’t need to. In a way, he approaches life like singing: There is no written manual for his experience, so he trusts himself, and shares that with the world.

One thought on “Listen When the Heart Sings”