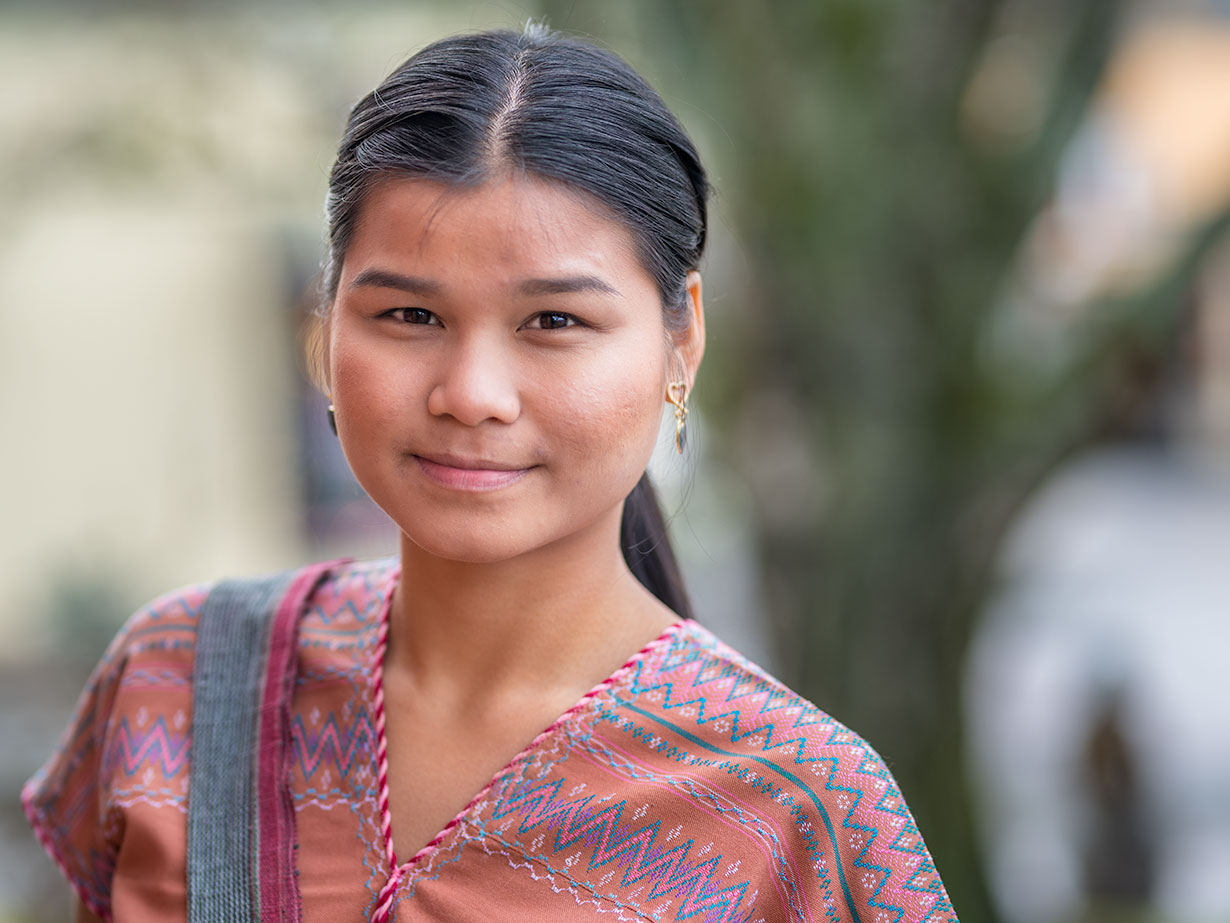 “I’m never going to get out of this place,” AyeChan May thought as a young teenager. In Mae Ra Moe refugee camp in Thailand where she grew up, she saw the way her parents’ lives had stalled and expected the same for herself. “They ran out of opportunity,” she explained.

AyeChan was born in Mae Ra Moe in 1998, as the fourth of eight siblings. Two of her older siblings had been born in Burma, and her mother was pregnant with her brother when the family left that country.

Her parents had fled Burma (now known as Myanmar), as military force there terrorized minority groups, and May and her family are Buddhist Karens. They had tried to rebuild in several places around Burma, but finally crossed the border to be safe.

She and her family members couldn’t leave the camp, where they lived in a small bamboo house that was “like living in a prison.”
The sense of an empty future carried over to May’s schoolwork. As a kid, she believed the school there didn’t teach anything really useful, but she feared having teachers hit her hand with a stick as punishment for being absent.

Gathering food was a different story. May’s family cultivated mangos, bamboo, bananas, and sweet potatoes in a backyard. She had more of an incentive to pick food than to go to school. “[Picking’s] not your job,” she says, “but when you see your parents and older siblings suffer from doing that, you kind of have to do it too.”

May would also walk with her friends to pick food on the weekends, gathering fruits and vegetables until their baskets were full. She would even climb mango trees to reach the fruit, carrying ash with her to kill the vicious ants hidden in the branches. “If you want something,” she notes, “you forget about what’s good and bad; you just go and do it.”

Everything changed when May learned she’d finally get to pass through the camp’s gates, to emigrate to Oregon. Her entire perspective on schooling shifted with the realization that, after she graduated from school in the U.S., she’d actually get to work and be able to make money. As soon as she envisioned this meaningful future, May went directly to her teacher in the camp, declaring, “Nope, I’m not going to school [here] anymore.”

And, as with climbing mango trees, she didn’t dwell on the good and the bad of the coming move; she just went.
May’s family took the long journey to the U.S., ending up in a house in Gresham, Oregon. They slept during the day and learned to cook at night, afraid of leaving the house because of what they’d heard about violence — such as kidnapping — in America.

Entering 6th grade came with challenges of learning English and making new friends. However, May was eager to explore her new home. “Trying new things is always part of me,” she says. “I got up early to get ready in the morning. I was so excited,” she remembers from her first day at Parkrose Middle School in the U.S.. “I’d wait for the bus like an hour before, and there were people who would roll up at the last minute.”

At first, she says, “my goal was just to learn English. But when I started high school, I realized that everybody’s talking about their career.”

In 11th grade, May — a girl with dark hair and a reassuring smile — began shadowing in different professions. She decided dentistry was a good fit. She saw this career path as a way to give back to her community with a useful skill. She reflected on how older members of the Karen community often chewed betel nuts, which discolor teeth and can endanger oral health. “In their concept of healthcare,” she says, “their mouth is separate from their head.” May’s goal is to support dental hygiene as an important part of healthcare, by starting as a dental hygienist and then later studying dentistry. She currently attends Mount Hood Community College.

Years after her aimless time in Mae Ra Moe, May is working towards her long-term goal of becoming a dentist. In fact, her advice to others is this: to have a “reachable hope,” and to “work hard wherever you’re at. You never know when luck’s going to pick you up — you’re not going to know what the future holds.”

2 thoughts on “Learning to See a Future”