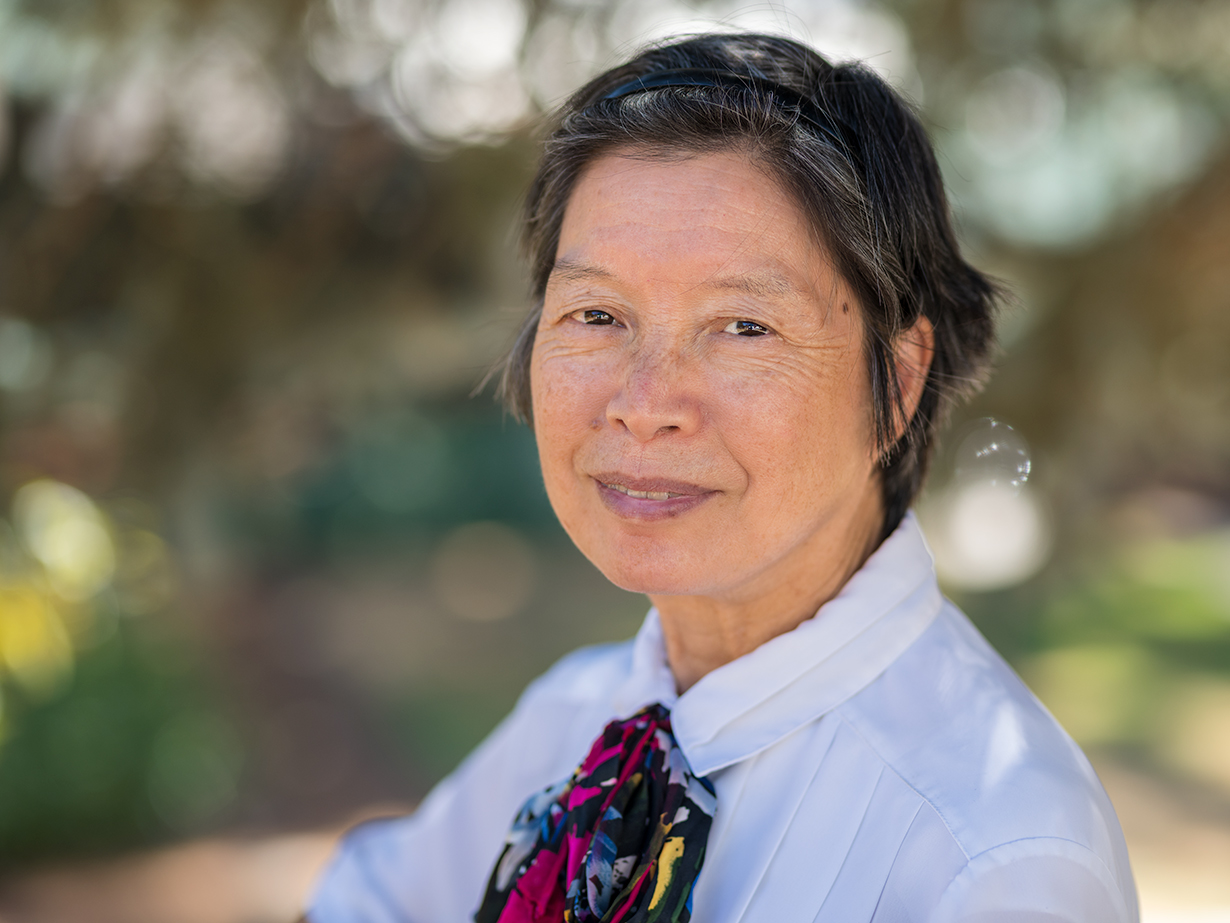 Janet Liu is no stranger to a life shaped by history. Or rather, a history shaped by her life. But her rolling laughter and raw honesty reveal that she remains spry and young at heart to this day.

Born in 1951 to parents who fled the mass killings of landlords in communist China, Janet never felt at home in her birthplace of Taipei, Taiwan.

“Taiwan was just 10 years,” she says, although memories of life on the island remain: the taste of sweet sugarcane, for instance. Or lunchtime naps. Janet still remembers how some schoolchildren had holes in their shoes where their toes poked through.

Her father moved to Bloomington, Indiana, when she was 4 to work on a Ph.D. in nuclear physics. While waiting for permission to emigrate, Janet’s mother worked as an accountant and hired a caretaker for Janet and her little brother.

At that time, under the Magnuson Act (also known as the Chinese Exclusion Repeal Act), only 105 Chinese people were allowed into the United States each year.

“My father did not accept this situation,” Janet explained to a live audience in Portland, through the Portland Storytellers’ Guild in 2013. “He got together with other Chinese scientists and other professionals who (had) family in Taiwan. They approached (then-Attorney General) Robert Kennedy to ask him to help alleviate the hardship of being separated from their families.”

It worked. An executive order issued by his brother, President John F. Kennedy, allowed her family to fly to the U.S. in 1961, when Janet was 10.

Life in the Midwest meant snowy winters and a new language. Mostly it meant finally having a dad to look up to. After dinner, Janet’s father would put aside his work to help her with math homework.

“I know what a great gift that was,” Janet says. “A lot of people don’t have fathers like that.”

However, just a few months after becoming professor in Oklahoma, Janet’s father died unexpectedly. She’d only gotten to know him for a few years.

The loss spelled uncertainty for her family’s immigration status. Janet used her English-language skills to translate deportation notices for her mother, at a time when most kids her age were reading comic books and magazines.

Eventually, Janet’s mother moved them to California to be closer to family. In 1968, they gained legal U.S. residency.

Janet graduated high school early and went to San Jose State University to study math; she eventually transferred to the University of California, Berkeley. She remembers exiting the library, her eyes stinging from tear gas that the police had released on student protesters there.

“I was very intent on studying,” Janet says. “I had to relieve my mom, she had worked hard.”

Janet worked harder still, graduating at age 20. She bought a house with her mother and became a computer programmer.

It was the 1970s, and she was one of few women programmers of that time.

“I was okay with it,” Janet recalls. “When I was taking math in college, I was often the only woman in my math class. I ignored the counselor. I ignored the boys.”

Janet started making money to support herself and her family.

“It was freedom,” she says.

But following layoffs of noncitizens at her company, she knew she needed to make herself more employable. So she got her Master of Business Administration in Finance. She also invested in real estate, and got a job in Silicon Valley.

Janet found power in having financial control after years of precarity — and still does today. She laughs as she reveals that she owns the complex of which her own modest condo is a part.

She later married, had a daughter and moved to Lake Oswego, Oregon.

Janet’s husband was violent, and after 12 years, she found the strength to leave the situation.

“My mother died and her death caused me to go through some thinking,” Janet says. “I realized that life is short and sometimes you have to make hard decisions.”

Today, Janet lives in Beaverton, Oregon. She loves to bike and ski, to play her piano and volunteer. She loves to laugh loudly and tell stories. She is patiently awaiting her daughter’s return to Oregon from Hawaii, where she works in the Navy as a dentist.

“I understand the hardships I’ve gone through,” Janet says. “I think I’ve paid my tuition.”

As a treat, she says she’ll be trying out business-class flying for the first time during her next trip to Taiwan.

“Twelve-hour flights are hard on the body these days,” Janet says with a laugh.