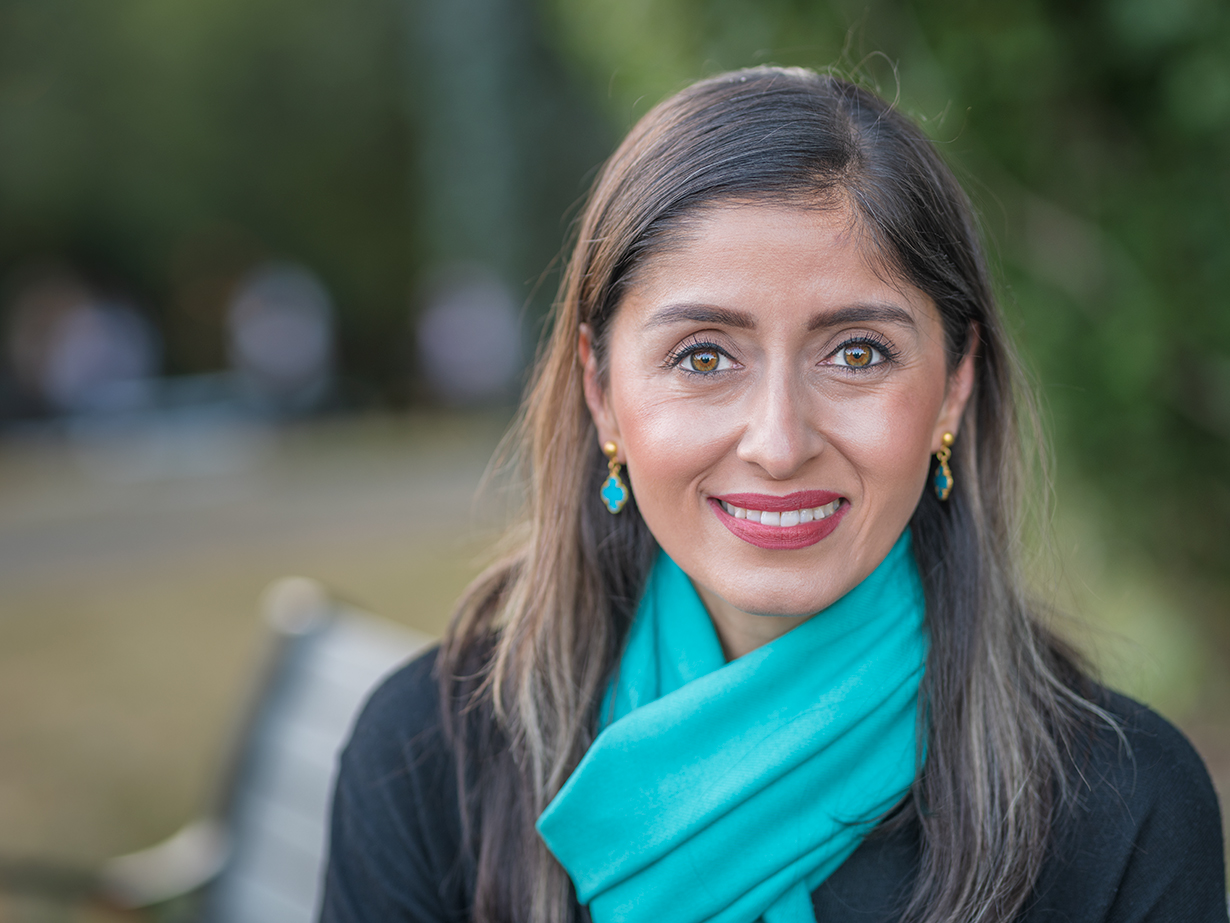 Looking back on the many changes in her life, Sara Houranpay likes to quote her father’s advice: “When life throws you down, you get up,  dust yourself off, and keep on trucking. You have no other choice.”

Houranpay and her twin sister were born in Tehran, Iran, on Sept. 11, 1978– just three days after the regime led by Ruhollah Khomeini imposed martial law on Iran.

“I was a child of revolution,” she says, alluding to the Islamic Revolution in 1978 and explaining that her parents were devoted to the cause of Iranian nationalism.

As a child in Tehran, Houranpay was close to her extended family. “I couldn’t tell where our lunch or dinner table started or where it ended,” she says. “There was never a table long enough for all of us, so we would always sit on the floor to fit everyone in.”

During the Iran-Iraq War (1980-1988), her grandmother had a unique way of making the young children in the family feel safe.

“She would always have meals prepared and she would feed us with her hands,” she remembers. “She was just keeping us busy so we didn’t think about the fact that there were bombs going off and people being killed right outside our bunker.”

Houranpay’s father had held a position in the government of the final Shah of Iran, Mohammad Reza Shah Pahlavi. By 1985, this connection forced the family to leave Iran in a hurry.

“That’s something I remember like it was yesterday,” says Houranpay. “My father got word that someone that he used to work with had gotten captured and tortured for names and that one of the names given was his.”

Houranpay’s family emigrated to Germany, and then the United States, settling in Portland, where relatives were living.

Houranpay was only 7 years old and missed her life and extended family in Iran. “My father’s cousin had a Christmas tree with decorations hung with fancy fringes,” she remembers. “I saved all of those decorations in a Ziploc bag because I thought that, someday, my family would come to the States, and I could greet them at the airport and throw those decorations up in the air.”

At that time, few Iranians lived in Portland. At school in Gresham, Houranpay and her sister frequently faced bullying from classmates. She recalls one incident in particular when her father taught her a valuable lesson.

“One day, a classmate said to me, ‘You’re Saddam Hussein’s mistress.’ and I said ‘Go learn your geography. Saddam Hussein lives in Iraq. I’m Iranian.’ I remember that I got so mad I pushed him, and when he fell to the floor I just kept kicking him in his arm over and over again.”

That incident got her father called to the school principal’s office.

“I remember leaving the principal’s office,” she says,  “And my father saying, ‘You shouldn’t be angry. You should feel sorry for this little kid who’s being raised in that environment.’ As an adult and parent looking back now, he was right. [That boy] was a product of his environment.”

Soon after, the family relocated to Portland to open a restaurant called Persian House, which specialized in Iranian cuisine. Houranpay’s grandmother suggested that she and her sister return to Iran to stay with their grandparents for a short time while their parents got the new restaurant going. So in 1991, at 13 years old, Houranpay and her sister went back to Iran.

Barely had they stepped off the plane before airport officials confiscated the twins’ passports and temporarily detained them because of their father’s position in the Shah’s government.

“That’s when we found out that my father was blacklisted,” says Houranpay. “He had just planned to send me and my sister to Iran for the summer but [the Iranian government] saw an opportunity to get my father back in Iran by holding us.”

The twins remained in Iran for five years, often feeling like outsiders, yet also growing close to their extended family and absorbing family values.

“Now, looking back at it, it was probably one of the best experiences of my life,” she says. “Now, I am able to pass down the language and the culture to my kids, which, if I didn’t live there all of those years, I couldn’t.”

The twins returned to the United States in 1996. Besides helping out in the family restaurant, Houranpay went to college and then dental school, becoming a dental hygienist.

“Working in hygiene fits me in many ways,” she explains. “You form close bonds with your patients, which just fits with my personality.”

Sadly, Persian House was a casualty of the COVID-19 pandemic. But Houranpay still feels connected to the community that came to eat at Persian House until the day it closed in 2021.

“The majority of our customers were Americans whom my parents introduced to Persian food and they fell in love with the culture,” she says. “Over the years, some of them even learned Farsi. It really showed the effects that different cultures had on each other. I still invite some of our longtime customers over for dinner.”