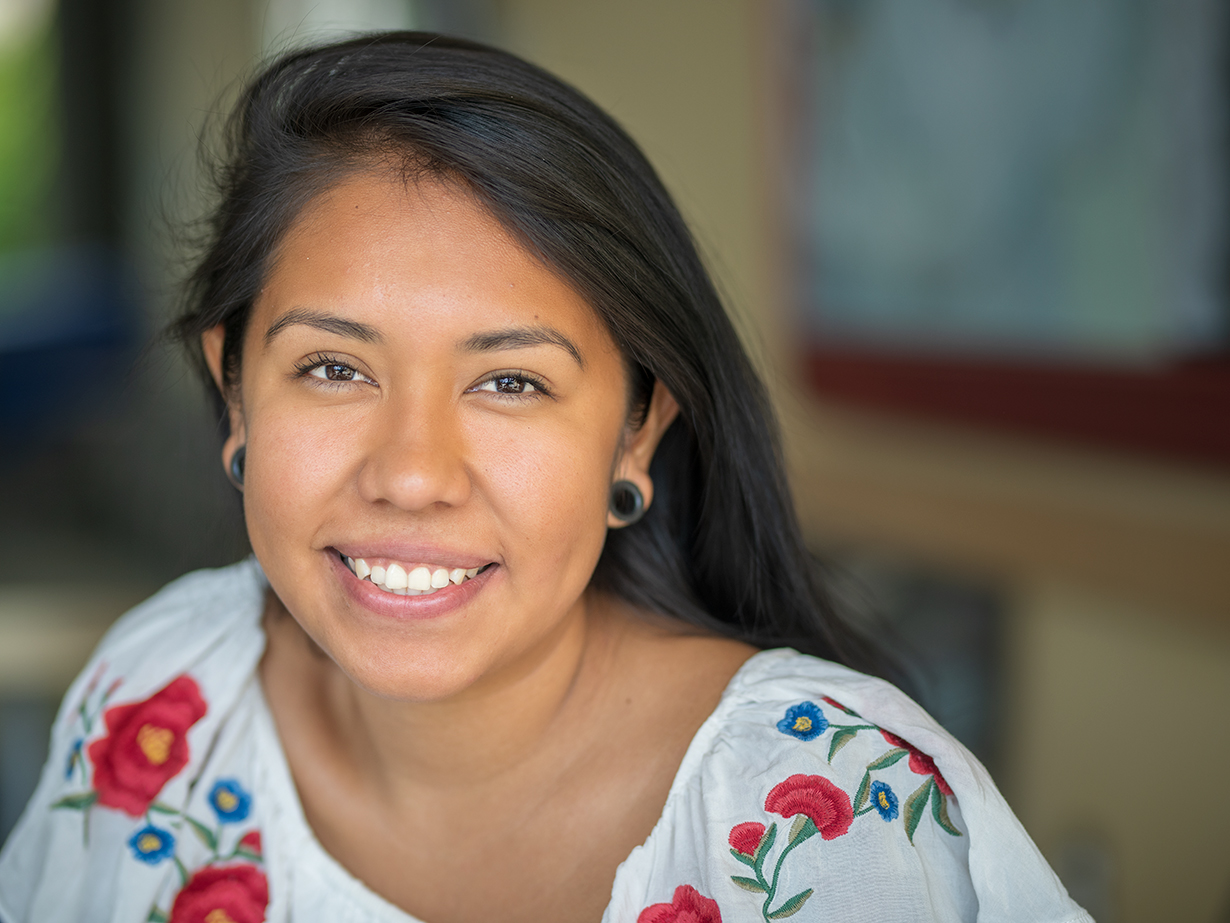 With this admission, Liliana Luna saw her chances for college slip away. The high school counselor who was advising her suddenly gathered the forms for her college applications and returned them to his filing cabinet. “I don’t understand,” he said. “Don’t you have a green card?’

She had only two options, he told her: return to Mexico and re-enter the US with a student visa, or work at a Mexican restaurant in the Portland, Oregon area.

It wasn’t what her parents had told her to strive for, but Luna figured that, as a white man, her counselor must know better. So right after high school, she began a job taking orders and making salsa.

However, her intuition alerted her that this new role wasn’t right, and she changed paths, eventually becoming an advocate for undocumented immigrants’ rights. Luna, who is now PCC Rock Creek’s Retention and Multicultural Center coordinator, a marriage and family therapist, and an activist, was born in Mexico City in 1990. She describes always inhabiting two roles: caring for and leading people, starting with her brothers.

During Luna’s childhood, she moved frequently. Because of these moves, she grew up far from her extended family, and she lived with her parents and two brothers. Not growing up in what Luna characterized as the stereotypical big Mexican family bonded the five closely. When she was nine years old, her father, a bus driver, moved to the southwestern Mexican state of Michoacán for work. Luna recalls being physically ill for a month due to sadness. Eventually, the family joined him in Michoacán, the first of many moves.

Of Michoacán, she remembers time spent outside among mango, banana and papaya trees, a house her dad built out of aluminum sheets, and caring for her brothers when her mother started a job cleaning houses.

After four years there, the family moved for her father’s work to the city of Nuevo Laredo, across the Río Grande from the U.S. city of Laredo, Texas.

One of her brothers got into a fight with a child in the neighborhood. Luna thought nothing more of it than two kids getting into a skirmish, but it turned out the other boy’s father was a drug trafficker. Soon, her family started receiving credible threats, and her mother stopped working due to her fear of leaving the house. This violent environment was not what Luna was accustomed to in Mexico, she notes.

At the same time, Luna’s father had been working as a maintenance man at an apartment complex in Hillsboro, Oregon for a year. As soon as he learned of the threats, he decided his family should join him.

Luna had already frequented the U.S. with her tourist visa — it was normal, for example, to cross over to the U.S. on weekends to buy groceries — and she was not impressed.

“One thing I knew — for sure — was that I did not want to come to the United States. Because of the culture and racism,” Luna recalls. “To me, the United States was probably the worst punishment.”

She saw U.S. culture as selfish, and she didn’t anticipate being accepted. She also considered her parents selfish for moving their children once again, this time to a place where they wouldn’t speak the language.

But at 15 years old, she boarded a plane with only her backpack and arrived in Portland, Oregon on December 23, 2005.

A family member along with her father’s employer and now-family friend welcomed Luna’s family at the airport that rainy night. They still laugh about that evening and the friend’s well-intentioned but failed effort to make them feel at ease — she played Spanish music in the car, oblivious to the fact that it was a sexually explicit song.

High school was a painful time. Teachers and white students tended to perceive her as strange, and many Latinos rejected her because she didn’t speak English.

She recalls that the only students who accepted her were “troublemakers,” and she was almost expelled multiple times, frustrating her parents. However, she graduated in 2008 and started working at a Mexican restaurant, per her counselor’s recommendation. She also says she soon rebelled, telling her mother that she was exasperated with the U.S. and done with learning English.

One day in 2008, her mother announced that she was registering herself for classes at PCC. She invited Luna along for support, but her mother had planned a surprise. When they arrived on campus, her mother flagged someone down and announced, “Help me register my daughter for classes.”

Luna listened as the man told them about the Oregon Leadership Institute, a program that provides resources to Latino students. Intrigued, she enrolled — and also worked through level 8 of ESL classes, joined MEChA, was elected student body president, rose to student council chair, and became involved with Oregon Dream Activists.

In May 2012, disappointed with lawmakers’ inaction, she and others from Oregon Dream Activists protested the lack of a path to college and financial aid for undocumented people. They aimed to challenge the myth that there weren’t undocumented people in Oregon and also pressure President Obama for an executive order that would allow them to pursue higher education and protect them from deportation — part of a broader national movement with the same goal.

The group broke off from a larger May Day rally, walked to Immigration and Customs Enforcement (ICE) headquarters in Southwest Portland in cap and gown, and dropped banners from buildings and declared themselves “undocumented and unafraid,” joining a national chorus.

“We came out as undocumented. I believed very firmly that that was the right thing to do, and I knew someone had to do it. I’ve never been someone to let fear control me,” Luna says. “So I got arrested.”

At the time, federal policy stated that undocumented people could be turned over to ICE (and eventually deported) even when stopped by police for a low-level misdemeanor. Luna wanted to test the Multnomah County Sheriff’s Office stance that rejected this policy and promised not to turn people over to ICE.

When the police told her she was merely getting a ticket, Luna became angry. She realized in that moment that even as an undocumented person, she had certain privileges — she was young, a student and an English speaker.

She gave police a series of fake names until officers lost their patience and declared, “You’re going to jail.”

She challenged officers about whether she was a priority arrest, and the charges were dropped two days later.

Her family was not proud of her arrest, but she felt that her goals of bringing visibility to and securing legislative change for undocumented people mattered more than their concerns. Since her introduction to activism in 2012, she hasn’t stopped. Luna has protested and been arrested a number of times, lobbied state and national lawmakers, made countless trips to provide relief to migrants at the border, and helped establish the DREAM Center and a $100,000 scholarship fund at PCC, among other achievements.

In June 2012, President Obama also announced DACA, and she enrolled at Portland State University, graduating in 2014 with a bachelor’s in criminal justice and corrections and in 2019 with a master’s in marriage and family therapy/counseling.

She now owns a private counseling practice in Tigard where she works two days a week. Her goal is to provide free or low-cost services primarily to immigrants who have experienced high-trauma environments. Eventually, she hopes to open a non-profit that provides mental health services and preventive care in a culturally-aware setting.

Both of these were degrees were challenging, due to the racism and other oppression she describes experiencing at the institution. She says that her motivation throughout that time came from realizing that the school system was not designed for her and recognizing that she’d have to make certain sacrifices to achieve her goal.

She recalls that much of her master’s program curriculum clearly catered toward white students and that when she tried to ask questions, she was often characterized as uncooperative. For instance, once, after Luna had raised a point in class, the professor addressed the whole group and said, “Wasn’t it better when they were down there, when they couldn’t speak up?”

Part of her motivation is to spare others the treatment she has experienced in academia and in society at large. Her own experience encourages her to be candid and fearless about her status and story.

“Losing the fear of getting deported, of going near ICE agents, of talking about my status is what makes me free,” Luna says. “We need to reproduce our stories and knowledge in whatever place we go. It’s important to continue to give access to the ones that are most in need because the whole community will thrive when the most marginalized advance.”

She also believes that society needs to erase the binaries between “good” and “bad” immigrants, especially undocumented ones, and reassess the privileges it grants the “good” ones. Politicians are happy to embrace immigrants who attend college or start a business, at the expense of immigrants who don’t, Luna says.

“Politicians promote a path to citizenship for the people they can use — for example, DREAMers who already have a degree, but not farmworkers, who they can use for cheap labor. I want the janitors, my parents, the farmworkers to be treated the way that I am treated. I’m part of this system that is dividing me from my parents and saying that I’m better than my parents,” Luna says. “ I want the government to treat all of us fairly,” she says.

Her ideal immigration plan would involve restructuring our paradigms and questioning why borders exist in the first place. She recalls a scene from the southern border that shaped this outlook.

“The first time I went to San Diego and saw that the ocean was divided by a fence, I cried. If we step out of our societal roles and see our world from another perspective, we’d ask, ‘What in the hell are we doing?’”

“Why do we even have borders?” she asks. “It’s a human need to immigrate, but why do we need a paper to prove our existence and say that we’re good enough to come to this space? We were not created to be like that.”