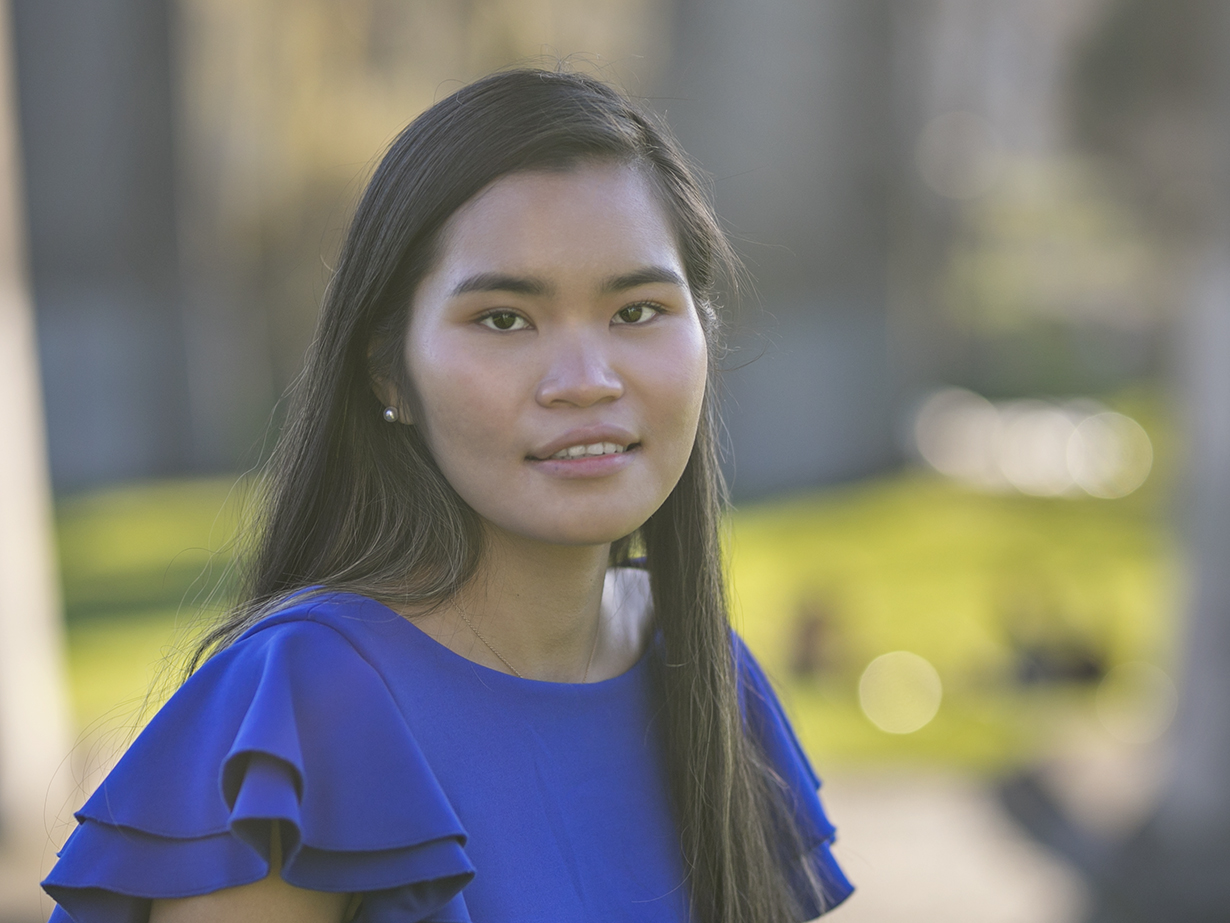 Every time someone asks May Lui Tike where she’s from, she answers: “I am not from anywhere.”

In 1996, Tike was born into the Ban Mae Surin refugee camp in Thailand, close to the Burmese border. Belonging to the Shan people, Tike and her family, who are practicing Buddhists, were minorities in a camp mostly populated by Karen refugees, who practiced Christianity.

In the camp’s small community, everyone knew each other, Tike says. Surrounded by many kids her own age, she remembers playing hide-and-seek and swimming during the summers in the river nearby.

“As a child, I didn’t know anything about the war,” she says, regarding the civil war that continues to rage in Myanmar. Tike’s parents, who had fled the unrest as teenagers, never told her about their own struggles. “All I knew was I was happy,” she adds.

As the oldest sibling of a younger brother and sister, Tike was tasked with making dinners and fetching water at the nearby river before and after school. Although she considered herself a good student, Tike struggled to understand the purpose of an education if everyone’s future was already designed for them.

“In my camp, people grow up, get married and go to the farm to work. I saw everyday life, so why did I have to think about my future?” she asks.

But in 2005, when Burmese refugees in Thailand became eligible for resettlement to third countries with the UNHCR, this future began to change as the people she knew found new homes in new countries. “I had a lot of friends, but after 2005 I didn’t feel like I had friends anymore,” Tike says.

When she was just 12 years old, she remembers waving goodbye to her best friend, Ahthasoe, whose family was granted resettlement in Australia. At the entrance of the camp, a car came to pick up her best friend and her family. She still remembers Ahthasoe’s teary-eyed face through the window of the car. “I never thought we would meet again,” Tike says.

In just one year, Tike says at least six families left. Knowing of no place other than the camp, Tike’s knowledge of where these families actually went was limited.

Although reluctant at first to leave, her parents, who had stable jobs in the camp, decided that in order for their children to receive a “better future in a country we could call home,” they must go too. In 2012, they applied for the United States, and one year later, their application was approved.

Leaving early in the morning, Tike and her family walked to the camp’s entrance — friends beside them, helping carry their belongings. On the outside of the camp’s gate, a car was parked, waiting to take them away. “It was very sad,” she says. “It was the only home I knew.”

That same day, after her family left, a devastating fire burned two sections of the camp, causing 37 fatalities. Tike and her family were waiting to fly out of Bangkok in a nearby town when they heard the news. “Even though we didn’t have a lot, we still sent back all our supplies to the camp,” she says, including her favorite red dress. “They needed it more.”

On March 27, 2013, when Tike and her family landed in Portland, Ore., family friends from the camp met them. Because it was the end of the semester, Tike had to wait the summer before she could start high school. She remembers feeling very lonely in her family’s new home, spending her days watching TV in a language she didn’t understand.

Although Tike started her junior year at Reynolds High School, speaking no English words other than “yes” and “no”, she quickly understood, for the first time, she had the power to design her own future. “I began to see a lot of doctors and teachers and I thought ‘Oh I want to be like them one day’” she says. “That’s when I knew why I was going to school.”

Today, Tike attends Mt. Hood Community College, where she is earning a degree in medical accounting. She plans to start an externship at Providence Portland Medical Center next term and eventually transfer to Portland State University.

She has also reconnected with childhood friends from the refugee camp through social media, including Ahthasoe, who is now a dentistry student in Australia. The first time they called, they commented on each other’s Australian and American accents.

In January, Tike passed the U.S. naturalization test. “I can finally claim that I am a citizen of the United States and I feel so proud,” Tike says. She now has an answer for anyone who asks where she’s from: “My home is the U.S.”

One thought on “Finally A Place to Call Home”