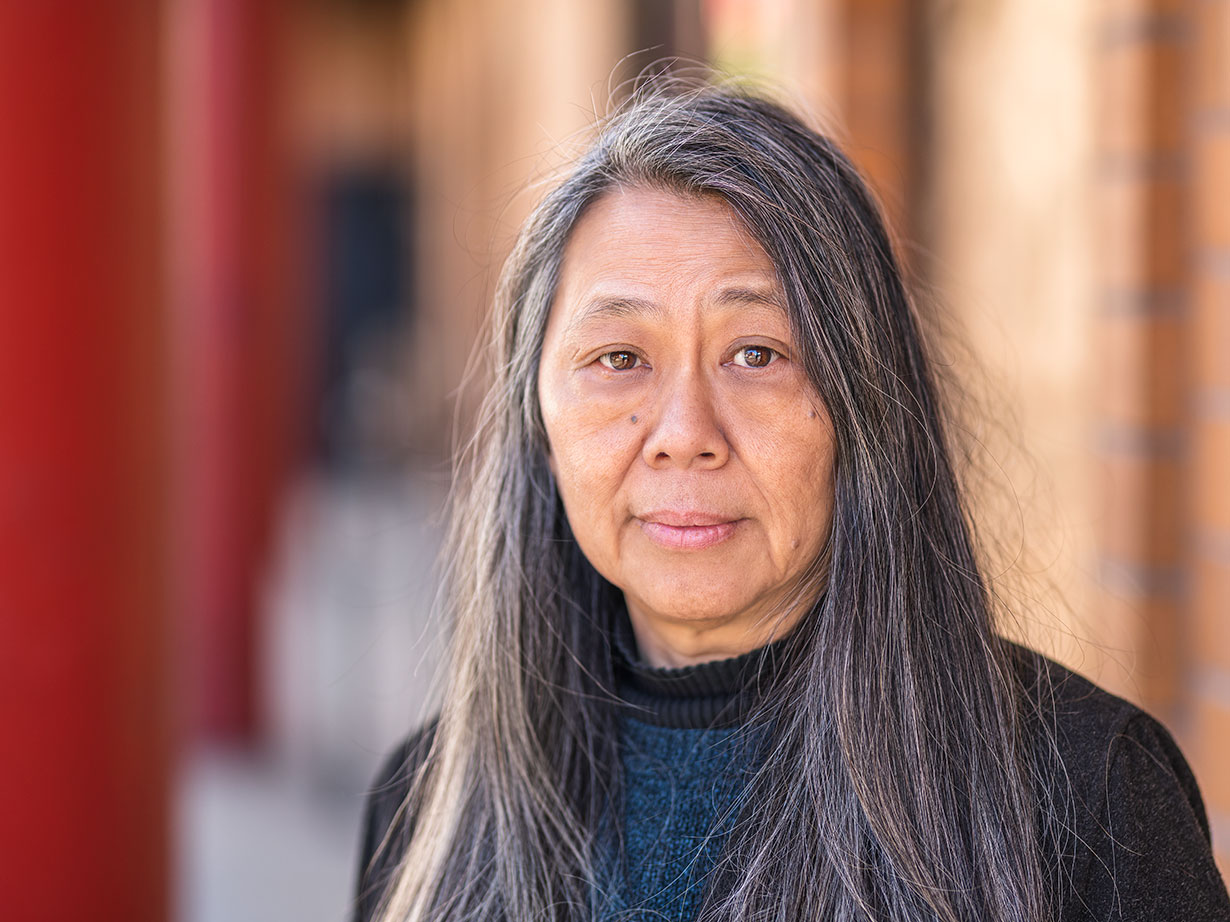 What’s the ideal training for a conceptual artist?

Roberta Wong credits the time she spent chopping vegetables, washing dishes, and making dim sum pastries  at the family business as a boon to her creativity.

“These tasks are all very methodical,” she notes. “You can let your mind wander.”

Wong was born Sept.7, 1953, in Portland, Oregon. As the daughter of Chinese immigrants, she was expected to begin working at the family business, Tuck Lung Company, when she was nine. “Every day after school I would take the Rose City bus into Chinatown to begin my shift,” she remembers.

After several hours of chopping vegetables and folding dumplings, she would sit in a corner of the restaurant and do her homework until the restaurant closed and the family headed home to southeast Portland.

“Growing up I wasn’t very verbal; I was reserved, not talking until I actually had something to say,” Wong explains, “I lived in a very cerebral space.”

With his own father, Soon Yook Wong, Francis Gang Wong (Roberta’s late father) left China in 1926. In 1930 they  opened Tuck Lung Company, a grocery store in Portland’s Chinatown. Bias toward Asians was strong at that time in the Pacific Northwest, but the two Wongs, father and son, managed to establish a business through a merchant loophole in the Chinese Exclusion Act.

Francis Wong returned to China in 1931 to marry. Leaving his wife in China, he returned to the U.S., joined the U. S. Army, and served in WWII. Following an honorable discharge in 1947, Wong was able to bring his wife Helen and two children, Albert and Allen, to Portland. With the family reunited, Helen and Francis went on to have six more children, including Roberta.

Not until much later did Wong learn that her brother, Allen, was not a biological sibling. Albert Wong had been a twin but lost his twin to illness. With a vacancy in the family and the prospect of allowing another village child into the United States, Allen’s biological parents gave him to the Wongs to start a new life in the United States. This was a relatively common process, and those who took the identities of dead children became known as “paper brothers” or “paper sisters.”

Wong’s parents bought their first home in southeast Portland in 1947. “I guess you might call it a red-lined neighborhood, approved for African-Americans as well as Asians and other immigrants,” she says.

A back injury in the 1950s  led Wong’s father to recruit his son to manage the business. His son opened a coffee shop in 1962, while the grocery store continued to supply many local Chinese restaurants.

Tuck Lung Company drew  customers from all over Oregon and served the first dim sum in Portland. “We were a coffee shop that served breakfast and lunch,” Wong says. “We intentionally chose not to be open for dinner so we wouldn’t compete with other businesses.”

Eventually Wong’s brother and his wife built the new Tuck Lung Building in 1978.

Wong was drawn to art at an early age, but found representational, elementary art so frustrating that she gave it up until her last year in high school. In her high school ceramics class,  “I discovered that I could make a statement out of imagery,” Wong explains,  “it was a Black Power figure head.”

Wong enrolled in Portland State University to study sculpture. She continued to work at Tuck Lung Company during her time in college. When her father passed away in 1975, she took a break from college to support the family.

Returning to college, Wong continued as a sculpture major. During her final year she was asked to explore another medium outside her major, and discovered conceptual art. Conceptual art focuses more on the intention or concept behind a piece than the finished product.

“Once I found conceptual art,” she says, “I felt it met my needs as an artist, to make people think.”

Directly out of college, Wong became involved in art curation and nonprofit management.  “I knew that when I left college, I would be leaving an environment of support,” Wong explains, “I began volunteering at the Rental Sales Gallery at the Portland Art Museum to re-create that environment. I ended up learning a lot about the artists in our community and the business side of art.”

In 1984, a year after graduating from PSU, Wong produced a piece of art called “All Orientals Look Alike.” She created it by weaving together multiple faces to create a single portrait. “The title highlights the stereotypes that we Asians deal with, as we are often told ‘we can’t tell you apart,’ but it is also a way to engage through humor,” she explains. “People are afraid to laugh because they know it’s not funny, but for me to make a joke of it is to push it back in the audience’s faces.”

“All Orientals Look Alike” got a lot of press and caught the attention of the director of the Interstate Firehouse Cultural Center. “She contacted me and offered me a job, coordinating artists.” Wong worked at IFCC from 1985 until 2004.

Wong got married on New Year’s Eve, 1988. She and her husband met several years earlier, at a party at Wong’s sister’s house.  “He followed me home,” she says with a laugh. The couple has three children.

In 1985, she created “Chinks, III.” “A chink is just a hole in the wall, but I wanted to bring that word to people’s minds and all of the racial connotations, ”she explains.

The installation includes a six foot-high wall of encyclopedias with missing spots to look through. On the other side of the wall is a desk with the books that were included in the education system, excluding minority voices. Inside the desk are those stories.

“The chinks in the wall represent the voids in our education system,” she points out.

“All-American”–an image of a braid, cleaver, and chopping block, arranged to look as though the braid is being chopped off–was presented in 2003.  “In many ways, this piece produced the kind of response I was anticipating; a kind of shock to witnessing such a brutal image,” Wong recalls. “I want to create an opportunity for awareness.”

Wong showcased “I Am You” in 2017 as a response to police brutality and in support of Black Lives Matter. A figure stands with its hands up in surrender. Embroidered on the palms of the hands are the words “I am you.” Additional embroidering outlines the internal organs, highlighting every human’s similarity. Wong said her goal with this piece was  “to show that each of us are made of the same stuff. Hurting someone else also hurts you.”

Wong spends a lot of time considering and visualizing potential conceptual art installations. “I don’t execute something until I have the opportunity to show it,” Wong says. “My studio is in my head.”

Most recently, Roberta Wong’s art was showcased in the Portland Chinatown Museum. Her installation titled “Vincent” was displayed in memory of Vincent Chin  and in solidarity with Black Lives Matter.

She is clear on her philosophy as an artist and activist, explaining: “I do not want to manipulate people’s behavior, but try to present ideas without bias and hope the viewer will become self-aware and decide on their own action.”