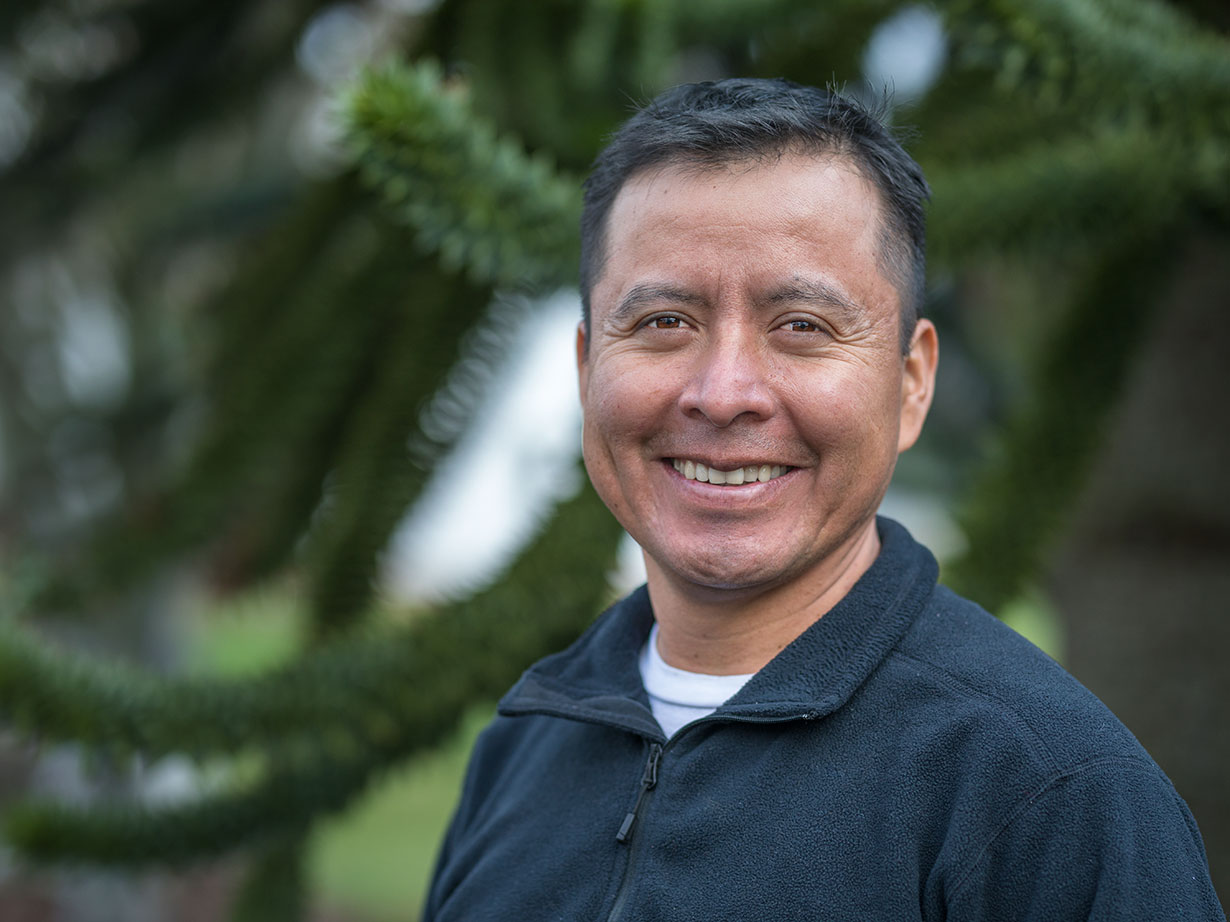 When Francisco Bautista married, his father gave him the family’s 250-pound wooden foot-pedal loom. When he left Teotitlán del Valle, Mexico for the U.S.the loom – named “El Aventurero” traveled with him.

Francisco left his home in the foothills of the Sierra Juárez Mountains at age 24 to come to Oregon. He brought with him centuries of cultural knowledge, the Zapotec language, and the creativity to adapt his weaving tradition to new circumstances.

The eldest of three boys, Francisco was eight when his grandfather and father taught him how to clean wool and make bobbins and fringe. He was soon weaving multicolored, hand-dyed, intricately patterned rugs.

His wife, Laura grew up in the same village. Her education as a weaver reclaimed work that had once been women’s domain. Weaving in the village dates back to 500 BCE but when the Spanish friars arrived with heavier tapestry looms in the 1500s, men took over the art form from women.

“It’s a little bit sad to say,” Francisco reflects, but women were “not allowed to do a lot of things” outside marriage and the family.

Most of the families in Teotitlán del Valle know how to weave, Francisco says. But that also means that making a living is a challenge with such fierce competition for sales to tourists.

So, after he and Laura married, they pursued their dream of coming to the U.S. for more opportunities.

On his first night in Oregon, Francisco arrived to a lashing rain followed by a deep cold snap. For hours, he sat mesmerized as the snow fell. Laura joined him a few months later. As a child, she’d read a book about Oregon and longed to watch the four seasons unfold.

Before coming to the U.S. Laura had never been outside her pueblo. But she harbored ambitions of her own. As they adjusted to life in the U.S, the couple also started selling their wares at Portland’s Saturday Market.

But it took time to learn the ropes: how to apply for a permit, get a booth, and expand their English. Gradually they expanded to other craft fairs.

At one Christmas event at the North Portland Expo Center, a representative from the Portland Handweavers Guild, Blithe Jensen, invited the couple to speak to the group. Ecstatic, Francisco and Laura carried home the meeting’s address on a tiny slip of paper. But they lost the paper and had no way of contacting their host. It was a full year later when Jensen found them at the same Christmas event and issued a return invitation. The Guild welcomed them, and offered ways to help sell their art. During the meeting, the young Francisco children sat under the table for hours without making a sound, impressing members of the Guild.

The couple also taught their children about their work and the Zapotec words for colors, marking each weaving with four dots. Those represent four generations of Zapotec weavers and the four members of this Oregon family.

And now those two Oregon-born children are also artists. Cinthya, 17, a painter as well as a weaver, hopes to transfer her portraits onto the loom. David, 12, recently had his first show in Hood River – a display of thirty small weavings.

In their work, the Bautistas integrate Northwest images with the Eye of God and other symbols of the Zapotec world. Their natural dyes mix dark tones from Oregon walnut trees and blackberries with the bright crimson from the cochineal beetle found in Mexico.

“Half of my heart belongs to Zapotec culture, half belongs to Oregon,’’ Francisco says.

Francisco says that coming to Oregon was destiny.

“It’s so interesting, how the journey goes,’’ he said. “One day that we are talking about one thing and then we realize we are there. We are so blessed.”

2 thoughts on “Weaving a New Life into a New City”