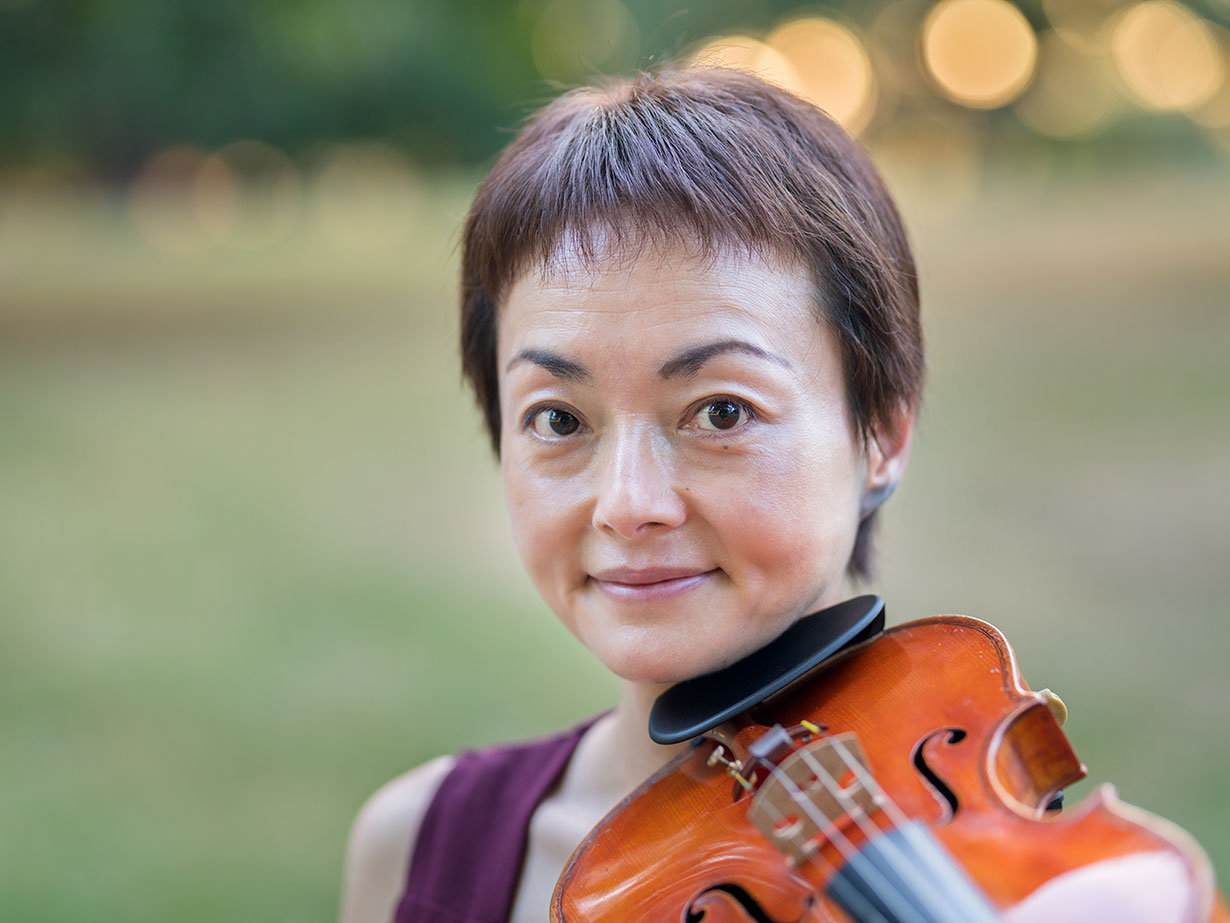 Ando was born in Nagoya, Japan. When she was 7, the family moved to Zushi City, a suburb of Tokyo, for her father’s job.

From the beginning, Ando was exposed to a life of music. “My mother’s best friend in college was a teacher of the Suzuki method, and she got very influenced by her,” she explains. “My older sister played the flute and my middle sister and I both played the violin.”

Ando credits her early success to her sister: “I think because my middle sister practiced violin in the same house everyday, I could probably catch up, just mimicking her.”

Because she was so focused on her music and much of her time was spent commuting from Zushi City into Tokyo for class, Ando didn’t have any social life.

But she understood her priorities. At 17 her studious mindset paid off.  She won a local competition and performed with the Kanagawa Philharmonic, a professional orchestra. Remembering the event, Ando says,  “I was not so nervous, just so excited. My mom took me to get a dress made for that special concert- a long, blue dress…I was just so excited about that dress!”

Ando was soon invited to play with a choir. “That was the first time I made some money playing the violin,” she remembers, “It was $100 and I kept it on my desk for a while.” Even after she deposited the money, Ando recalls keeping the envelope just to look at and to remind herself. “I saw that I could do what I like and get paid!I thought it might be a good life to become a professional musician.”

After that experience, Ando began to see more and more success and decided to audition for the prestigious music program at Toho University in Tokyo.“That was a really hard audition. So I prepared every day for a year for those ten minutes.”

She was accepted to the program and, like her earlier years of school, spent most of her time studying and commuting. “I took three trains each way every day,” she remembers, “It took two hours and fifteen minutes from my house to the university.”

During her third year of college, she met a professor from the U.S., Edwuard Schmeider, at a music festival in the Netherlands where he was guest teaching. After graduating, she was accepted into Schmeider’s Artist Certificate program at Southern Methodist University in Dallas, Texas on full scholarship.

Fumino spent two years in the Artist Certificate program before moving to Miami to play with the New World Symphony. In the following years she earned an MA from the University of Oklahoma.

In 2002 she joined the Oregon Symphony in Portland as a violinist.

When she first visited Portland for her audition she remembers thinking, “The beautiful river, beautiful water, mountain, dark green trees just made me think ‘this is my place, this is my city.’”

Now, while Ando does not identify as an American but as a Japanese person living in the U.S., she does identify as a Portlander. But she chooses not to begin the citizenship process. Japan does not allow dual citizenship, she explains. “And I want to  have a Japanese passport.”

She visits Japan every year to renew her connection. “During the summertime I visit my family but I usually spend three or four days just travelling by myself to explore Japan because I couldn’t do that when I was young.”

Since being in Portland, Ando has been introduced to numerous players of the koto, a traditional Japanese instrument. “ I didn’t know any koto players in Japan but in Portland I’ve met so many,” Fumino laughs, “I really enjoy the Japanese music on a Japanese instrument. At that time I feel I am truly Japanese; the music is coming through me.” Like the music she plays, Ando transcends borders and establishes roots on both sides of the world.