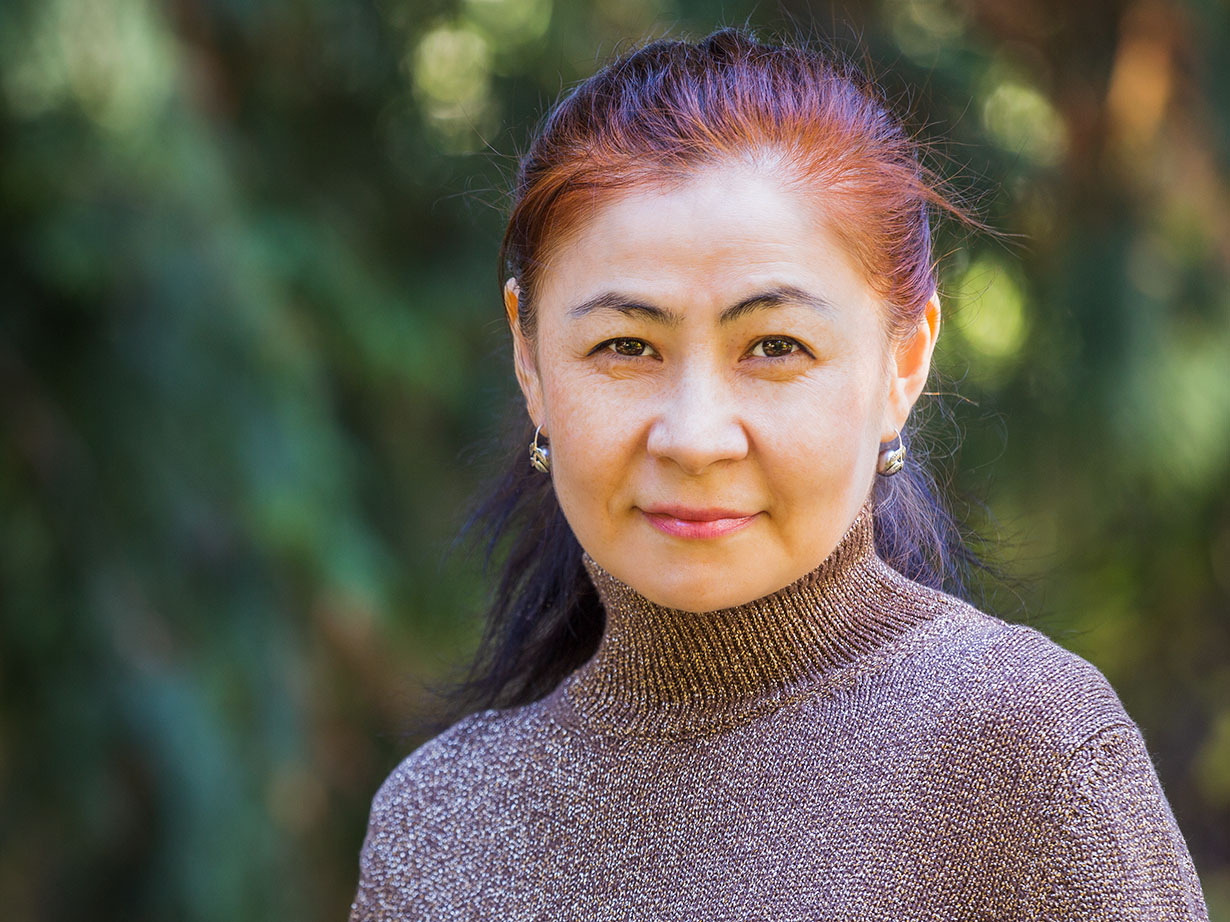 “The window was open and it was a beautiful sunny day with a little breeze.  My teacher was sitting on the chair by the piano. I liked her right away. When I got home my mother said ‘Okay, you will go to music school.’”

Zabenova was born May 16, 1978, in Kazakhstan under Soviet rule, a fact she feels is crucial to her cultural identity. “I speak Russian, I went to Russian school, you can’t underestimate that connection,” she explains.

While she grew up in the capital city of Almaty, Zabenova spent every summer with her grandmother in the countryside, eating strawberries and playing outside.

“My grandmother couldn’t live in the city,” Zabenova explains, “Some people just can’t live in enclosed spaces. She used to live in a yurt in the mountains. When I was 5 she took me to Easten Kazakhstan where she used to live. I remember the huge huge mountains and the big rivers, where the water was so fast and freezing cold. She told me they used to have thousands of horses and sheep that roamed around the village.”

Although both of her parents were renowned scientists, they felt it was important for Zabenova and her two siblings to study music.

“They had this idea that music nurtures you as a human being,” she says.  “They didn’t think about me becoming a musician. They wanted me to do something that would develop my sensitivity, shape me and make me into a better person.”

At first Zabenova attended a general education music school, taking classes in violin, her preferred instrument, as well as piano and choir. She was so motivated to play that her teacher, Olga Danilova, suggested to her parents that she be transferred to the music school for gifted children, which would guarantee her a career in music.

Zabenova stuck to a strict schedule, spending five to six hours every day practicing violin, as well as going to her teacher’s house on weekends to prepare for upcoming competitions.

“My teacher said if I practiced well she would make a delicious lunch, and she was a great cook. She was like a second mom to me,” she remembers.

At 12, Zabenova played in the First Youth International Tchaikovsky Competition, as the only person representing her school along with musicians from two dozen other countries.

Her mother accompanied her and had a special dress made for Zabenova for the occasion: “It was a pink silk dress, with maybe 30 buttons all the way down, and the bottom was fluffy.”

Zabenova remembers standing backstage, anxiously waiting to be introduced, her hands just itching to play in the beautiful conservatory under portraits of famous composers. “I remember being terrified honestly, but also very excited.”

She was awarded a prize for best-played piece by a national composer, as well as one of only two diplomas given to musicians who most impressed the judges. But when she did not make the final round,  she felt she had failed and was confused when she went home and everyone was congratulating her.

After that there was no question that music was what Zabenova wanted to do with her life. She played competition after competition, rising through the ranks, and by the time she finished high school, she was one of the five top young musicians in Kazakhstan. She got her Bachelor’s degree at Almaty Conservatory of Music, completing the five-year program in only four years.

While at the Conservatory, Zabenova worked as a concertmaster for Kamerata Kazakhstan. She used her salary to pay for private English lessons with a tutor.

In 2001 she played in the International Violin Competition of Almaty. The judge was her musical hero, Oleh Krysa.

“I had an LP of him playing, and I’d been listening to it since I was 15,” Zabenova explains. “That was the first time I saw my teacher, on the cover of that record, with his glasses and very intelligent face, and he played like God. I thought, someday I will be his student.”

She won second place in the competition, and afterward, told Krysa she wanted to study with him. He explained that he was now teaching at Eastman School of Music in Rochester, N.Y.

He agreed that if she recorded a tape, he would give it to the department chair, and if she was admitted, she would be welcome in his studio.

“So I recorded my tape in one night,” she remembers. “I went to my pianist, Arman Tleubergenov, and told him we have to record this right now, because Krysa is flying out tomorrow morning. The pianist said, `Oh my God, you’re driving me crazy!’ I remembered he smoked two whole packs of cigarettes that night.”

Zabenova and her pianist played until 4 in the morning, and by 10 a.m. that day she was handing her tape to Krysa.

She anxiously waited three months for news from Eastman, worried because she would need a full scholarship to study there. She realized how fortunate she had been to be educated under the Soviet system, where her entire education, including four years in conservatory, with the top top teachers in the country, was paid for by the government.

Zabenova was awarded the scholarship and moved to Rochester in 2001, at age 23.

During the three months before school started she lived with Krysa and his wife, and was occasionally advised by him as she practiced.

“It was surreal,” she remembers.  “His wife became my pianist once I arrived at school. They were both so generous, even though I had met them only once.”

Zabenova earned her doctorate at Eastman in 2009. But 17 years after playing with Rochester Philharmonic, she began to lose the focus she had found through competing and achieving her degrees.

“That was the first real crisis of my life,” she notes. “I was not very satisfied with what I was doing. I got very depressed. I stopped practicing. I didn’t even want to play anymore.”

In 2017 her mother suggested she go live with her brother, who had moved to California. So, without any plan, Zabenova quit her job with the orchestra and moved across the country to Irvine, California. She began playing gigs and then teaching at Pacific Academy, a private high school.

“Slowly, that made me start playing again,” she says.

During that time Zabenova met her boyfriend, James, while he was visiting a friend in Irvine, and the two began a long-distance relationship. In August, 2020, she moved to Oregon to be with him.

“I wasn’t afraid,” she says. “I’d already moved once without any job or plan, why not do it again? Love changed everything for me.”

Eventually, Zabenova became a violin instructor at Lewis and Clark College, and recently got an audition as a sub for the Oregon Symphony.

She also coaches for the Metropolitan Youth Symphony and Elementary String Project in Portland and has opened her own music studio, Lake Oswego Violin (www.lakeoswegoviolin.com), where she aspires to continue the legacy her own teachers instilled in her.

“I feel I have to give all of myself to my students.” Zabenova explains. “I want to deliver for them the same way all my teachers always delivered for me.”

One thought on “After Many Moves, The Music Still Plays”