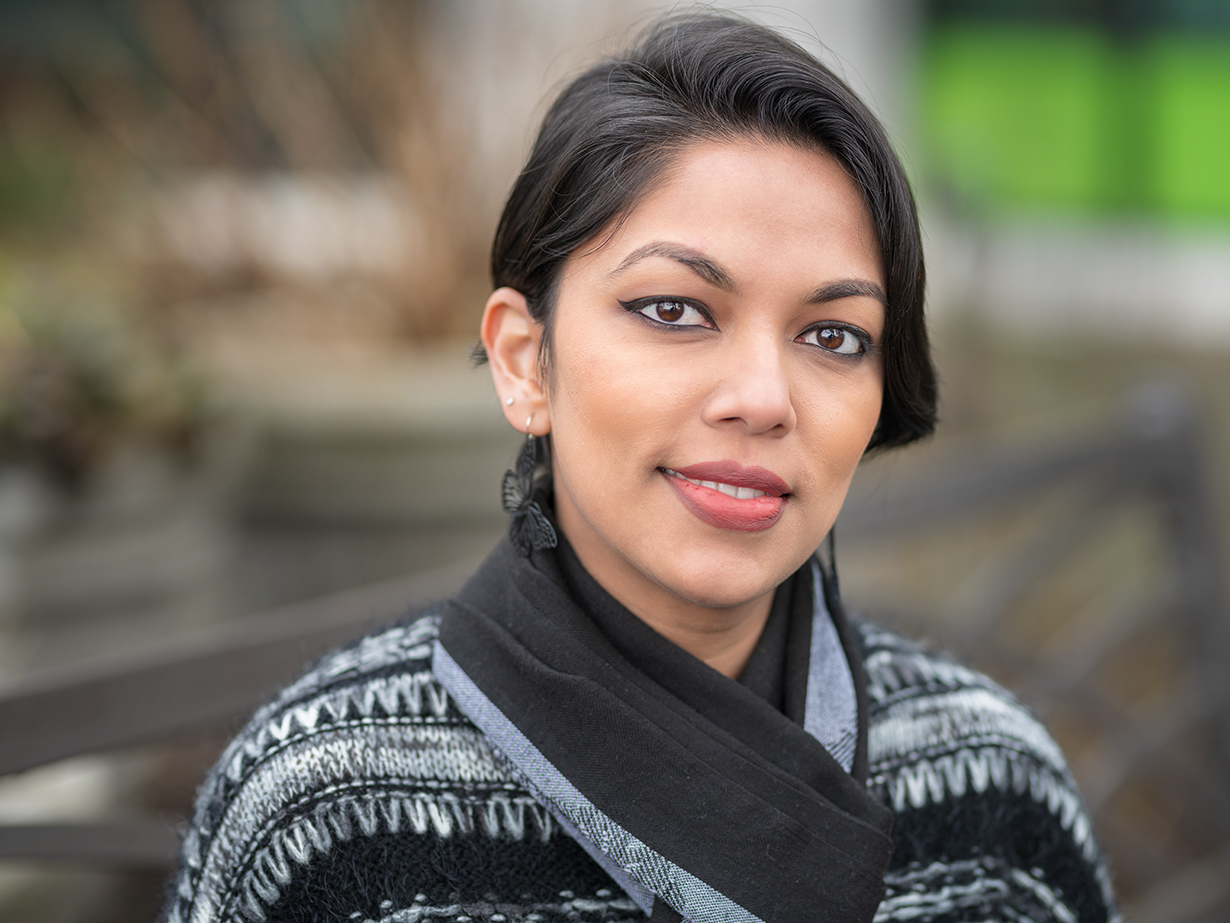 Nothing about the financial world interested Sarah Rikaz. The only tie she could find between her passion and the career her parents wanted for her was using a credit card to create a recent painting. She said, “I did the whole painting with a credit card because I thought the lines would be interesting.”

Ethnic tensions resulting in on-and-off insurgencies began in Sri Lanka in 1983, two years before Rikaz was born in the country’s capital, Colombo. Political turbulence in Asia’s oldest democracy continued throughout her childhood. On her way to school, Rikaz remembers,  “There was a huge block of road closed off.”

Rivalries between the Tamil minority and Sinhalese majority in the country formerly known as Ceylon had begun 10 years before Rikaz was born, , eventually resulting in civil war in 1983. Rikaz herself was never harmed in the ongoing hostilities, but recalls that growing up “there were a lot of bomb blasts near Colombo.” For Rikaz, the main effect of  the political strife was that her parents became increasingly protective and more insistent that she pursue a stable career path such as accounting, the same career as her father.

Thumbing through a newspaper when she was only six, Rikaz was struck by portrait photographs of Mother Teresa and Princess Diana. “I thought,” Rikaz says, “They were beautiful pictures and that I would try to paint them using what few colors I had.”

Knowing her parents were less than supportive of her artistic inclinations, “I didn’t show my mother because I thought she would tell me off. So instead, I showed my art teacher at school who said, ‘this is the most amazing thing I’ve seen.’ “

Despite her parents’ disapproval,  Rikaz continued to sketch. In grade school, Rikaz says, “Sometimes I’d pretend to study but I’d actually be drawing.”

In high school,  Rikaz was given the option to take an arts-focused curriculum. But her parents vetoed that idea, saying,  “‘No, what are you going to do by drawing?’ ”

To appease her parents, Rikaz took a commerce-focused curriculum while her father trained her to be an accountant. Behind their backs,  Rikaz continued practicing art. “I think I learned more by teaching myself,” she says.

When it came time for college, Rikaz told her parents that she could not do accounting because art was her passion. Her parents, seeing that their daughter’s love for art still had not waned, approved of Rikaz’s pursuit of a Graphic Design degree at the Institute of Business Management.

In 2006, Rikaz began her career in graphic design after graduating from an online program. “I started as a junior graphic designer and eventually became a creative director.”

Her parents rolled with her decision to study graphic design, but now that she was a young adult, they said it was time for her to find a husband. She rejected the suitors they chose for her, declaring,  “I don’t want this, I will find someone myself.” Then, while volunteering at a cleanup event following the devastating 2004 tsunami that struck Sri Lanka, she met Rikaz Thaha.

“We were friends for awhile,” said Rikaz, “And eventually he asked me out and I said let’s see where this goes.”

The two married in 2008. Not one week after the ceremony, her husband moved to the United States to further his own education at the School for International Training in Vermont. As a bride of just a week,  thousands of miles from her husband, Rikaz dedicated her time to honing her skills as an artist.

“I poured my heart into my work,” she says.

While her husband was studying abroad, Rikaz was promoted at her job and began establishing herself as a professional artist.

From far away, her husband assured her that she could develop as an artist if she lived with him in America. In 2010, after two years apart, Rikaz moved with her husband to Portland, Oregon where he had got a job at a bank.

She is a busy young mother who nevertheless finds time for her passion. As she explains,  “Art has always been my way of making sense of the world around me.”