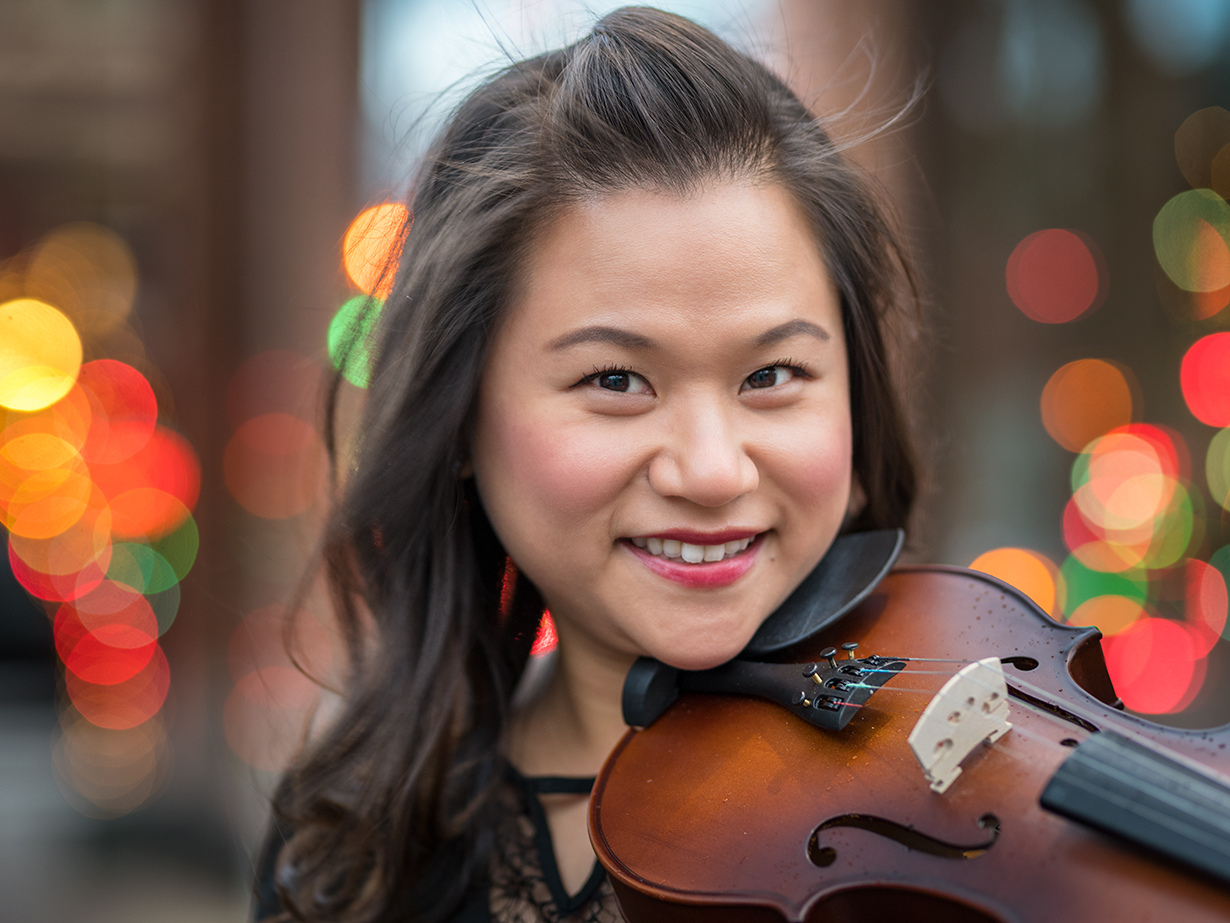 It’s the late 1980s in Taipei, Taiwan.  Every week, four-year-old Ruby Chen ventures with her mother from their storefront apartment to the local Yamaha Piano store for keyboard lessons.

Never would she have guessed those lessons would take her from Taiwan to Canada, all the way to Yale and across the United States, straight to a violinist chair with the Oregon Symphony. Through her life, Ruby’s relationship with music has been unbreakable.

Ruby’s demeanor is both lighthearted and quite frank. She thinks of herself as lazy, yet it’s hard to envision how. When she’s not playing music professionally, she is playing music because she loves it. She’s recently taken up running to blow off steam when she’s not busy.

“I don’t think I had a normal childhood,” she recalls. “Kids play outside. I didn’t really have that.” Instead, she had the violin, which she began playing at age six after transitioning from keyboard. Before long Ruby was enrolled in a competitive music elementary school. Learning music theory by day and practicing violin by night, she often even ate dinner at her instructor’s house to save more time for practice.

Competitions started in fourth grade. One of the first pieces she ever competed with was Mozart’s Concerto No. 5. It went quite well and by middle school, Ruby was second in the nation for her age-group in violin. Instructors were urging her parents to whisk her away to North America, where her talent might gain international attention.

The Chen family sold their medical equipment business and found themselves settling into a quiet suburb of Toronto, Canada when Ruby was twelve. She and her two siblings started school in a language entirely different from their Mandarin Chinese mother tongue. That first year, she found herself eating lunch in the bathroom, too shy to approach classmates. All her classmates knew about her was that she played the violin.

Sometimes she felt it was all she knew about herself. “I didn’t have a lot of my own opinions,” she remembers. Her mother pushed her to stay regimented in her music practice, and Ruby maintained top-tier status in her age group. “I did go through times where I just didn’t want to do it,” Ruby says. Nevertheless, she stuck with it.

As high school graduation began its seemingly rapid approach, Ruby’s parents were adamant—after years of strictly monitoring her musical path—that she choose to continue with music as a career only if she wanted. She decided of her own volition to go professional. She auditioned for and enrolled in the prestigious Eastman School of Music in Rochester, New York.

“My parents weren’t around all the time anymore, and I started making decisions on my own,” Ruby says. She was pleased to make acquaintance with many fellow “music nerds,” as she lovingly dubs them, many of whom she keeps in contact with today. She even had the chance to play with pop contemporary Josh Groban. “My mom was really excited,” she says.

Upon finishing her degree, Ruby headed to New Haven, Connecticut to earn a master’s at Yale School of Music. “I went from one depressing city to another,” Ruby jokes, but she wasn’t there for the nightlife. Much of her energy went towards auditioning for orchestras and trying to make it with her side-project string quartet. Unsure of her next steps, Ruby moved to New York City post-grad and eventually auditioned for the Oregon Symphony. She became a violinist there in 2011.

When not playing at the Arlene Schnitzer Concert Hall, these days Ruby plays through Classical Up-Close, a series by the members of the Oregon Symphony. “We wanted to get closer and get out to the areas where classical music is not as accessible to people,” Ruby says.

After all this time, three aspects of Ruby’s life remain the same: the violin she’s had since middle school, Mozart’s Concerto No. 5—which she still plays for auditions today—and the impact her mother has made on her work.“Without her pushing me, I wouldn’t be here doing what I am doing today,” Ruby says.

She has recently started taking students, and hopes to create a less stressful learning space for kids to enjoy the violin. “You don’t do music for the money. You do it for your love for music,” Ruby says.

This article was last updated to correct an error regarding the Classical Up Close series, which is not organized by the Oregon Symphony, but was established by members of the Symphony.