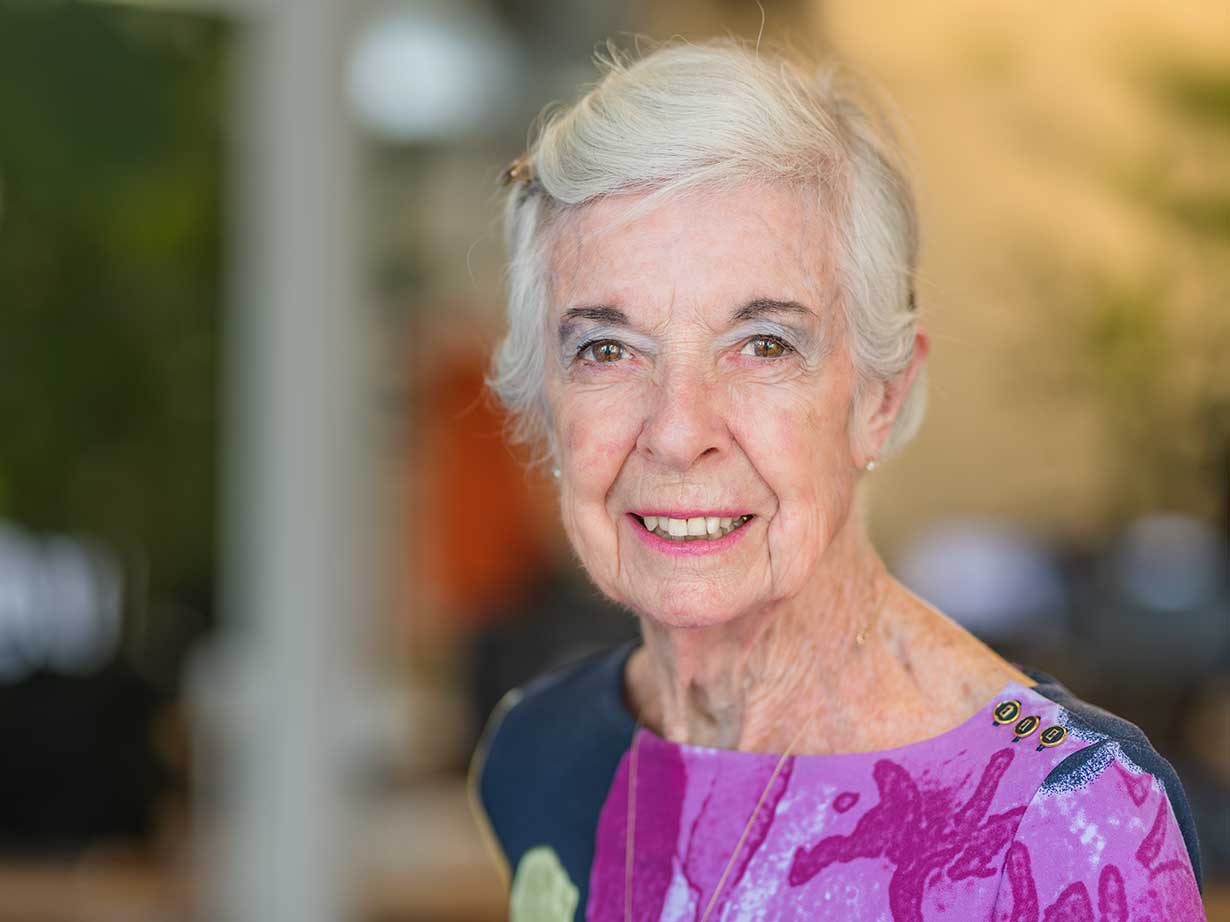 One of Margaret Stewart Clark’s earliest memories is of sitting, at age two or three,  with her sister, who was blind, as the older girl taught Clark how to knit. “My sister was lovely with me,” she remembers.

Margaret was born in Liverpool, England, in 1932, the youngest of five. When she was still quite young, World War II began.

“I was evacuated when I was seven, in 1939,” she says. “All the children were taken out of the cities, so I was taken to a town 30 miles outside Liverpool.”

Clark was sent to live with a widow and her three unmarried daughters. “The people I lived with were very kind,” she remembers. “When you are in a war everybody has to do their best to help out and everybody felt it was their duty to take kids in. But there were no other kids in the household and the children who lived in the town did not play with me because I was an evacuee. It was quite lonely, but I got used to being by myself.

“My mother came to see me once a month,” she continues. “It wasn’t easy for her to come.”

In her time alone, Clark worried about her family, who felt so far away.

“I ruminate a tremendous amount,” she says. “And I believe that I started ruminating there because I thought about everybody all the time, wondering, ‘Are they going to be dead? Am I going to be left alone? What am I going to do if Hitler comes back with the bombs and my mother and father are gone?’ At the time I didn’t know whether I would ever go back.”

At last, at 11 years old, she was sent back to Liverpool to begin high school. “I enjoyed being back,” she remembers. “Everybody was involved in rebuilding what had been bombed.”

Clark adjusted easily to life back in Liverpool and was always at the top of her class. When she was 17, a doctor came to their home to check in on her grandmother. He suggested that she become a nurse. He recommended her to Guy’s Hospital in London.

“So that’s what I did,” she says. “I went to train there as a nurse, and then a midwife. If I had stayed, I would have been matron of Guy’s. There’s no doubt. I should not have gotten married, I should have remained a nurse and a midwife and moved up the ladder at Guy’s. In hindsight. But in those days women did not work. We did good work with the church and all of that kind of thing, and we had tea.”

Margaret met and, in 1955, married, Roy Clark, a medical student working at the hospital. “I would only have to turn around and he was there,” she says. “I fell in love with his father, who is a famous cellist. I am a music person, and I just loved being with that family. We used to go to all of his father’s concerts.”

In 1956 her husband was invited to work with Kaiser Hospitals in Portland and the couple moved to the Portland area. Both Clark and her husband began working at Kaiser. She helped set up and run their home-care business.

After their two sons, Graham and Tim, were born, Clark stopped working outside the home so she could take care of the boys and volunteer with many community arts organizations.

“Portland has been very good to me,” she says. “I was on the board of the symphony, the opera, Friends of Chamber Music, and Chamber Music Northwest.”

After her divorce, at age 50, “I did all the things that I liked to do,” she says. “I ushered for the opera and the symphony for years.”

Clark’s son Graham later committed suicide. “I had no idea he was so unhappy, and it was devastating to me,” she says. Her other son Tim moved to Arizona to teach business, and Clark moved into an assisted living apartment by herself.

“My friends are all here in Portland,” she says. “And I love the music community.”

These days, she says, “I ruminate a lot. COVID has brought back the loneliness of my early years.”

Walking through her small apartment, she pauses to enjoy the art on the walls, familiar scenes in the UK. One of her favorites is a pair of photos of her two sons, each as a toddler and each wearing a sweater she knit for them.

“As life becomes less restricted and we can get out more,” she says. “I look forward to music again. I’m a great listener.”