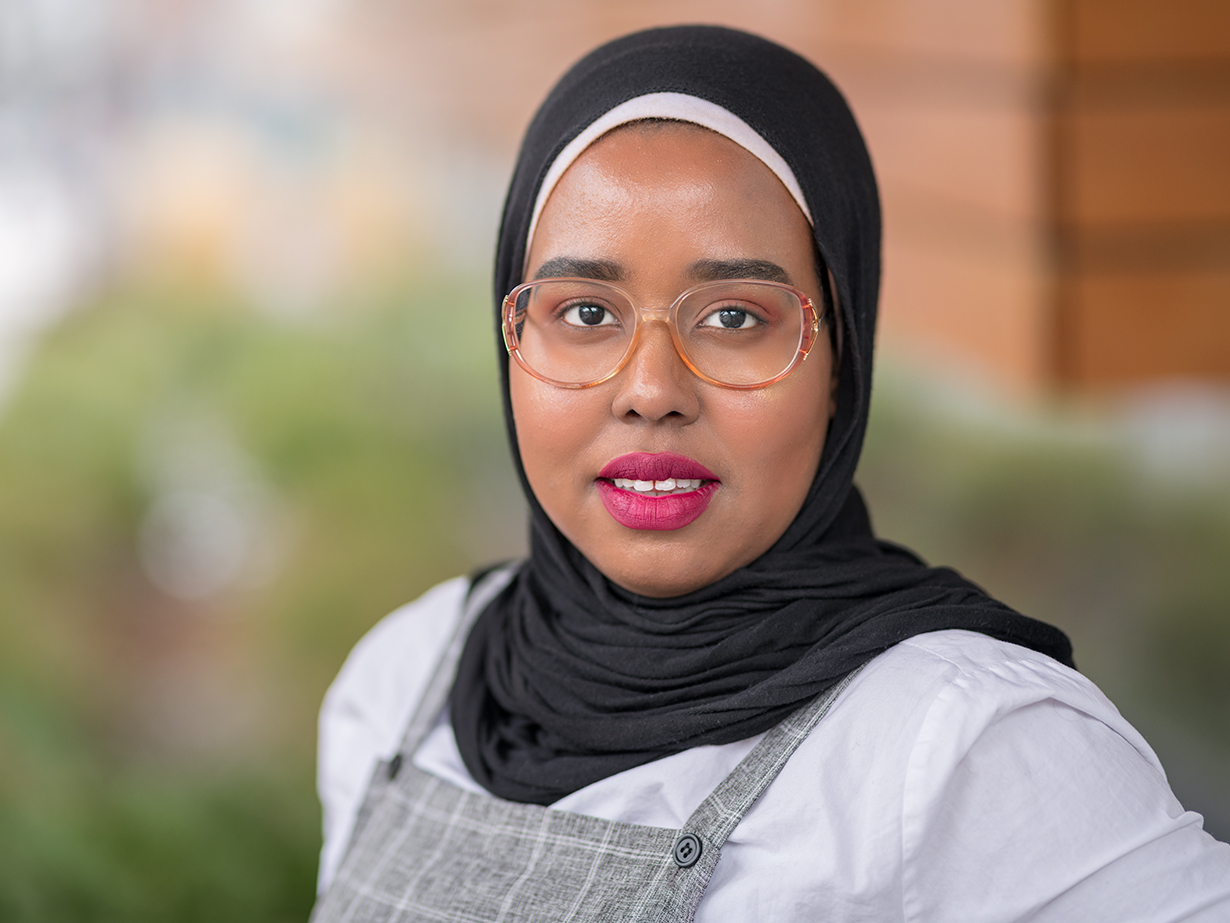 Farhia’s path to her new home in Portland called for courage and resourcefulness. She has faced repeated harassment about her skin color and her hijab, all while learning two new languages, attending seven schools, and helping care for six younger siblings. Yet she has stayed strong.

Farhia Ibrahim was born in 1995 in Mogadishu, Somalia. A decades-long civil war caused state collapse and famine, and despite international aid, conditions worsened for her family.

Growing up, she did not know any older female role models who were attending higher education and she never dreamed she would attend college. Education was not considered important for Somali women. Now Farhia, 22, and two of her six younger sisters are defying expectations by pursuing degrees at Portland State University.

Farhia was seven when she left Somalia with her mother and younger sisters to join her father in Egypt, where he was working. When he left a few years later to seek better employment in The Netherlands, the women moved into one room of a house shared with four other families.

Finally, at age nine, Farhia started school for the first time. She was thrown into Fifth Grade classes with no extra help. Her dark skin attracted bullying from her Egyptian classmates, but the teachers ignored the taunts. “When you don’t speak Arabic, but you know what they are saying, it hurts you,” she recalls. She felt alone.

Her mother responded by transferring her to a madrassa, a private Muslim school. There she took seven courses, including English. “I don’t even speak Arabic, how am I going to learn English?” she remembers thinking.

While Farhia struggled, her mother applied for U.S. refugee status. The application was approved just as the Arab Spring exacerbated conditions. The family arrived in Portland in May 2010.

At Century High School in Hillsboro, Farhia endured intolerance. “Because of my scarf,” she explains, pointing to her hijab. “Even the teacher. We had to stand for the pledge to the flag every Monday morning. The teacher said to me, ‘You have to take off what you are wearing.’ I said: ‘I can’t. It’s my religion.’ ” Because she refused to remove her scarf, the teacher forced her to stand outside the classroom every Monday morning during the pledge.

In her sophomore year, the family moved to Salem for more affordable housing, and her father joined them. At Silverton High, she and her sister were the only black students, and again felt they didn’t fit in. “I just focused on learning English,” she recalls. “Nothing else.”

When her family moved back to Hillsboro the next year, she enrolled at her third high school, Aloha High. Because she had fallen behind, she had to spend an extra year at Aloha. But by then, her English had improved.

Farhia had not considered college until her counselor steered her to Portland Community College. At PCC she earned good grades, gaining confidence through her schoolwork and inclusion in a more diverse community. When she transferred to PSU, she chose Special Education as her major. She had realized what she wanted to pursue: teaching kids.

Along with the academics, Fahria enjoys PSU’s diversity. She is not the only person of color; not the only girl in a hijab. On campus she has many Arabic-speaking friends.

But she still feels the sting of hate speech and does not feel safe walking in downtown Portland. Just a few months ago, she was harassed by a man while waiting for the Max downtown. “People randomly say oppressive things and talk about my scarf,” she says. “Sometimes I just wear my headphones and pretend I don’t speak English.”

For Farhia, naming her identity is complicated. “Somalia is where I am from,” she says. “But if I go back, they will see me as an outsider. I didn’t grow up there. I don’t have a passport. I’m not a citizen. Egypt is the same thing.”

After seven years, America is becoming home, she says. Still, her relationship with her adopted country is complicated. “I feel like it’s home,” she says. “But at the same time, it’s not. But I know it has to be.”