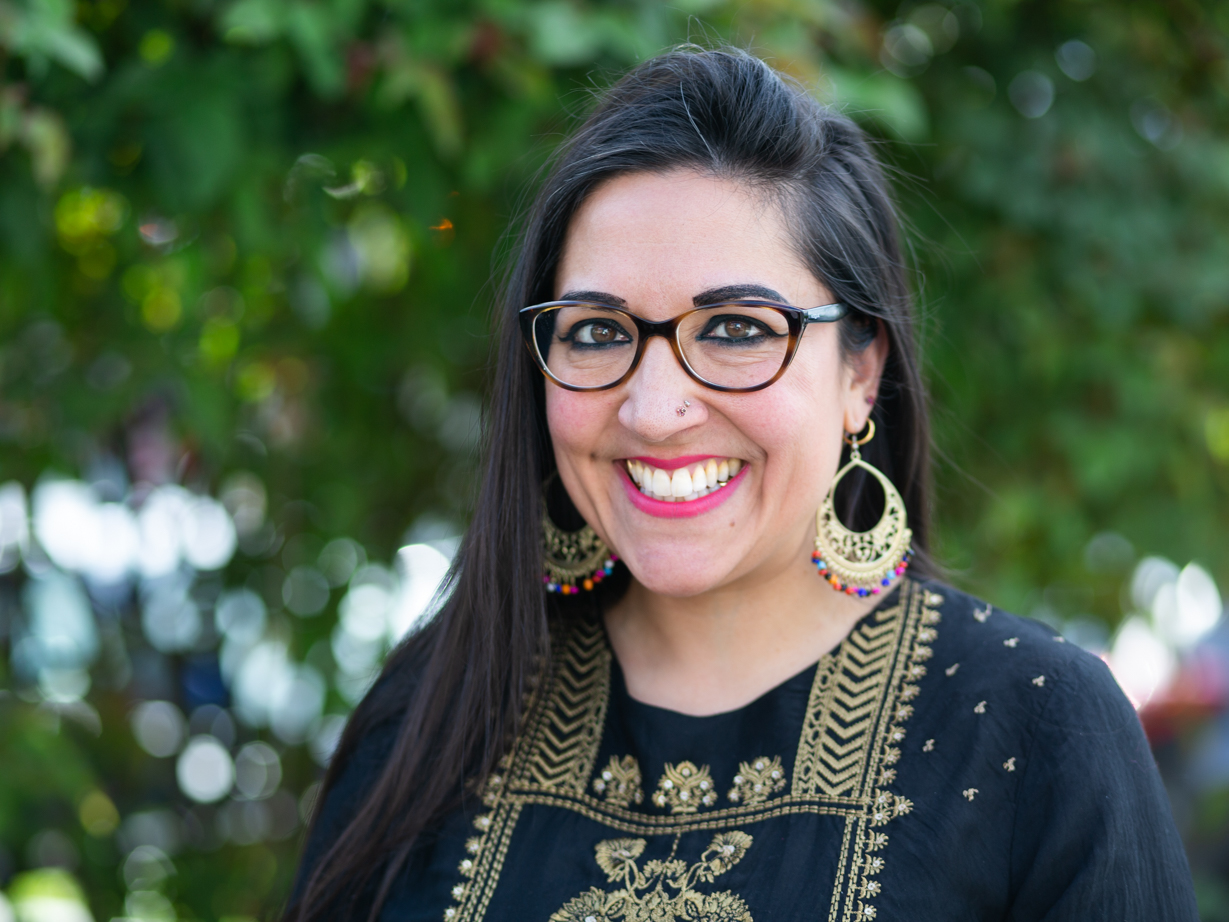 In the late 90’s, while employed at Powell’s Books and engaged in the workers’ effort to unionize, Gitanjali Hursh – known to friends and family as Anju – found herself going to a lot of parties.

Unimpressed with the same handful of guys always on the turntables, she knew, through a lifelong love of music and dance, that she had something different to offer.

So, armed with nothing more than a grocery bag full of Bhangra records and Brit Pop CDs, she made her debut as DJ Anjali.

Smiling at the memory of her first DJ experience, she says, “I’m sure it was because they were my co-workers, but instantly they all loved me. Everybody was dancing. And I super got the bug!”

Anjali was born in Oregon City in 1973. Her mother, a flight attendant, met and married her father, an Oregonian, while he was stationed in central India as a Peace Corps Volunteer. The couple moved to the U.S. when her mother was pregnant with Anjali and settled on her father’s family farm.

The change was shocking for her mom, an educated Indian woman unaccustomed to the rural lifestyle. “Where are all the brown people?” and “How do I get Indian food?” she wondered.

Despite Oregon’s lack of racial diversity, “we spent a lot of time with other mixed families,” Anjali recalls. “Wherever there was an Indian family, we would travel to see them.”

The family hopped from town to town around Oregon, and then to Tucson and Philadelphia, before returning to Oregon when Anjali was 16. Though being the new kid wasn’t always easy, she remembers feeling surprisingly comfortable navigating between the cliques of Black, White and Asian kids at school.

Her childhood memories are steeped in the sounds of Bollywood and her mother’s nostalgia for the popular Hindi films, music and dance. At the time, young Anjali mostly tuned this out. Instead, she choreographed dances to Madonna songs and performed them with gusto in the living room. She also preferred hamburgers to masala and her mother’s Indian cooking.

Not wanting to be made fun of for her family’s cultural differences, Anjali says, “I think I wanted to be white.” It wasn’t until her mid-20’s that she began to earnestly explore her Indian roots.

“It took a lot of time for me to feel that distance from my childhood, to be on my own terms,” Anjali reflects.

After studying oil painting at Portland State University, she followed in her mother’s footsteps to begin training in Kathak dance, a style from Northern India. She also brought home stacks of Indian art books from her job at Powell’s. Anjali was captivated by the explosion in popularity of South Asian authors like Jhumpa Lahiri. Half-jokingly, she refers to this transformational time in her life as “Education, part two.”

Once she started listening to old Bollywood, she quickly got hooked. Soon, Portland did too.

From humble beginnings spinning records for free at house parties, DJ Anjali and her partner, The Incredible Kid (Stephen Strausbaugh), were soon bringing the rhythms of India and the South Asian diaspora to sold-out clubs across Portland. Today, their monthly ANDAZ party – created in 2002 – is the longest running Desi dance party in the world.

After several years DJing to predominantly white crowds, Anjali decided to go all in, and gave up her day job. Over the last two decades, DJ Anjali and The Incredible Kid have cultivated a diverse following and found their way to the heart of Portland’s nightlife.

Their philosophy? Everyone is invited.

“I didn’t grow up in that tight knit Indian community. I grew up in a larger setting of family…,” Anjali notes. “So…if you enjoy [the music] then you should come dance!”

In addition to serving up booty-shaking sets of Bhangra and Bollywood, the duo just celebrated the six-year anniversary of Tropitaal, a monthly party where the hottest Indian and Latin American beats meet on the dance floor. They also travel across the country to DJ Indian parties and host two weekly radio shows.

Growing up the daughter of an immigrant in a biracial family, Anjali often saw parts, but not all, of her story reflected in the world around her. But through two decades of music research, record-hunting and Desi dance parties, her sense of identity has come into sharper focus.

“This is how I’ve met my people,” Anjali says.

One thought on “Celebrating Identity Through Music”