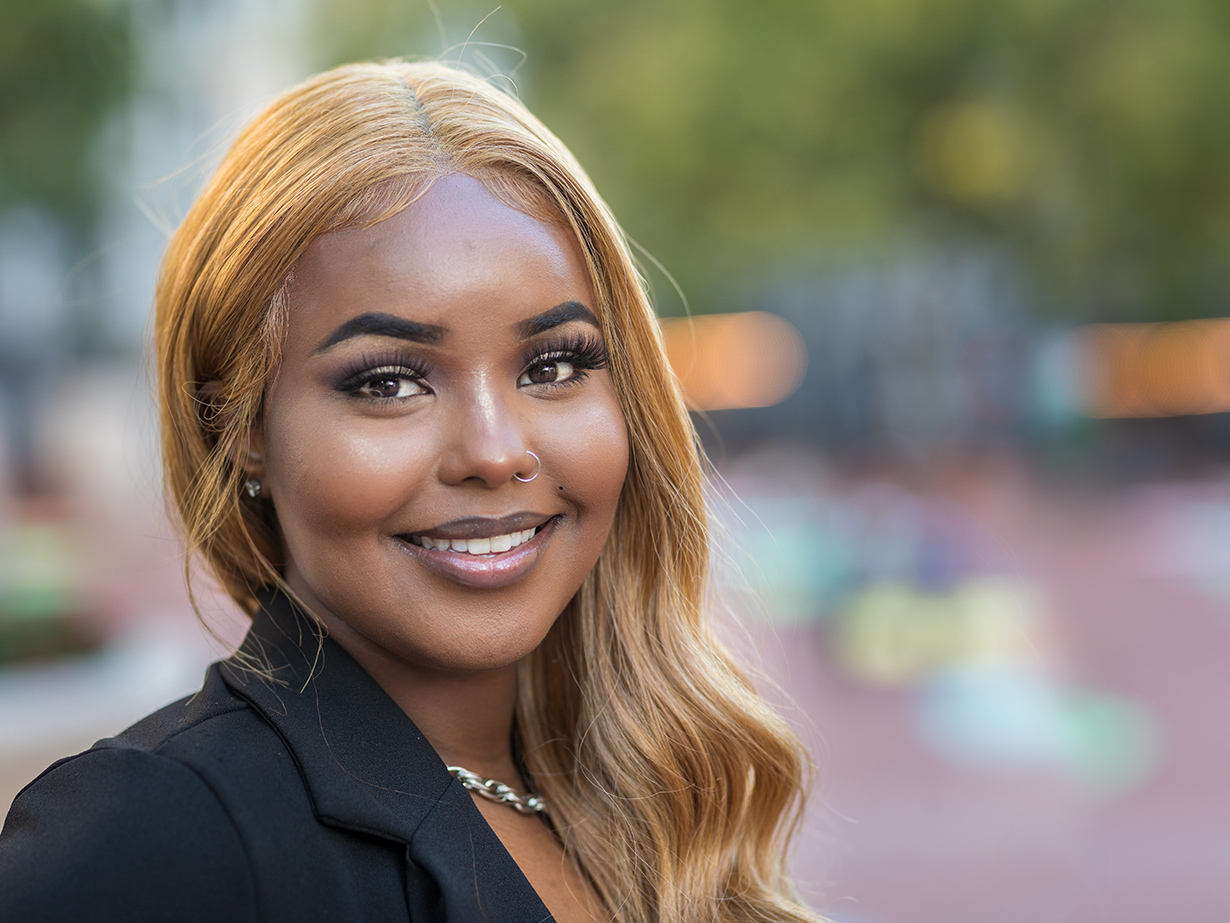 Thwak! The tetherball sliced through the air, wrapping around the tall metal pole. It was another victory for second-grader Faiza Jama. Tetherball was her battlefield, and she won every time. No one could tell her she couldn’t fight and win.

Jama was born in Hargeisa, Somalia, on April 20, 1999. She remembers a tight-knit community  where she could wander freely. Even when the family moved to the big city of Addis Ababa, Ethiopia, in order to begin applying for a U.S. visa, she would explore the new city and find her own way home.

Jama was a fighter from early on. “Don’t tell me I can’t,” she says, remembering the boys who refused to play soccer with her because she was a girl. Six-year-old Jama would play the game anyway. “They would play rough, but that didn’t stop me,” she says.

Jama’s family immigrated to the U.S. in 2006, settling near relatives in Beaverton, Ore. Jama started first grade and enjoyed school, but learning the new culture and language was a challenge. “I go from this world of everyone looking like you to being the only person of your kind,” she says.

The family soon moved to Portland, where Jama felt more at home. She eventually bonded with a couple of friends from Hmong, Hispanic and Russian families. They all saw themselves as jokesters, and the young women remain close today.

In fifth grade, Jama started wearing the hijab. She would cover herself leaving her house, take the hijab off during the school day, and put it back on to go home. “I couldn’t understand the reason I was wearing it, but I wore it because I thought it was what I should do when I was that age,” she explains.

Jama often clashed with her parents as she participated in after-school sports and other activities, trying to set an example she hoped her younger siblings could follow. When her younger sister wanted to play soccer in middle school, her mom refused. “So sophomore year of high school I played soccer,” she explains, “Because if my mom saw me doing that, I could set the example and open the door for my younger siblings.”

Along with playing soccer, Jama held positions in four clubs and was elected vice president of her senior class at Roosevelt High School. “I felt I could be the barrier- breaker,” she says. “I wanted to show other kids that if I’m doing it, a girl fresh out of Africa who had to learn English, then what’s your excuse?”

After high school, she craved a fresh start and in 2017 attended Fisk University in Nashville, Tenn., financing herself through scholarships. Moving to a new place, Jama felt she could leave the labels of her past behind. “While I was there I was able to rewrite my story. My life took a big turn,” she says. “Instead of feeling like I was in a box, I felt free.”

Freedom, she soon realized, meant that she didn’t have to do what was expected of her and become a doctor or lawyer as many immigrant parents hoped for their children. She finished her freshman year at Fisk and returned home to focus on supporting her family.

She soon became involved with I Am M.O.R.E. (Making Ourselves Resilient Everyday), a Portland based youth advocacy organization. “I Am M.O.R.E. allowed me to build a toolbox that I can carry with me no matter what happens. It made me aware that everything I need in this life I already have,” says Jama.

Now, she divides her time between her part-time job at Assumption Village–an assisted living facility in Portland’s Cathedral Park area–working with I Am M.O.R.E., and creating her own clothing line. Her vision is to create a brand that not only empowers but changes how people view themselves and others. “At a point, I believed the labels people put on me. The idea behind my brand is ‘Who are you without the labels you’ve been given  by society?’”

Jama is not worried about the future because she knows she will make it her own. “I’m always on the battlefield. For me the big question is that when there’s so much chaos in the world, what can I do to bring some more smiles? What can I do to calm that chaos and bring more positive light to this world?”

One thought on “Searching for Freedom”